Valentina Matvienko, a former diplomat and governor of Saint Petersburg, became Chairman of the Federation Council, the upper house of the Russian Federation, on 21 September 2011. She is the first woman in Russian history to hold the post.

Her position and close political ties to St. Petersburg native Vladimir Putin make Matvienko one of Russia’s most powerful women. Kampania (Company), a weekly business magazine, named her the most influential woman in Russia’s economy in 2007. In Forbes magazine’s 2008 list of the world’s most powerful women, she came in 31st. She is the only woman among the leaders of Russia’s 83 federal districts.

Valentina Ivanovna Tyutina was born on 7 April 1949 in the city of Shepetovka, Ukraine, then part of the Soviet Union’s Western flank, which had been ravaged during World War II. In school and university she was very active in Communist youth organizations, particularly the Komsomol, the Communist Party youth wing. At the age of 18 she moved to St. Petersburg, then known as Leningrad. While studying at the Leningrad Chemical-Pharmacological Institute, from which she graduated in 1972, she continued to further her political career through the Komsomol. 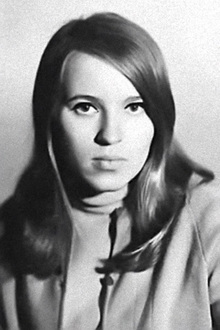 During the 1970s and 80s Matvienko held various positions in the Leningrad Communist Party and national branches of the Party. She was elected a deputy of the Supreme Soviet in 1989, at a time when the body had recently been granted real powers for the first time in Soviet history, during Gorbachev’s Perestroika. Matvienko was particularly vocal on committees dealing with family and women’s affairs.

In 1991, after graduating from the diplomatic academy, she was posted to Malta as the Soviet Union’s ambassador to the island nation. She remained there until 1994, when she returned to Moscow to take a departmental role in the Ministry of Foreign Affairs, where one of her main responsibilities was social-political organization. From 1997 to 1998 she served as Russia’s ambassador to Greece. Upon her return she became Deputy Prime Minister in the government of Evgeny Primakov.

Matvienko hung onto the position of Deputy Prime Minister during the tumultuous final years of Boris Yeltsin’s presidency, as the premiership was repeatedly passed on. She had special responsibility for welfare during this time. She kept the position when Vladimir Putin, a St. Petersburg native and reportedly a close political ally of Matvienko, took over from Yeltsin in 2000.

Vladimir Putin in 2003 appointed Matvienko as his permanent representative in the northwestern federal district. On October 5 of the same year, she was elected governor of St. Petersburg. She was pictured alongside then-president Vladimir Putin in campaign posters and pundits likened to the election to an approval ballot for Russia’s president.

The support of Putin was named as a key factor in her election victory, where she narrowly undershot the required 50% to win in the first round of voting, but easily won in the second count with 63% of the votes.

Matvienko has been quoted as saying she “pulled St. Petersburg out from where it was stuck in the end of the 20th century.” The governor has been successful in attracting domestic and foreign investment to construction projects in the city.

One of Matvienko’s most ambitious projects as governor of Russia’s northern capital has been the construction of the Okhta Center, a new commercial district, complete with a 300-meter skyscraper. The project has been controversial because of its location in an historical area of the city on the bank of the river Neva. UNESCO, which lists St. Petersburg as a world heritage site, said in September 2009 that the skyscraper would “damage the image of Russia.”

On 20 December 2006 Matvienko was confirmed in her position as governor by the Legislative Assembly of Saint Petersburg according to a new Russian federal law whereby governors are proposed by the President of Russia and approved or disapproved by regional legislative assemblies rather than elected by direct popular vote. 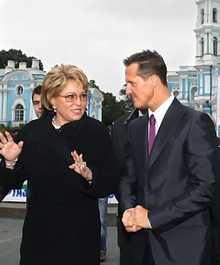 The Federal Security Service (FSB) in May 2007 claimed that it had unearthed an extremist religious group that had been plotting to assassinate the governor using explosives and hand grenades. Three of the suspects were acquitted by a jury in April 2008.

Matvienko has been awarded the second highest rank Order of Merit for the Fatherland (Rank II), as well as the USSR Order of Honor and Order of the Red Banner of Labor, for her state and public service work.

As of 22 September 2011 Matvienko is also a permanent member of the Security Council of the Russian Federation.

She is married and has a son, Sergey, a businessman.