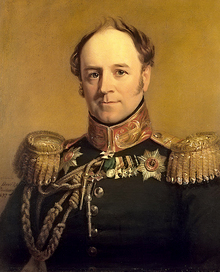 In 1798, at the age of 15, he enlisted into military service as a non-commissioned officer of the privileged Semyenovsky Life Guards regiment, due largely to the first-rate connections of his parents (his mother came to Russia in the suite of Sophie Dorothea Auguste Luise of Wurttemberg, who later became Empress Maria Feodorovna, while his father, a general, had been the military governor in Riga).

Benckendorff’s career developed brilliantly from the very start, and very soon he was promoted to lieutenant and became an aide-de-camp of Emperor Paul I. Just one year later, in 1801, the Emperor was assassinated in a coup d’état in which some historians believe young Benckendorff had an active part.

Benckendorff participated in the 1806 and 1807 campaigns against Napoleon while serving in General A. Osterman-Tolstoy's staff. He was promoted to captain after the battle of Preussisch-Eylau (February 1807) and then to the rank of colonel two weeks later. He went on to fight in numerous military campaigns (including the Russo-Turkish War 1809 – 1811), particularly distinguishing himself during the Patriotic War by becoming a provisional commandant of Moscow in autumn 1812 until the civil authorities returned to the city, at which time, he joined the pursuit of the French forces as they fled Russia. During the campaigns of 1813 – 1814, he commanded an independent Cossack cavalry detachment, operating at the enemy’s rear. 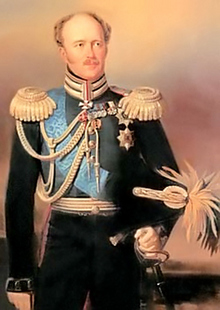 Some time after returning to Russia in 1815, Benckendorff became involved in the rites and ceremonies of freemasonry and in 1816 joined the ‘Amis Reunis Lodge’ (Lodge of the Reunited Friends) to which the famous Russian poet Aleksander Griboedov (author of Wit Works Woe) also belonged along with philosopher Pyotr Chaadaev and the future prominent Decembrist Pavel Pestel. Later, all three men would turn from Benkerdorff’s ‘brothers’ and ‘friends’ into subjects for surveillance and prosecution.

In two years’ time Benckendorff quit ‘Amis Reunis’ and in 1821, recalling his Masonic experience, presented a memo to Alexander I entitled ‘Message about Secret Societies in Russia.’ Alexander I disregarded the message (partly because he had been displeased with Benckendorff’s conduct during the disorders in the Semyonovsky Regiment in 1820), but when Nicholas I became the emperor, the document became evidence of the extraordinary perspicacity and loyalty of Benckendorff.

Meanwhile, Benckendorff served as aide-de-camp to Tsar Alexander I (1819–21) and, having been promoted to lieutenant-general, was given command of the cuirassier division of the guards (1821). From 10 November 1824 to 14 March 1825 he was the military governor of Vasilievsky Island (a major central district of St. Petersburg), in charge of the recovery and rebuilding of this district after a devastating flood on 7 November 1824. He showed great personal bravery and courage by saving citizens during the disaster.

In 1825, when the Decembrists attempted to prevent the succession of Nicholas I to the throne and force the establishment of constitutional government in Russia, Benckendorff stayed with Nicholas’ suite (later, he would play a leading role in prosecuting Decembrists) and from then onwards enjoyed the confidence and favour of the Emperor, probably spending more time with him than any of the Tsar’s other assistants.

Political police - a law unto itself

In January 1826 Benckendorff submitted a plan to Nicholas I for organizing a department of political police. When Nicholas created the Third Section of His Majesty's Own Chancellery, Benckendorff was placed in charge of both the gendarmerie and the Third Section, with responsibility for the activities of both the regular and the secret police (later the two offices were formally united). He held those posts until his death. 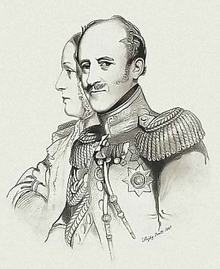 The Third Section was designed not only as a command centre for the repression of subversive machinations, but also an organ for ‘the study of Russia's condition.’ It was subordinate to the monarch alone.

The agents of the Third Section had to spy and report on religious groups, economic and supervisory administrations, foreigners, “suspicious or dangerous” persons, and so on. They also performed certain censorship tasks. Benckendorff himself acted as a go-between in the relationship between Aleksander Pushkin and Nicholas I (who had proclaimed himself Aleksander Pushkin's only censor).

Under Benckendorff's stewardship, the Third Section became much more than a mere political police force, devoting itself to social engineering on a grand scale with an aim to ‘eradicate abuse’ wherever it might be found in Russian society.

Its 1839 report to the Emperor boldly stated: ‘All Russia impatiently awaits change… The machine requires to be reworked afresh. The keys to this necessity are to be found in justice and industry. …[The Section is] convinced of the necessity, even of the inevitability, of the liberation of the serfs.’

Had such words been published in a journal, uttered in public, or even whispered in private by anyone other than a member of the Third Section, they would have been cause for instant imprisonment or exile. Yet the Third Section regularly issued such reformist recommendations without fear. The section’s 1838 report advocated the development of railways in Russia; the 1841 report called for special attention to public health; the 1842 report recommended lowering customs tariffs to foster economic development.

Benckendorff’s convictions reflected the consistently conducted policy of The Official Nationality, where the virtues of man were defined by adherence to the Orthodox Church (although Benckendorff was a Lutheran who converted to Catholicism in 1842), by the loyalty of the subject to his sovereign, and by his tireless demonstration of Russian patriotism. Censorship during the reign of Nicholas I was carried out in strict accordance with the official doctrine embodied in the trinity: Orthodoxy, Autocracy and National Spirit.

Being a faithful monarchist and an obstinate conservative, Count (since 1832) Benckendorff argued that ‘Russia’s past was admirable, its present is more than magnificent and its future is beyond anything that the boldest mind can imagine.’ This statement provided a basis for Russian historiography for many years after Benckendorff’s death.

The Third Section under Benckerdorff became a law unto itself coming close to establishing a system of thought control in Russia. Benckendorff was once confronted by Anton Delvig, Editor-in Chief of the Literaturnaya Gazeta journal who dared to complain that the journal was unlawfully closed by censors due to some liberal article it had published. Delvig risked making reference to the law as the article had previously passed censorship.

The Chief of the Third Section’s reply was “Laws are written for the subjects, and not for the authorities, and you don’t have the right to refer to them or use them to excuse yourself in your explanations with me” (the first part of the sentence later became a sort of proverb). As some contemporaries believed, Delvig’s untimely death in January 1831 (at the age of 32) was partly due to anxiety arising from regular troubles with the Third Section.

However, despite his key position in the heavy bureaucratic machinery of the Russian Empire, Benckendorff was far from being any sort of Iron Man; he was a jovial, sociable person and a womanizer. Contrary to common belief, Benckendorff never paid too much attention to the day-to-day activities of the secret police, leaving it to his subordinates while concentrating on more important issues and the Emperor’s personal assignments.

He was also terribly absent-minded and often suffered from a bizarre defect of forgetting his own name, and periodically had to be reminded of it or consulted his own visiting card. Therefore the spelling of his surname tends to vary according to the preference of individual non-Russian writers, e. g. 'Benckendorf', 'Bennckendorf', 'Benckendorff' (he himself adhered to the last form when not writing in Russian).

Aleksandr Benckendorff died Oct. 5, 1844 on his way to St. Petersburg from Baden, where he had gone for treatment. Having received the sad news, Nicholas I noted, ‘He made me quarrel with no one, but reconciled with many.’