Nikolay Viktorovich Podgorny was the Chairman of the USSR Supreme Soviet for almost 12 years – from 9 December 1965 to 16 June 1977. But his authority was reduced mainly to ceremonial duties: visits, meetings and awards ceremonies. 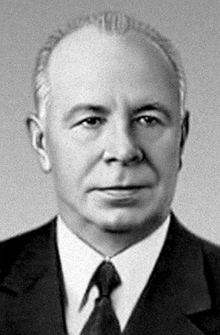 According to various writers and historians Podgorny himself claims to have faked the year of his birth. He was born in 1906 - not in 1903, as the official papers say. He needed these extra three years to join a militia unit combating robbers and bandits during the Russian Civil War in 1918-1920. He never changed his age back and throughout his life he remained three years older.

In 1921, when Podgorny was just 15, he became the Secretary of the local Komsomol (Youth Communist League) Committee. He graduated from the industrial college in Kiev in 1931 and was sent to a sugar factory in one of Ukraine’s regions. At the time, famine plagued many areas of the USSR, including Ukraine. Some historians quote Podgorny’s as once saying that he was afraid to let his children play outdoors as they might have been eaten alive by the hungry crowd. Later on, Podgorny was appointed the head of same regional sugar industry committee. That was the beginning of his quiet, unremarkable way to the top - not typical for many apparatchiks of that period.

In 1941, when Russia was drawn into World War II, Podgorny held the post of Deputy Head of the All-Soviet Food Industry Committee. In 1942 he had a quarrel with Anastas Mikoyan, an apparatchik who held various posts in the governments of Lenin to Brezhnev. Mikoyan sent Podgorny to supervise the evacuation of a sugar plant that was already under fire. The evacuation was completed and Podgorny reported his success to the top. But later on Mikoyan found out that his subordinate never went to the factory himself. For this Podgorny was stripped of his post. Ironically, he would replace Mikoyan as the Chairman of the USSR Supreme Soviet in 1965. 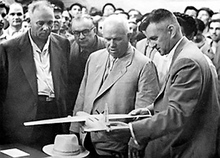 After the war Podgorny continued his career in Ukraine. There, on 26 December 1953, he became the First Secretary of the Republic’s Communist Party Committee. Many historians attribute his posting to his close relations with Nikita Khrushchev, who at that time held the top position in the Ukraine under Stalin.

Podgorny threw various parties and celebrations every time Khrushchev came to Ukraine and soon he was appointed Secretary of the Central Communist Party Committee of the Soviet Union. Podgorny, though, was displeased because he was given the supervision of the textile industry - not enough from the man who controlled one of the 15 republics of the Soviet Union. As a result his relations with Khrushchev began to deteriorate. During a meeting with a Vietnamese Communist Delegation, Khrushchev reprimanded Podgorny in public: “We brought you to Moscow, made you a Party Secretary! But you still think like an inexperienced sugar engineer!” 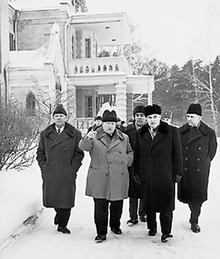 So Podgorny teamed up with other top party officials to overthrow Khrushchev. He managed to persuade Khrushchev to have a rest at the seaside. With Khrushchev gone, he took an active part in preparing the Plenum – a meeting of Central Party Committee members. Podgorny convinced leaders in his native Ukraine to support him in his endeavors. He was more active in the process than Leonid Brezhnev – the key figure of this plot who was reluctant to come back from his visit to East Germany for the decisive move. One more day of Brezhnev’s hesitation – and it would have been Podgorny who would have gotten the top job. But Brezhnev returned to Moscow – and after Khrushchev was toppled, his did not forget Podgorny’s help.

Shortly after that Podgorny made what many historians call his “biggest political mistake.” He supported Ukraine’s initiative to sign economic agreements with other countries without the consent of the USSR Central Party Committee. Brezhnev was not pleased with this and immediately appointed Podgorny as the Chairman of the USSR Supreme Soviet.

Witnesses say that Podgorny took this position as an insult – he did not want to be a “ceremonial puppet.” He tried to change the name of his post, calling himself “The President of the USSR.” But the initiative was quickly nipped in the bud by the lower Party Secretaries.

However, Podgorny was the one who implemented key measures that strengthened the role of the Soviets (national and regional parliaments). He introduced immunity for deputies. Thanks to Podgorny they obtained the right to control and audit local enterprises. This legislation was later copied by Bulgaria and Mongolia.

At the beginning of the 1970s it became clear that Brezhnev’s grip on power was getting tighter by the day. And Podgorny could not hinder the process. In his position he even had to sign various decrees to award Leonid Ilyich Brezhnev all the top Russian orders and medals to make the Soviet Leader even more “prominent.” By 1977 Brezhnev had made a decision to merge the Communist Party and the Supreme Soviet. On 16 June he forced Pogdorny to retire, saying “Sorry, Nikolay, but that’s what workers and peasants want.”

Podgorny went into oblivion. He spent most of his time at his dacha near Moscow. He didn’t go hunting like he used to. He played chess and took long walks in the forest. He was about to write his memoirs when he was struck with cancer. He died in hospital on 11 January 1983.