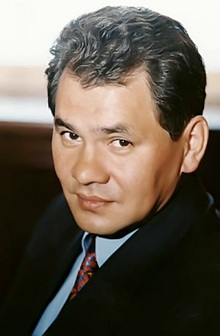 Sergey Shoigu was born in the town of Chadan (Tuva Republic, the USSR), into a family with deep historical roots dating back to nomads and cattle-breeders. His father held high positions within the Communist Party; his mother was an economist.

At the age of 12, Shoigu took part in an archaeological expedition in Tuva and spent several months working in a flooded area of the Sayano-Shushenskaya hydroelectric station. In 1977 he graduated from the Krasnoyarsk Polytechnic Institute and received a diploma as a construction engineer. For about 11 years Sergey Shoigu worked in various Siberian construction trusts, climbing the career ladder from foreman to managing director. The young Shoigu, together with other enthusiasts, organized voluntary rescue teams that worked in natural disasters zones.

1988 was the beginning of Sergey Shoigu’s political career. He became a functionary in the Abakan branch of the Communistic Party of the Soviet Union. In 1989 he held the post of Inspector of the Krasnoyarsk Regional Committee of the Communist Party. Shoigu remained a member of the party until 1991, when it was officially disbanded.

In 1990 Shoigu left for Moscow, where he applied for a post as the head of the Committee rectifying the consequences of the Chernobyl atomic station accident, but was unsuccessful. However, very soon after, he became the Deputy Head of the State Architecture and Construction Committee of the Russian Federation. The job involved dealing with a lot of paperwork and was not fulfilling for the young and ambitious Shoigu. In less than a year Sergey Shoigu reached his goal to actively work in sphere of emergencies and disaster relief when he was offered the post of Head of the Russian Rescue Corps. This organization was founded in 1990 and joined together several voluntary rescue parties, formed by mountaineers who worked on elimination of consequences of disastrous earthquakes in Armenia.

The Rescue Corps started their work almost from scratch, confirming staff and developing a work strategy. Within the first few months Shoigu decided to form a number of rescue parties across Russia, to be able to effectively and quickly react in cases of emergencies. Sergey Shoigu and his Corps played a direct role in the August Coup (19-21 August 1991), a confrontation between hard-line members of the Communist Party seeking a return to the old system of government, and reformers led by Boris Yeltsin and other political leaders. Shoigu supported Yeltsin, and the latter, in response, furthered the expansion of the Rescue Corps, widening its responsibilities and merging it with civil defense forces to create the State Committee on Emergencies.

Sergey Shoigu participated in armed conflict management in North and South Ossetia, Abkhazia and Ingushetia. In 1993, during the Constitutional Crisis in Russia (a political confrontation between the Russian President and the Russian Parliament) Shoigu proved his loyalty to Boris Yeltsin one more time.

In 1994 the State Committee on Emergencies, having adopted the functions of a few others related bodies, was transformed into the Ministry of the Russian Federation for Affairs of Civil Defense, Emergencies and Disaster Relief with Sergey Shoigu at its head. That same year he became a member of the Security Council of the Russian Federation. Shoigu was among those who discussed the question of initiating a war in Chechnya in 1994, but his personal position concerning this issue is unknown. 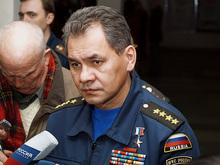 Sergey Shoigu has been involved in different political movements and blocks (Choice of Russia in 1993 ad Our Home – Russia in 1995) and actively participated in Boris Yeltsin’s presidential election campaign in 1996. Still, he is probably best known for his work as the leader of the Russian pro-government electoral block, Unity, created in 1999 before the State Duma elections (the lower house of the Russian parliament) that year. Unity was supported by Russia’s President Boris Yeltsin, the Prime Minister Vladimir Putin and tens of Russian governors. The rise of Unity was meteoric given the short time it had to create an identity, plan its campaign strategy and carry out its ambitious objectives. In the elections on 19 December Unity received 23 percent of the vote and won 72 of 441 seats. Shoigu did go to the new State Duma but remained Emergencies Minister.

During the presidential elections in 2000 Sergey Shoigu and his party fully supported Vladimir Putin, who became the President of Russia. In 2001 Unity merged with another political block, Fatherland – All Russia, to become United Russia, which later became the leading party in the State Duma election in 2003 and 2007. In 2008 Dmitry Medvedev was elected President of Russia. He also gained support from this large political organization and its co-leader Shoigu.

Sergey Shoigu has become known as the Emergency Minister who demonstrates his personal involvement in rescue works during all major disasters. He created a team of like-minded people, which has apparently helped him to hold his post continuously over the past 11 years – a record among all Russian post-soviet high-ranking politicians.

Shoigu has shown great interest and diligence in integrating related institutions into his department. Nowadays the Ministry of Emergency Situations is a system of various bodies: search-and-rescue services in all regions of Russia, civil defense forces, the Civil Defense Academy, the Rescue Training Centre, the Research Studies Institute and the Centre of Monitoring and Prediction of Emergencies.

In May 2012 Shoigu became governor of Moscow region, after his candidacy was unanimously approved by Moscow Region Duma. However in November, 2012 President Vladimir Putin appointed Sergey Shoigu to the new post, Head of Defense, after firing previous minister, Anatoly Serdyukov, from this position.

Sergey Shoigu is highly esteemed in his native Tuva. A street has been named after him in the town of Chadan, where he was born, and a mountain peak in the republic also bears his name.

Sergey Shoigu is married and has two daughters.