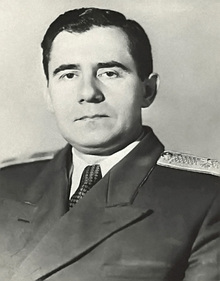 Andrey Gromyko was the Soviet Union’s Minister of Foreign Affairs and top diplomat for almost three decades. In all, he served for 48 years as a diplomatic or government official with the USSR and was regarded as a prodigiously capable negotiator in the Soviet Union as well as in the West. Gromyko played a central role in negotiations with foreign powers spanning from the Second World War up until the beginning of the perestroika era. He served under five separate Soviet Union leaders, from Stalin to Gorbachev.

Andrey Andreevich Gromyko was born on 18 July (5 July, according to the Orthodox Julian calendar in use at the time) in a Belorussian village called Stariy Gromyki. It was traditional for residents of the village to adopt its name as their surname, so Andrey’s family was Gromyko. Belarus was then part of the Russian Empire. Soon after the 1917 Communist Revolution in Russia, most of the country became part of the newly formed USSR. Gromyko was an active member of the Communist Party in school and in college. He studied in a technical college in the nearby city of Gomel, and then in Borisov, an industrial city in Belarus. After graduation, he continued his education in the Minsk Economic Institute, where he specialized in agricultural economics. He attended college part-time, so that he could teach in a local village school, where he became principal while he was still in his early 20s. Gromyko was offered a place in a post-graduate degree course in Moscow. There, he began to learn English, which he was to master as a 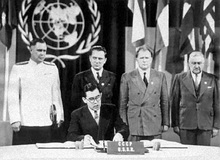 diplomat, though he always used a translator to allow him breaks to think during negotiations. His university dissertation was on American agriculture; though he might not have known it at the time, his knowledge of America would allow him to get his foot in the door of the diplomatic corps.

As a result of Stalin’s purges of government and Communist Party officials, the Foreign Ministry was stripped of some of its finest staff. A young, well-educated son of a peasant family, Gromyko ticked a lot of boxes in the ideology of the Stalin era. Even though he lacked any diplomatic experience, in the spring of 1939 he was appointed the head of the Americas section of the Foreign Ministry and suddenly became responsible for diplomatic relations with the countries of the American continent. On 1 September 1939 Germany invaded Poland, beginning the Second World War. Gromyko was instrumental in managing the edgy co-operation between the U.S. and the USSR during the War. In August 1943 he became the Soviet Union’s ambassador to Washington. 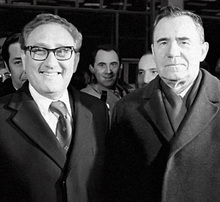 aftermath, such as those in Potsdam and Yalta over military co-operation and post-war planning as well as those in Dumbarton Oaks and San Francisco which resulted in the creation of the United Nations.

In 1949 Gromyko became the First Deputy Foreign Minister of the Soviet Union. The Foreign Minister at the time was Vyshinsky, a close ally of Stalin and a key organizer of the purges. Vyshinsky, fearing Gromyko might replace him as the top diplomat, stripped him of his First Deputy title in 1952, and made him the Soviet Ambassador to the UK, a lower ranked, yet still prestigious, position. After Stalin’s death in 1953, many of the Communist old guard were denounced and lost their positions when the extent of his repressions and purges became clear. Vyacheslav Molotov, of the famous “Molotov-Ribbentrop Pact” of non-aggression between the Soviet Union and Germany, again became Foreign Minister, and appointed Gromyko as his First Deputy. The two men had worked together closely during the Second World War.

Gromyko became Foreign Minister in 1957, a position he was to hold for almost thirty years, until

1985. The Foreign Minister’s negotiating style was legendary. In the West he was known as “Comrade Nyet,” apparently for his stubborn demeanor and refusal to give concessions. He would wear down his negotiating partners by arguing for hours over the most trivial of details, before tackling the meat of the issue, teasing out small victories, which he would trade for larger concessions later in the negotiations. He had an impressive memory, which allowed him to draw on countless legal and diplomatic arguments, names, dates and facts during discussions. Gromyko later commented on this style: “Better ten years of negotiations than one day of war.”

Gromyko kept aloof from his foreign counterparts. His son later wrote that his father advised him to never make friends with foreigners – it is only a hindrance to a diplomat. The British Foreign 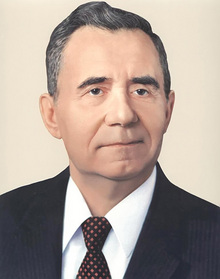 Minister George Brown, in an attempt to get closer to the Soviet diplomat, once addressed him as Andryusha – an informal form of Andrey – but he was quickly rebuffed by “Comrade Nyet” who asked to be addressed only as Andrey Andreevich.

The near thirty years that Gromyko held the position of Soviet Foreign Minister were among the most tense in modern diplomatic history. The U.S.

In 1985, Gromyko nominated Mikhail Gorbachev as General Secretary of the USSR. When later asked if he had made a mistake in nominating the reformer who presided over the dismantling of Communism, Gromyko replied that he did not regret the decision. He was replaced as Foreign Minister that year by Eduard Shevardnadze. After a few years as a Supreme Soviet Deputy, Gromyko retired in 1988.

Gromyko received five Orders of Lenin and was twice awarded the Hero of Socialist Labor medal. He and his wife Lidiya had a son Anatoli, and a daughter Emiliya, who were both academics.

Andrey Gromyko died on 2 July 1989 and is buried in Moscow’s Novodevichy Cemetery.