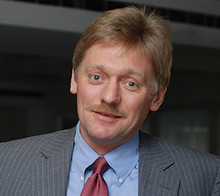 Dmitry Peskov is Vladimir Putin’s spokesperson. His voice usually is heard when the situation in question is critical or controversial.

Dmitry Peskov was born in Moscow. His father, Sergey, headed the Russian diplomatic mission in Pakistan, a fact which seemed to affect Peskov's career choice. In 1989 he graduated from the Asian and African department of Moscow State University and got a job in the Foreign Ministry.  In the course of ten years, Peskov rose through the ranks to become the first secretary of the Russian embassy in Turkey.

In 2000, Russian president Boris Yeltsin resigned and Vladimir Putin came to power. The new head of state made Peskov chief of the Public Affairs Office. In 2004, he became the first assistant of the President’s press-secretary, assuming the right to speak on President’s behalf.

The situations Peskov comments on are usually troublesome or at the very least controversial. This is why his nickname is “the bad news press-secretary”.

In 2006, Peskov commented on the assassination of Russian state security officer Aleksandr Litvinenko, who died in London from polonium poisoning. “It's impossible to even imagine that the Russian government is behind this”, he said, adding “this is obviously a provocation to discredit Vladimir Putin’s government”.

In March 2007, Boris Berezovsky, a Russian businessman and one of the world’s richest persons living as a political refugee in London, said that he wanted to organize a revolution in Russia. Peskov commented on his statement, saying that Russian authorities saw Berezovsky as a criminal and hoped that these incautious words would cost him his refugee status. 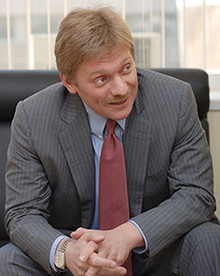 In the same year, on April 14 and 15, “Marches of Disagreement” were scheduled to take place in Moscow and St. Petersburg. The members of various parties and movements who were opposed to the current government wanted to express their discontent by marching through the main city streets. In both cities, the authorities prohibited the marches, and in both cities the marches took place regardless, resulting in conflicts with the police. According to Peskov, as he addressed Reuters, the police forces had just tried to keep order and to avoid provocations. However, according to newspapers and witnesses, the policemen's actions had been cruel and hardly legal, and many protesters returned home with broken ribs and concussions.

On April 17 2007, Peskov assured the audience of the Russia Today TV channel that Vladimir Putin would not be elected to a third presidential term. One year later, Dmitry Medvedev replaced Putin as the head of Russian Federation. Putin became Prime Minister and made Peskov his spokesman.

By 2011, many Russians came to consider the ruling United Russia party founded by Vladimir Putin to be "the party of crooks and thieves”. This nickname, invented by the blogger and corruption fighter Aleksey Navalny, became extremely popular over the course of several weeks. People began to lose their trust in the government, with more and more people expressing their dissatisfaction day after day.

In August 2011, Putin roused the Russian internet after he participated in an archaeological expedition on the Sea of Azov. The Prime Minister dived into the water and returned holding two ancient Greek amphorae, both of them squeaky clean. All the headlines screamed about Putin's great finding, though the whole situation left many questions to be answered. Only in October did Dmitry Peskov confirm that the amphorae had been purposely placed at the site of Putin's dive by archaeologists. "But that's completely normal", he said, "and there is no malevolence here”.

That autumn, Vladimir Putin announced his intention to run for President in 2012. It was to be his third presidential term.

On November 21 2011, Putin attended the boxing match between Jeff Monsoon and Fyodor Emelyanenko. Emelyanenko won, and when Putin stepped into the ring to make a speech, the audience suddenly began to hiss and chant "Putin, go away!" The official TV networks replaced the chanting with applause, but the original version of the video crept up on Youtube. Peskov also commented on this occasion: he said, the audience had been hissing away Monsoon, not Putin. 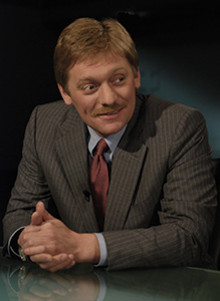 Rallies supporting the government took place as well, but there was much talk as to whether these meetings were arranged by pro-government forces. The major TV networks remained silent about the situation.

The government did not make any comments on the protests, but Peskov assured the journalists that the authorities were glad to see the development of Russian civil society. According to him, the majority of Russians respected the ruling party and wanted Putin to become President again. Peskov was sure that Putin would win.