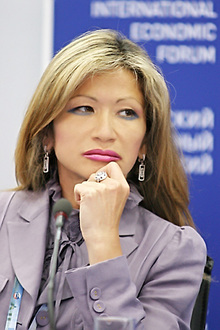 She dreams of writing a book that will rival the Harry Potter saga but spends her days editing speeches of Those Who Must Be Named. Dzhokhan Pollyeva has been a speechwriter for three Russian presidents - a job, she says, that's more analytical that creative. And while she rejects the notion of putting words into presidents' mouths, by all accounts, Pollyeva's role is far greater than that of an information officer.

Shunning the limelight, Pollyeva is a must-know figure for Kremlin insiders. In fact, she is one of the longest-serving officers of the presidential administration, with more than a decade-long stretch at the Kremlin.

Despite a Ph.D in law, Pollyeva never attempted to become part of the legal system. Instead, she embarked on a bureaucratic career within the youth organization of the Communist Party. When the Soviet Union fell apart, Pollyeva effortlessly transitioned from one political system to another, becoming a consultant for the Presidential Administration in 1992. In the mid-1990s she entered a new field, becoming a vice president of one of Russia's leading news agencies Interfax. But after just two years, the Kremlin pulled her back.

She is now in charge of the referents' desk - the department entrusted with putting together presidential speeches. And while she has sought to play down her role, some Kremlin insiders have credited Pollyeva with cutting down the annual State of the Nation address to almost half its former size. (The first State of the Nation address under Pollyeva’s responsibility was delivered by Boris Yeltsin in 1998. It was 14,815 words long. The 2008 address delivered by President Dmitry Medvedev contained 8,422 words).

Described as persistent and at times impulsive by her subordinates, Pollyeva has earned a reputation as a tactful and sensible specialist among her supervisors. Born and raised in Turkemenistan, she is not devoid of eastern cunning and is not shy of using her female charms. Bright make-up, tight jackets and above-the-knee skirts are the hallmarks of her style, adorned with a generous dose of French perfume. In the predominantly male presidential administration of the late 1990s and the early 2000s, it was a poignant deviation from the norm.

Yet, Pollyeva herself insists that government officials have no gender - or do they? In a recent interview she said, "a woman making a career should once and for all forget about all the benefits granted to women but never about the fact that she is a woman." No wonder Pollyeva sees no need for introducing gender-based quotas for governmental offices. 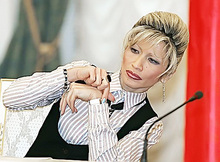 Having avoided the spotlight for most of her career, Pollyeva recently began opening up to the media, giving interviews and writing op-eds. This has led to speculation that she may be grooming herself for a new position, especially following rumors of President Medvedev allegedly striking whole paragraphs from speeches she was in charge of.

If this really happens, she may finally get some time to nurture her literary ambitions. After all, the Kremlin is sure to hold no less intriguing secrets than the Hogwarts School of Witchcraft and Wizardry.

Pollyeva is divorced and has a son.