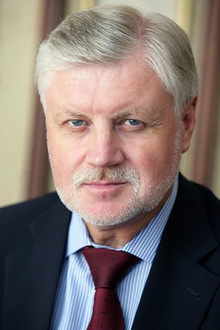 Early childhood, love of geology, and service in the Russian army

Sergey Mironov was born and raised in the town of Pushkin, a suburb of St. Petersburg (at the time known as Leningrad). According to Mironov, he led a fairly typical Soviet childhood, living in a communal apartment, and going on summer camping trips. “We had a tight living, as many people did those days,” said Mironov in an interview, “but I have only good memories of my childhood”. It was during one of his summer camping trips that Mironov would discover his first hobby, a passion which he would eventually choose to pursue as a first career; a profound love of rocks and minerals.

“Each summer all the parents from our apartment building took turns in providing cultural entertainment for all the children of our building. They took us on cultural trips to museums or to the river Popovka, and it was during those trips that I saw petrified remains for the first time, and geology became my life-long passion”, said Mironov, who began collecting stones even as a child and filling his house with rock specimen. “My mother scolded me and tried to throw the rocks away, but I was against it”. 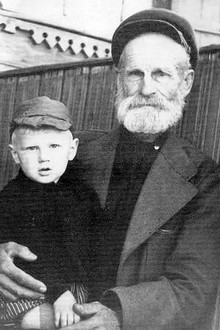 Sergey with his grandfather Feodor, 1956 (Photo from http://mironov.ru)

Mironov would continue “collecting rocks” into adulthood, eventually receiving a degree in geology from the Plekahnov Geology Institute in Petersburg and amassing a quantity of rare minerals so large that he eventually donated it to a geology museum, a collection he has stated that he intends to add to.

Mironov served in the Russian army paratrooper corps from 1971 to 1973, enlisting of his own free will even though he had the right to postpone his service for another three years on account of his enrollment in the university.  According to one of his interviews, he mentioned that he had no idea exactly what service in the paratrooper division meant other than jumping out of airplanes.

“My heart stopped dead for two reasons. The first reason, I’ll be honest, was from fear.  I had a powerful imagination, and I immediately envisioned two images before me: the first was I fly straight to the ground, and my parachute won’t open, and I curse the moment when I agreed to serve in the paratrooper corps.  And the second feeling was the opposite; the thoughts were joyful, and went something like, ‘Wow, how cool!  I’m going to be an offensive soldier…they’ll teach me to fight…Give me a blue beret…the girls will love it’, and right when I had the second thought, I boldly said ‘I accept’."

Entry into politics and founding of the Fair Russia Party 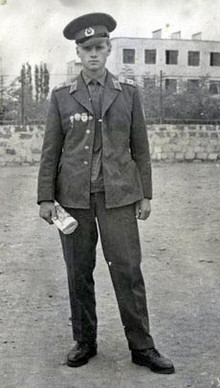 Mironov entered the national political scene in 2001, after having working in the St. Petersburg political arena. He was nominated by President Putin for the position of Speaker of the Federation Council and won by default, not having any opposition. It is a position he held until 2011. During his early years in the Federation Council he supported Putin, but politically remained independent until 2003 when he became chairman of the Russian party of life, a separate political party from Putin’s United Russia. It should be noted, however, that because of Russia’s political party system, membership in one party does not denote absolute opposition to others, and Mironov has historically supported both Putin and Medvedev. Mironov’s later support of Dmitry Medvedev, however, seemed to signify a gradual distancing of himself from Putin.

In 2004 Mironov ran for president against Vladimir Putin, however, he was never considered to be a serious candidate, as Mironov was quoted as saying before the election that “We all want Vladimir Putin to be the next president”. However, as the Presidency shifted to Medvedev in 2008, during the course of Medvedev’s term Mironov aligned himself more and more with Medvedev’s policies of technological innovation and growth, seemingly signifying a gradual departure from Putin’s policies. By December of 2011, Mironov declared publicly that “Putin must go. I don't see any willingness by Putin to change the political system. He believes monopoly of power is good.”

In 2006, the political party Fair Russia was formed out of a merger of the Rodina party, The Russian pensioners party, and Mironov’s Party of life. The merger itself was an attempt by the parties concerned to consolidate their efforts behind the success of the Rodina (or “motherland”) party to try and gain a higher percent of seats in the State Duma (Russian senate) elections of that year. The merger was a success, and the party gained momentum in the election that followed, picking up a number of seats and realigning the political map in Russia. Mironov was elected to be the party leader, a position he also held until 2011.

Fair Russia is described by Mironov to be a party based on a social democratic platform, one which he claims is the only real opposition voice to Putin’s United Russia party. However, attempts to convince Gennady Zyuganov’s Communist Party of Russia to merge with Fair Russia have been repeatedly rebuffed. Zyuganov has even gone as far as call  Fair Russia’s socialist stance a “Façade”.

Mironov claims that the socialism espoused by Fair Russia is what they call a “new socialism of the 21st century”, one where the society’s focus is squarely placed on the individual, and it is the role of the state to facilitate and aid in the individual’s needs. In essence, the state serves the individual, and not vice versa, as would be the case in a more traditional socialist platform. As a result, Fair Russia has positioned itself as an alternative to the Communist Party of the Russian Federation.

2011 and the presidential election

Although Mironov has publicly supported several of the initiatives, programs, and ideas set forth by Vladimir Putin and Dmitry Medvedev, he has sometimes been at odds with the United Russia party itself. In 2011 he was recalled from his position in the State Duma by the city of St. Petersburg, thereby effectively ending his term as speaker of the Federation Council. However, his removal from the post he held for 10 years did not end his political ambitions. In December of 2011 Mironov was nominated by Fair Russia to be their candidate to run in the 2012 Presidential Elections on March 4th, 2012. He is running on a social democratic platform of ‘literal interpretation of the constitution’, holding repeat elections after the highly contested State Duma elections in December of 2011, introducing a limit on presidential terms, and readjusting Russia’s 13% flat tax to better accommodate the different classes. 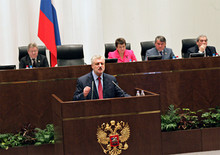 Final speech of Sergey Mironov at Federation Council. May 25, 2011 (Photo from http://mironov.ru/)

Mironov has not been spared the trials of political and national satire. According to some sources, just before the parliamentary elections in 2003 the Party of life with Mironov’s endorsement presented a plan to protect the Russian Desman, a semi-aquatic and unique species of rodent in the Volga, Don, and Ural River regions. However, Mironov claimed later that he had NEVER? endorsed such an initiative as presented by the Party of life, and that the party had never engaged in the protection of the wild rodent. Still, the image of the Russian Desman (or in Russian, ‘vykhukhol’, a rather humorous term) has stuck with Mironov ever since as a satirical way for his opponents to highlight what they consider to be Mironov’s folly. In response to the Russian Desman affair, Russian politician Boris Nemtsov said the following, “You see, anyone who came up with the name ‘vykhukhol’ cannot be president of the Russian Federation – we have nuclear weapons to deal with, after all”.

Mironov holds 5 post-graduate degrees, including an education in geophysics, engineering, and law.  He has been married three times, and has a son and a daughter.