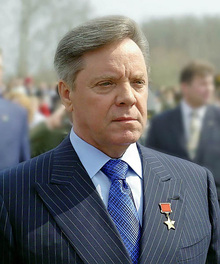 Boris Gromov is a prominent Russian military and political figure.

Boris Gromov was born in Saratov into a working-class family. His father was killed while fighting Nazi invaders on the Dnieper River when Boris was just a few months old.

In 1962 Boris Gromov graduated from the Suvorov Military School in the city of Kalinin (now Tver). After that he attended the Higher Combined Arms Command School in Leningrad (now St. Petersburg) and in 1965 was commissioned into the Soviet Army. After graduating from the Frunze Military Academy in 1972 he went on to a variety of command and staff appointments, serving in the Turkmenistan and Northern Caucasus military districts. As he advanced through his military career, Gromov received the ranks of major, lieutenant colonel and colonel.

During the Soviet campaign in Afghanistan (1979-1989), Gromov performed three tours of duty. From 1980 to 1982 he commanded a motorized rifle division, which was a part of the Fortieth Army. Upon his return to the Soviet Union, he attended the Voroshilov Military Academy of the General Staff, graduating in 1984 as a major general.

In 1985-1986 he was the representative of the Armed Forces of the Soviet Union in Afghanistan.

In 1987 Gromov returned to Afghanistan as the Commander of the Fortieth Army. He received the highest military award - the Golden Star of the Hero of the Soviet Union - for the development and successful realization of “Operation Magistral.” The operation is thought to be the largest and the most successful action of the Afghanistan campaign. It lifted the siege of the city of Khost, situated in eastern Afghanistan on the Pakistani border. Its main aim was to open the road from Gardez to Khost, which was blocked by Mujahidin forces, in order to deliver supplies to the population and Afghan government troops in the besieged city.

According to Boris Gromov, “the main result of the conducted operation was a lift of the months-long military and economic blockade of Khost. At the same time it frustrated the plans of the leaders of the Seven Party (Mujahidin) Alliance to break the Khost district away from Afghanistan and create an autonomous Islamic state on its territory.”

In 1989 Boris Gromov led the withdrawal of the Soviet forces from Afghanistan, which was completed in February 1989. He devised a plan for the movement of troops across the Salang Pass and the operation was completed without losses. Gromov later admitted that during the preparation for withdrawal he did not follow orders from Moscow Headquarters to fire on field commanders. The Soviet command had an unpublicized agreement of neutrality with these commanders during the withdrawal. Gromov ordered his troops to fire upon unoccupied ravines, so as to avoid any serious bloodshed.

According to his official biography, Boris Gromov was the last Soviet soldier to leave Afghanistan on February 15, 1989. Although, in one of his later interviews, Gromov mentioned that he left Kabul a week before the withdrawal was completed.

In 1989 Boris Gromov received the rank of colonel general. His next assignment was that of Commander of the Kiev Military District. In November 1990 he was appointed First Deputy Minister of the Interior, holding the post until August 1991.

In August 1991 several members of the Soviet Union's government made an attempt to take control of the country from Soviet president Mikhail Gorbachev. This group of hard-line members of the Communist Party, called GKChP (acronym for the State Committee of the State of Emergency), brought tanks and troops into Moscow to enforce their orders.

During this historical event, known as the August Coup, Boris Gromov was ordered by the GKChP to prepare his internal troops for an attack on the White House in Moscow. Having consulted General Pavel Grachov, Gromov spoke out against the attack. The coup failed after the army refused to attack the reformers, led by Boris Yeltsin and other political leaders. Later Boris Gromov was accused of involvement with the GKChP, though afterwards he was offered an apology. 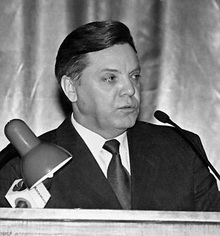 In the aftermath of the unsuccessful coup, Gromov was appointed First Deputy Commander of the Soviet (later Commonwealth of Independent States) Army Forces.

From 1992 to 1995 he served as Deputy Minister of Defense of the Russian Federation. In 1994 the relationship between Boris Gromov and Minister of Defense Pavel Grachov deteriorated after Gromov’s public comments against the ill-considered engagement of troops in Chechnya, during an attempt to overthrow Dzhokhar Dudaev’s regime. Gromov also denounced the “barbaric choice of warfare means” that was used by the Russian army in Chechnya.

In December 1994 Boris Gromov resigned from his post as Deputy Minister of Defense; at first President Boris Yeltsin refused to accept his resignation, but after a few months he signed the document. In August 1995 Gromov was moved to the Ministry of Foreign Affairs as its main military expert. That same year Boris Gromov started his public political activity and was elected to the State Duma, the lower chamber of the Russian parliament.

While holding the post of governor, Boris Gromov was involved in several conflicts, widely discussed by the mass media. One of these incidents was connected to Aleksey Kuznetsov, who was involved in serious financial frauds. Since Kuznetsov was the Finance Minister of the Moscow Region, Boris Gromov was accused by the media of knowing about his subordinate’s operations and yet letting him leave the country.

Gromov was also criticized for his project concerning the building of a motorway between Moscow and Saint Petersburg, which included a plan to cut through a six-kilometer wide area of forest. Ecologists considered this massive deforestation unwarranted.

Boris Gromov was married twice. His first wife died in a plane crash. The widow of the pilot, who died in the same accident, became Gromov’s second wife. He has five children.