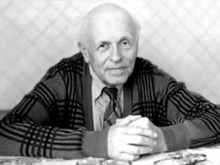 Sakharov’s life was full of paradoxes. A brilliant scientist, and awarded the Nobel Peace Prize. Constructor of the most powerful weapon ever, he was a confirmed pacifist and an opponent of the arms race.

After spending 16 years of his life on technical projects, he returned to fundamental physics and called his later scientific works his best. An atheist, he believed there must be a greater purpose, both in each individual life and in the very existence of humanity.

In a way, Sakharov fused into himself the legacy of his father, who was a physics teacher and author of a popular schoolbook, and his grandfather, a lawyer and human rights activist, who was calling for abolition of capital punishment - just like his grandson half a century later.

From childhood he possessed an inquisitive and well-organized mind, which captured complex ideas easily. An anecdotal account says that, during his study in Moscow University, he received a ‘C’ for his explanation of Einstein’s Theory of Relativity. Professor Igor Tamm, who conducted the exam, said the student “didn’t have a clue” about the material, but the following night Tamm called his fellow examiner to say, “Hey, it’s we who don’t have a clue and should get a C, not that student”. However much truth the story holds, Tamm became Sakharov’s teacher and later a colleague in the Soviet hydrogen bomb project. 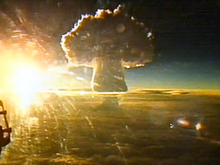 Sakharov is commonly dubbed “the father of H-bomb,” a title the scientist said was inaccurate since it undermined the contribution of his co-workers. Nevertheless his contribution was crucial for the success of the project. Sakharov conceived the design of the fist thermonuclear device tested in the country in 1953. For this work Sakharov was elected as a member of the Soviet Academy of Sciences, becoming the youngest academician of the time.

Later, the team independently developed a design similar to that used in the American nuclear weapons program, and proved that the hydrogen bomb had no principal limit to the yield of its blast. The research culminated in the 1961 test of the Tsar-bomb. This 50-megaton monster was detonated over the Novaya Zemlya archipelago in a political move. On Sakharov’s insistence, the initial yield was halved, but the resulting blast was still strong enough for the blast wave to circumnavigate the Earth three times.

In a spin-off project Sakharov created an explosively pumped flux compression generator, a device which uses chemical explosives to create a powerful pulse of magnetic field. Among other areas, the technology has its application in electro-magnetic pulse (EMP) weapons which damage electronic devices. Yet another military design by the scientist was a giant torpedo with a powerful nuclear warhead and a nuclear-powered engine, which Sakharov depicts in his memoirs. He says the idea was called “cannibalistic” by one Navy officer and was never pursued. 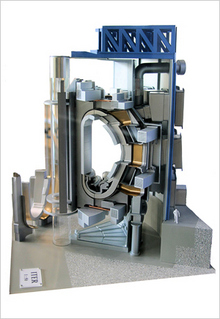 Together with Tamm, Sakharov worked on the peaceful application of nuclear fusion too. They conceived the ‘tokomak’, a device for confining high-temperature plasma using a powerful toroidal magnetic field. The design is being used in one of the biggest international scientific projects under construction now: the International Thermonuclear Experimental Reactor, or ITER. It’s hoped that it will give scientists enough data to develop the technology into a commercial source of power that neither needs expensive uranium fuel, nor produces radioactive waste.

Sakharov, in the Soviet Union, went the same way as American physicists involved in the Manhattan Project, who started public campaigning against their own creation. Like Albert Einstein, Hans Bethe and Harold Urey, Andrey Sakharov saw the approaching doom that nuclear weapons brought with them. He used his weight in scientific circles and the Soviet government to stand against the build-up of nuclear arsenals, and to raise concern of the environmental dangers of nuclear tests. His effort was behind Moscow’s agreement to the Partial Test Ban Treaty in 1963, which limited nuclear detonations to underground tests only. In the late 1960s, he campaigned for a ban of antiballistic missile defense systems, arguing they would give the Soviet and American governments a false sense of security, and raise the likelihood of a total nuclear war.

His position, as well as starting public discussion of highly political issues, made him fall out of favor with top officials. After his key essay “Reflections on Progress, Peaceful Co-existence, and Intellectual Freedom” was leaked out of the country and published in the West, he was banned from military research. Sakharov resorted to studies in fundamental science, and wrote several daring papers on the structure of the universe and the nature of gravity. 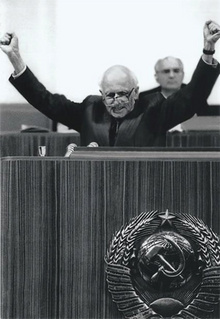 At the same time, he became more and more involved in public activities, campaigning against political persecution, the use of psychiatric institutions against dissidents, immigration restrictions and other violations of human rights by the Soviet authorities. He called for the convergence of socialist and capitalist systems based on universal respect for human life, unobstructed exchange of information, freedom of conscience and democracy. His vision of a “Universal Information System”, published in 1974, is accurate in many details of its description of the modern Internet.

Sakharov’s newfound passion was shared by his second wife Elena Bonner, whom he married in 1972. In response, a smear campaign against them both was launched in society. In 1975 he was awarded the Nobel Peace Prize, but was not allowed to leave the country, so Bonner traveled to Norway to collect it and deliver Sakharov’s Nobel speech on behalf of her husband.

The non-compromising position of the couple finally led to a devastating strike by the authorities. After Sakharov harshly objected to the Soviet invasion of Afghanistan, and called for an international boycott of the 1980 Olympic Games in Moscow, the Sakharovs were internally exiled to the city of Gorky - now Nizhny Novgorod - where no foreigners could travel. The scientist, who was one of only 16 people in all Soviet history to receive the highest state award for civil work the maximum three times, was further humiliated when he was stripped of all his decorations. Another blow for Sakharov was that his fellow dissidents with a position in the scientific world did nothing to protest his exile.

For six years, Sakharov was living in near-isolation in a wire-tapped apartment. Only after Gorbachev’s reform campaign was he allowed to return to Moscow and continue his public work. In late 1980s, he was a deputy in the new parliament, and prepared a draft of a new constitution. On December 14, 1989, his heart failed. A doctor who did the autopsy noted that Sakharov had an inherited cardiac defect, and had had little chance of making it to his 50th birthday. He died at the age of 69. 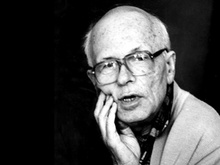 In one of his books, Sakharov described his life principle thus: “Life, with its casual relationships, is so complex that pragmatic criteria often become useless, leaving us only with moral ones.”