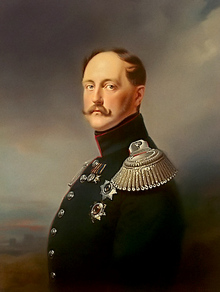 The path to power, marred by a bloody drama, was an arduous one for Nicholas I. But despite dreaming of order and stability at home, and military victories abroad, he is remembered as the most reactionary of Russia’s monarchs, a symbol of militancy and oppression.

Nicholas wasn’t brought up to be Emperor. Born on July 6, 1796, the third son of Czar Paul I, he had few chances of ever gaining the throne. Not seen as a possible heir, he was educated accordingly. His upbringing was strict, flogging was common and few efforts were made to motivate the young student.

Not taking much interest in the humanities, Nicholas was instead attracted by engineering and military affairs, especially enjoying the drills and lustre of parades. To complete his education, he embarked on several trips across Russia and also visited Britain. The travels broadened his horizons, but the young man was growing up a staunch conservative.

Nicholas led a quiet and unassuming life, perceived as being at the bottom of the royal family ladder. But things changed dramatically in 1819. His eldest brother, Czar Alexander I, was childless. Paul’s second son and next in line for succession, Constantine, renounced the throne. That left Nicholas an apparent heir. 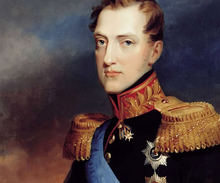 The news came as a shock. Nicholas didn’t feel ready to rule, realising he lacked the necessary skills and knowledge. Formally, his lifestyle didn’t change. He still wasn’t taking part in state affairs, while his military career remained sluggish. Unpopular among soldiers, he was disliked for his ruthlessness and fault-finding.

The sudden death of Alexander I, in November 1825 on a trip away from Moscow, plunged Russia’s monarchy into turmoil. The army swore allegiance to Constantine. Having no support, Nicholas was prepared to give up power but Constantine didn’t want to rule either.

The uncertainty lasted for more than 20 days. After much diplomatic tiptoeing, and rumours of a brewing plot in the military, Nicholas felt pushed to act and declared himself Emperor. He wrote: “The morning after tomorrow I’m either Czar or dead.”

But on the day the oath of allegiance to Nicholas was meant to take place, a group of young army officers – later known as Decembrists – attempted a coup. Nicholas was but a step away from his downfall, but he crushed the revolt, ordering the use of cannons to fire on the plotters.

While some of them were later executed, most were punished with Siberian exile. In an act of loyalty to their husbands, many of their wives followed them into the frozen wilderness. The expression “Decembrist wife” has since become a symbol of a Russian wife’s devotion to her husband. 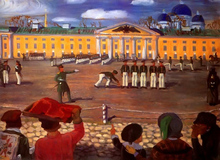 The "gendarme of Europe"

After the dramatic and bloody start to his rule, fighting revolutionary ideas and dissent became Nicholas’ obsession. At the beginning of the 1830s he brutally crushed a Polish rebellion, reducing Poland to the status of a Russian province. In 1848 he sent troops to suppress a Hungarian uprising against Austrian control. Russia became feared and hated by Western liberal thinkers, while Nicholas was dubbed the “gendarme of Europe”.

At home he tried to strengthen stability, streamlining Russia’s code of laws and its financial and education systems. Nicholas dreamt of an ideal society modelled on a patriarchal family, where the people show loyalty to the unlimited authority of the Czar. The motto of his regime was proclaimed to be “autocracy, Orthodoxy and nationality”. The principle was used to promote traditional Russian values and culture and suppress non-Russian nationalities and religions other than Orthodox Christianity.

The doctrine gave rise to two schools of thought. One, the Westernisers, believed that Russia remained backward and primitive and could progress only through adapting European ways and values. The other, the Slavophiles, enthusiastically favoured the Slavs and their culture, believing Russia should progress differently from Western Europe. 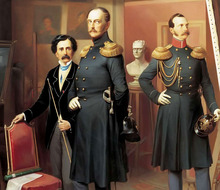 Deeply religious, hard-working and leading a simple lifestyle, Nicholas saw himself as accomplishing a divine mission and eagerly took part in every aspect of governing the country. But, true to his love of the army, he valued discipline and swift execution of orders far more than skills and knowledge.

Many civil institutions were reshaped according to military tradition. Bureaucracy flourished while Russia’s cultural and spiritual life was strictly controlled. Special secret police were set up and censorship tightened so much that it was dubbed “cast-iron”.

During Nicholas’ reign, arguably two of Russia’s greatest poets, Aleksandr Pushkin and Mikhail Lermontov, endured severe control and persecution for their free-thinking. The tragic deaths of both were seen by many, at least in part, as a result of the Czar’s hounding.

While Nicholas encouraged the development of technical education and engineering, he also tightened his grip on universities and limited the number of students allowed to study there.

Nicholas expanded Russia’s territory like never before, gaining control of the Far East and pushing the country’s borders towards the Pacific Rim. But his reign ended in a massive military disaster. His attempt to take on the Ottoman Empire and establish a protectorate over the Orthodox population of the Balkans, still largely under Ottoman control, led to the Crimean War of 1853-56.

It saw Russia suffer a bitter defeat at the hands of Britain, France and Turkey. The war showed that Russia’s backward economy was unable to compete with many Western powers. Nicholas was left severely shaken by huge military losses.

His health weakened and after catching a cold he died in 1855. There were rumours though that he poisoned himself after learning of one of Russia’s military defeats.

Although a complex personality, Nicholas has gone down in Russian history as a militant and reactionary. Aleksandr Pushkin described him as being “very much a soldier and a little bit Peter the Great ”. The Czar’s fondness for endless drills and flogging in the army earned him the nickname Nicholas Palkin, from the Russian palka or “stick”.