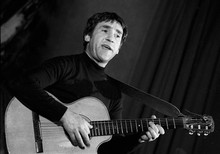 Vladimir Vysotsky was an actor whose performance of Hamlet was assessed as the world’s best embodiment of Shakespeare’s tortured hero. He was a songwriter who performed his own lyrics while playing a seven-string guitar. Millions of people across the Soviet Union - from factory workers to Communist Party secretaries, including then-Soviet leader Leonid Brezhnev, listened to his songs. However, only one official record was released in his lifetime: a collection of his verses called The Nerve was published only one year after his death. Many art critics called Vladimir Vysotsky “a prophet who is not honored by the authorities of his own country” – some of his songs were a very well-written satire on Soviet life with a little bit of political flavor.

Vladimir Vysotsky was born in Moscow to the family of an army colonel of Jewish descent and a translator of German extraction. His parents divorced shortly after his birth. When Nazi Germany invaded Russia in 1941, young Vladimir and his mother Nina were evacuated to the Urals. They returned to Moscow in 1945. It was a hard time for Nina, who had to work and study a lot to get back her fluency in German. So young Vladimir moved to his father Semyon’s family, with his Armenian stepmother whom he called Aunt Evgenia. He also followed his father on a two-year stay at a military base in Eberwalde in the Soviet-occupied section of Germany. 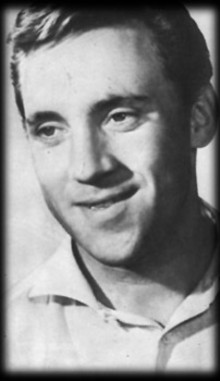 When Vladimir returned, he began to live with his mother again in an apartment block in Bolshoi Karetny Lane in the center of Moscow. He had an early interest in acting. Nevertheless, he chose to enter technical college, enrolling in the Moscow Institute of Civil Engineering in 1955. But his studies of physics and the construction sites did not last long. He dropped out of the institute after the first semester.

On stage and in frame

In 1956 Vladimir joined the School Studio at the Moscow Art Theater. He was thrilled by everything he was taught.  In 1959, a year before graduation, he became a company actor at Aleksandr Pushkin Drama Theater in Moscow, where he played minor roles.

He stayed in the theater after he graduated from Art School. A couple years later, he joined the Moscow Theater of Sketches. That was the time where he began to experiment with songwriting – at first these were the lyrics based on the Russia’s underground folklore known under the term blatnye pesni (delinquants’ songs).

Over the years he covered almost all the topics that interested him in his songs.

The beginning of the 1960s was the time when Khrushchev’s thaw was in full swing. Several new theater companies attempting to jazz up the old classics were emerging all over Moscow. One such “Moscow art hot spot” was the Moscow Theater of Drama and Comedy on Taganka Street in the center of Moscow.  In 1964, the new director of the company Yury Lyubimov invited Vysotsky, struck by the actor’s exceptional charisma. Later on Lyubimov would become both his mentor and friend. He would be the one to try Vysotsky out in his major productions as Hamlet and Don Juan.

Vysotsky’s Hamlet was special. It was a character dressed in modern tight black clothes who would entertain the audience before the show with his songs. Lyubimov’s idea was to show Hamlet as a person of strong individuality who is able to challenge authorities.

The Owner of the Taiga

In theatrical terms, Lyubimov's Hamlet was noteworthy for the cinematic motions inside the play – the curtain was moving all the time, which created the dynamic flow of the play. Vysotsky's Hamlet was a little disorderly and unofficial. Despite its somewhat rebellious character, Hamlet managed to run for nine years, from 1971 till Vysotsky’s death in 1980. Overall, there were 217 performances of the play.

At about the same time Vysotsky began to star in films, and most of the parts portrayed determined people, ready to steer through life’s uncertainties with unruffled equanimity – be it the lieutenant of the White Guard who fought the Red Army in the movie There Once Served Two Friends on the Front, the gold-digger in The Owner of the Taiga, the radio man of the mountaineering team in the 1968 movie The Vertical Line. His singing in the films was a very frequent occasion. All in all, he managed to star in 26 motion pictures. Some were directed by another friend and admirer of Vysotsky’s talent, Stanislav Govorukhin. 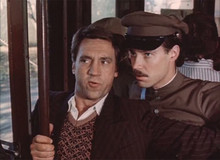 The Tryst is not Subject to Change

Vysotsky’s last role in motion pictures was special. It was Govorukhin’s 5-episode 1979 television thriller The Tryst is not Subject to Change. This is the story of how Moscow police eradicated one of the most dangerous criminal gangs in the 1940s. Vysotsky played the part of police Inspector Gleb Zheglov. Vladimir was rumored to have approached the Vainer brothers – authors of the book and the script for the film - saying, “That is my part.  No one will play Zheglov like I will.” He was very excited to work on the film – on many occasions he substituted for Stanislav Govorukhin and directed the episodes he considered important. When the film was being shown on the Soviet TV, police nationwide reported a decrease in the crime rate in large cities all over Russia – a true indicator the criminals were watching the movie too.

Songs about everything and everyone.

Vysotsky used to say, “I do not belong to what people call bards or minstrels or whatever.” All in all, he wrote more than 800 songs about anything one could imagine. During a concert for Russian émigré community in Toronto, Canada, he made a joke, “Well, if you want me to sing everything I’ve written, make a reserve of vodka which would be enough for two weeks – then we will hide in some remote place and I will sing them all.”

The poet accompanied himself on a Russian seven-string guitar. He used his fingers instead of a pick to pluck and strum, the tradition which was widespread among many Russian and Gypsy guitar players. Sometimes Vysotsky neglected the tuning of his guitar, which can be easily traced in his early works. He would often get upset when his friends tried to help him tune the instrument – he always believed it was up to him to do it. Vysotsky also had a unique singing style. He had an unusual habit of making consonants longer than vowels in his songs.

Vysotsky’s first choice of the so-called the outlaw songs – was a reflection of all the hardships people experienced right after the end of the WWII. They portrayed criminals, drunkards, hooligans and people with gulag experience. Nearly all of Vysotsky's criminal songs were first person narratives – a style he used later in the songs on other topics. He could easily imitate the accent and the speech of Moscow thugs of that time. 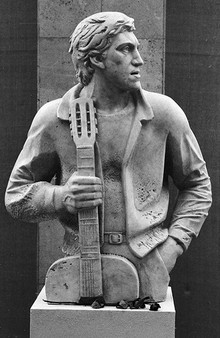 Very soon, Vysotsky distanced himself from this topic and began to write more serious songs. The topic he adored most of all was World War II. Vysotsky did not write his music just to glorify the USSR’s victory. He tried to build the narration as one of those who have been through this life-changing experience.

When many of the Soviet war veterans heard Vysotsky’s songs they were sure that that it could only be written by the man who had seen all the horrors of war. This proved the unique feature of Vysotsky’s talent. Before writing a song about a certain trade he would always do his best to learn more about it.

Aside from this, Vysotsky was exceptionally good at fairytales and love stories. His other strong suit was satire. When US chess player Bobby Fisher beat the Soviets and became world champion in 1972, Vysotsky wrote a two-song series with a recipe for the victory over “the American chess genius.” In 1979, he wrote a parody on the world’s current affairs in the form of a lecture given by a politically-aware prisoner to his fellow inmates.

All through the 1960s Vysotsky never managed to win a contract from the Soviet Melodia record company. But with the advent of portable tape-recorders his popularity turned out to be immense. His lyrics resonated with millions of Soviet people in every corner of the country; his songs were sung at house parties and amateur concerts. By the middle of 1970s the censors relaxed their tight grip on Vysotsky – he was allowed to make a recording on the Melodia, playing with a jazz band.

Struggling along the road of life

Vysotsky's first wife was Iza Zhukova, but their relationship lasted no more than a year. During one of the filming sessions in 1961 he met his second spouse, Lyudmila Abramova. Four years later they got married. They had two sons, Arkady and Nikita. The former is a journalist and an art critic, the latter is an actor.

But the love of his life was ahead. In 1967 Vysotsky fell in love with Marina Vladi, a French actor of Russian descent.

They got married in 1969. Thanks to this Vysotsky was able to tour around Europe. But most of the time they were apart. And in some songs Vysotsky tried to portray his solitude. Soviet officials did not welcome this relationship. The tension was eased when Marina sacrificed her ideals and, in an attempt to save the relationship, became a member of the French Communist party. That also saved Vysotsky from prosecution by the government.

In spite of his successful acting career, Vysotsky continued to make a living with his concert tours across the country, enjoying huge support of his friends. 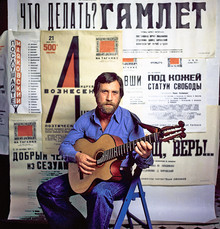 However, these get-togethers usually resulted in heavy drinking sessions – everybody was more than pleased to have a couple of shots with a nationwide celebrity. The schedules were always very tight, which fact even exacerbated Vysotsky’s drinking problem. Furthermore, he soon realized he needed more than alcohol to release tension and resorted to drugs; many of his songs by the end of the 1970s mention alcohol, insanity and various kinds of obsessions.

During one July night in 1980 he had a stroke. His friends and doctors did the best they could to save him. But Vladimir Vysotsky’s heart failed and he died on July 25, 1980. The only official statement about his death was published only in the Sovetskaya Kultura  newspaper belonging to the Ministry of Culture. All the other publications ignored his death – the 1980 Moscow Olympic Games were in full swing at that time and country’s authorities did not bother much about anything else.

But in spite of that, dozens of thousands of Muscovites came to say their farewell to the beloved poet, actor and singer. The funeral was held at Vagankovskoe Cemetery. The graveyard supervisor took no money for the service. He decided to bury him right at the entrance to the cemetery. Ever since, his grave has been covered with flowers - proof that the nation still loves one of its best contemporary poets.