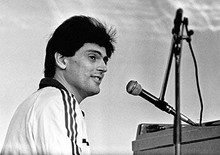 Viktor Reznikov was the first-ever Soviet pop composer to make the Billboard magazine charts in the early 1990s and stay there for 17 weeks – a long time, even by the bestselling musician’s. He also penned numerous hits for major Soviet pop stars of the time.

Growing up with soccer

Viktor Reznikov was born in Leningrad (now St. Petersburg) in 1952. His parents divorced when he was less than a year old. Viktor spent his childhood with his mother and his grandmother in an old block of apartments in the center of the city. The small backyard was where he learned to play soccer and ice hockey. He also became an expert at chess, basketball and gymnastics. He matched his love of sports with his love of violin: His mother began taking Viktor to music school at the age of 6. Reznikov relived his childhood memories in one of his first major hits – Dvorik (‘My backyard’).

I see in my dream

An old table in front of my backyard

With the old people sitting quietly around

And when the night falls

My yard is my nest

And I’m its pet

I’ll fly out of it soon

I’ll be apart – but not for long

I’ll come back to you, my backyard.

After graduating, Viktor entered a teachers’ training college in Leningrad. He dreamed of becoming an athlete, but eventually, his love of music won out. During his third year in college he began writing songs, especially with electronic instruments. One of his fellow students introduced him to computers – Reznikov would go on to become the first Soviet composer to use computer software for songwriting.

Viktor graduated from college in 1975. He worked at the school as physical training instructor for a few years, but never gave up on music. In 1978, Reznikov began to write tracks for singers from Leningrad touring Russia. Soon after that, the Leningrad concert company – Lenkontsert – asked Viktor to become its staff composer. Soviet pop star Alla Pugacheva heard one of Reznikov’s tunes, and immediately decided to record a new song. The optimistic tune ‘Uletai, tucha’ (Fly away, cloud) earned Viktor national recognition.

Many singers asked Viktor to write tunes for them after that. The songs were almost universally optimistic, filled with warm-hearted metaphors about love, and often featuring an unusual plot twist and a happy ending. It could be a story of how a computer fell in love with an intern named Katya, or a father who told stories about dinosaurs, of a skydiver confessing his lack of confidence. Reznikov’s songs started a career for Larisa Dolina, who later became one of the most popular female pop-singers, and Tynis Myagi, a singer from the Estonian capital of Tallinn. In the 1980s Reznikov made his first appearance as a singer in a quartet alongside prominent actor Mikhail Boyarsky and their eight-year-old sons in the song ‘Dinozavriki’ (Baby Dinosaurs).

‘How to become a star’

In 1985, Viktor wrote several tracks for the movie ‘How to become a star.’ The film told the story of pop and rock music, and was narrated by Maksim Leonidov, a rising star of Russian pop, and a parrot who supposedly witnessed the rise of pop music. Accompanying Reznikov’s tracks was concert footage from Louis Armstrong, Lisa Minnelli and The Beatles, while the old parrot explained what it was like to be a star.  Never before had Russian cinephiles seen a Soviet film featuring Western pop music.

In 1988, Reznikov composed a funny song about a poltergeist, a heated topic of discussion for the emerging Soviet tabloids of the mid-1980s. ‘Domovoy’ (the Bogie) told the story of a ghost becoming a part of the family.

The song was received warmly, but generally treated as a joke. It never became a big hit. But in 1989, Reznikov received a letter from New York promoter and nightclub owner Sam Albatello asking him to let his female trio The Cover girls perform the song. Viktor granted Albatello the rights. In 1991, The Cover Girls released the track ‘Don’t stop now’ over the original ‘Domovoy’ tune. The song stayed on Billboard magazine’s Top 5 chart for 17 weeks in a row, and was later picked by pop sensations like Rick Astley and Kylie Minogue. When Reznikov learned of this success he was stunned – no music critics had ever thought that a simple song like would climb so high on international pop charts.

Success did not change Viktor. Outside of his music career, he played in the StarKo soccer squad, composed of actors and singers. The team played with artists from other countries, and even toured the Soviet Union. The shows usually consisted of a game against a local professional team, followed by a concert. Viktor wanted to turn this project into an annual event.

On February 3, 1992, Viktor was driving his daughter Anya to his mother’s house. On the way, right next to his mother’s house, another car rammed into his at full speed. Anya was not hurt, but Viktor was very seriously injured in the accident. For ten days, the best doctors at St. Petersburg Military Medical Academy struggled to save his life. But on February 25, 1992, he died at the age of 39, having composed more than 100 songs over the course of his life.

Russia’s modern pop stars still sing Reznikov’s tunes. One of his most popular songs is called ‘Spasibo, rodnaya’ (‘Thank you, my darling’). It is a dedication to his Reznikov’s wife, Lyudmila. From 1992 to 2005, this tune saw several performers climb to the top of the Russian pop charts.