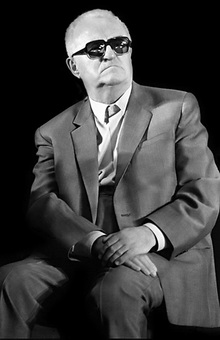 “I associate Sviridov's music man’s eternal search for the ideal. I have never heard the expression of evil in Sviridov's music, but only reflections of good. That is why his music is so popular. When presenting works by Sviridov abroad, I always witness their success. Georgy Sviridov’s music is regarded the world over as a reflection of the eternal Russia, which, in defiance of all cataclysms and metamorphoses, is the inner world of Russian character.”
- Vladimir Minin, a friend of Georgy Sviridov for over 40 years and the first interpreter of many of his works.

Georgy Sviridov was one of 20th century Russia's most important composers.

He will forever be remembered for his “Time, Forward!” which served as an inspiring theme song to the Soviet Union’s one and only news program for nearly three decades. It was this very tune that gave people the idea of time.


Svidirov was recognized as possessing rare and unique musical talents very early on in his career. At the age of 19 he was invited to join the Composers Union, a rare honor for such a young musician. At the age of 54 he was honored a People's Artist of the USSR.

From the beginning of his career up until the very end, Georgy Vasilyevich showed a preference for vocal music based on poetry. According to Aleksandr Belonenko, President of the Sviridov Foundation: “Sviridov was a knowledgeable man brilliantly well-versed in domestic and foreign poetry. Russian poetry was stored in his memory ready to be transformed into lines and tunes in moments of inspiration.”

The composer based his avant-garde themes on classical literature, Russian folk stories and poetry. He had his own way of interpreting the coryphaei of Russian poetry: Esenin, Mayakovsky, Blok, Nekrasov and Pasternak. His symphonies and chorales added significantly to the country's illustrious treasure trove of great music. He considerably renovated and transformed the traditional vocal and vocalic symphony genres: oratorio, cantata and lyric. Widely-known are his vocalic symphonies “Pushkin's Wreath,” “Pathetic Oratorio,” “Snowfall” and “Songs of Kursk.” His music enjoyed exceptional success both among the public and his peers. Without exaggeration he could be called not only one of the most famous composers in Russia, but also one of the most loved and popular.

Georgy (Yury) Vasilievich Sviridov was born in the town of Fatezh in Kursk Province into the family of postal employee. His mother was a teacher. When Georgy was four years old his father died in the Civil War and Yuri and his mother moved to Kursk. Yury went to school there and soon showed his musical talent. His first musical instrument was the balalaika. He learned to play by ear, demonstrating such talent and ability that he was accepted into the local orchestra of Russian folk instruments. He entered music school and received his primary music education in Kursk (1929 - 1932). During the entrance exam he was to play piano. He did not have any repertoire at the time, so he decided to play his own composition. It impressed the judges and Georgy was accepted to school. 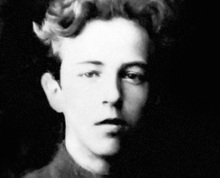 From 1932 to 1936 he studied at the Leningrad Central Music Technical School, first as a pianist with professor Isay Braudo (a famous pianist, leading organist player and teacher) from 1933 and later as a composer with Mikhail Yudin (a famous composer and musician). These were financially difficult years for Yuri and to make ends meet he took work playing piano in restaurants and cinemas.

Today Georgy Sviridov accounts for one of the most successful expressions of Pushkin's poetry in Russian 20th-century music. By the way, his first creative achievement was lyrics based on Pushkin's verses. Today they are viewed as vocal classics belonging to the repertoire of many outstanding singers. And in 1935 Sviridov composed a cycle of lyrical romances based on the poetry of Pushkin which brought him first critical acclaim. Years later Sviridov, already a well-known composer, turned to Pushkin again and wrote a work that became a noticeable event in his country's musical life - the choral cycle “Pushkin's Wreath” (1979).

“To me Pushkin sounds as the realization of the high predestination of man. Each epoch interprets him in its own way. Averse to idealizing the Pushkin era, I do not want to give him a modern interpretation either. I simply try to follow him into his unattainable heights as best I can,” Sviridov wrote.

The ten parts of the “Pushkin's Wreath” cycle reflect many facets of the poet's art: lyrical, epical, folk. The composer turned to verses written in different times, to different themes, to different moods: their interpretation in music reflected the spirit of Pushkin's poetry to perfection. “Pushkin's Wreath” gained the Russian public's love and appreciation among the lovers of music abroad.
During his studies in Leningrad Conservatory, 1936 – 1941, Sviridov also experimented with different genres and different types of musical composition. He completed Piano Concerto No. 1 (1936 – 1939), Symphony No. 1 and the Chamber Symphony for Strings (1940). Later Sviridov would turn to the rich Russian musical heritage, including the folk songs, for inspiration.

Sviridov worked in various genres. Besides vocal cycles to the words by writer Blok (1938), poet Lermontov (1938), the composer wrote two symphonies for Symphonic Orchestra, and the Symphony for string orchestra in four parts, two piano concertos, the piano quintet and trio, two string quartets, two sonatas and two partitas for the piano, the piano album for children and many other plays. He tried himself in the genre of operetta. In the early 1940's Sviridov also began a fruitful work in the genre of scores for theater and cinema.

From 1936 to 1941 Sviridov studied in Leningrad State Conservatory on the composition class with Pyotr Ryazanov (Russian composer, teacher, and musicologist) and Dmitri Shostakovich (a famous Soviet composer). Sviridov was a favorite pupil of Shostakovich, who regarded him as a genius and told him this personally. In the 1940s he was a composer of neo-classical school, close to his teacher Dmitri Shostakovich and greatly influenced by him.

Sviridov was mobilized into the Soviet armed forces in 1941, just days after his graduation from the conservatory. The young composer was sent to a military academy in Ufa, but was discharged by the end of the year due to poor health.

Till 1944 Sviridov stayed in the city of Novosibirsk, as Leningrad Philharmonic was evacuated there during the World War II. During this period of time he wrote many war songs, one of the most loved was “The song of Brave”, written by Aleksey Surkov in 1941.

The Motherland calls the braves
To fight against the Fascists' gang.
A bullet “is afraid” of a brave,
A bayonet can't hit a brave.

Besides, Sviridov worked on music for theatre performances. Many theatres were evacuated to Novosibirsk as well.
In 1944 the composer returned to Leningrad. In 1956 Sviridov moved to Moscow, where he continued to create his masterpieces. In the 1950-s Sviridov created his famous vocal cycles “Songs to the words from Robert Burns” (1955).
His heyday as a master fell on the mid50s after the premiere of “The Poem in Memory of Sergey Esenin”.

“The Poem in Memory of Sergey Esenin” is a work by mature Sviridov, with its own musical language and Russian flavor, which immediately struck both the music lovers and professional musicians. Dmitri Shostakovich noticed that – “few notes, a lot of music”, and so did Igor Stravinsky as he listened to the piece in Petersburg in 1962”. Aleksandr Belonenko. 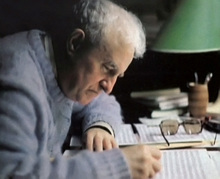 Sviridov was one of the first to set the poems of Boris Pasternak to music, moreover at a time when Pasternak's poetry was under suspicion, after the Nobel Prize scandal. The cantata “It is snowing” (1965) to poems of Pasternak, is one of the finest and most inspired of his works.

In 1995 his 80th jubilee was marked by the whole country. On his birthday Dmitry Hvorostovsky (famous Russian opera singer) and Mikhail Arkadiev (conductor, pianist, and musicologist) performed three vocal cycles to words by Pushkin, Esenin and Blok.

“This is a Russian genius who has yet to see really high acclaim. His legacy will add considerably to the forthcoming revival of Russian culture”, - Academician Dmitry Likhachev wrote about Sviridov. 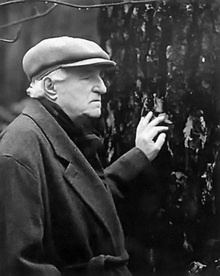 In the last years of his life, the composer worked at the composition “Iz Liturgicheskoy Poezii” (“From Liturgical Poetry”), which included the choruses without accompaniment, the parts written for soloists, chorus and orchestra. Part of this work – “Pesnopeniya I Molitvy” (“The chants and prayers”) for mixed, male, female and children's choirs - was actually completed by the composer and published after his death. This work received a high public appraisal and was awarded the State Prize of Russia in 1996.

Patriarch of Moscow and All Russia Aleksey II said in his high priest speech: “Representing a collection of choral cycles by the composer - it reflects the particular and the most significant facet of inner life of this great national master - his interior spiritual life which is related to Russian Orthodox tradition”.

The last chorus “With hope looking in heavens” was written on Vladimir Kostrov’s (Russian poet) verses in the day of Sviridov’s death. It became a kind of Sviridov’s “Requiem”.

Over his career, Sviridov was distinguished with numerous prestigious awards including the State Prize of the USSR in 1946, 1968, and 1980, the Lenin Prize (1960), and the People's Artist to the USSR (1970). At one point, he was also honored with Russia's highest tribute for artists when he was named an honorary citizen of Moscow.

Georgy Sviridov's career path took more than six decades. He addressed a whole myriad of genres - chamber, symphony, oratorio, choir, film music and romance. And in each of the genres he created masterpieces. The starting point in writing a piece was a poetic line, the highly artistic expression, which makes Sviridov a true artist.

Sviridov glorified Russia as no one before him. He sang of Russia as a whole and of separate corners of it so dear to everyone. Love-saturated works by Georgy Sviridov evoke a hearty response from the public. Music for the few which became music for all is what made Sviridov's ideal.

The composer died of a heart attack in Moscow.