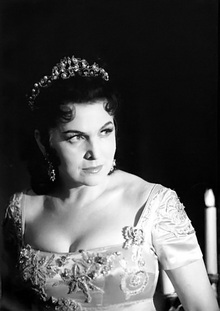 She is the beacon of modern classical music and the diva of international opera. Her exquisite soprano has impressed audiences all over the world. Galina Vishnevskaya has suffered the hardships of exile and reaped the delights of international success. Her path towards a multitude of awards, a collection of the most prestigious operatic roles and personal happiness was peppered with a multitude of difficulties. It began when she was abandoned by her mother, who sought new romantic conquests, and was left in the care of her drunkard father, who was not overly concerned about he welfare of his young daughter.

Vishnevskaya was brought up by her grandmother in the city of Kronstadt, not far from St. Petersburg (then Leningrad). They lived in a large communal flat, surrounded by relatives and constant buzzing activity. Her singing talent was noticed early; as a little girl, Vishnevskaya liked to impersonate popular Soviet singers, climbing up on a chair to perform during family gatherings. At the age of 10, she received some opera recordings as a present. The gift would change her life forever.

Vishnevskaya was overwhelmed by the unmatched nature of operatic singing and immediately decided to become like one of the voices she heard on the gramophone. She was naturally endowed with an amazing memory when it came to music. As a child, she would sometimes run off to the river shore to practice songs she had heard on the radio.

Vishnevskaya was 16 when the horrors of World War II enveloped her and her family. During the 900-day siege of Leningrad, when the city was surrounded by Nazi troops, her grandmother died of 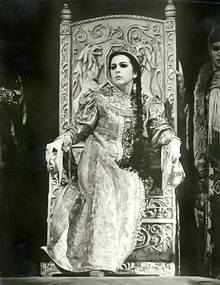 starvation. It was during that difficult time that she met her first husband - a marine officer. They married quickly, but their relationship fell apart just as swiftly as it had begun. However, this turn of events helped her survive the war - she was taken to the local air defense unit where people received extra rations for their work.

In 1944, Vishnevskaya made her stage debut by performing in a local operetta theater. The ensemble traveled all over the Soviet Union, performing at military garrisons, villages and communal farms. In her autobiography, she vividly remembers the images of those days: "We slept in piles, wherever we could and we would perform every day in chilly concert halls with snow on the walls." Nevertheless, she was glad to finally be a part of the world she longed for - the world of music.

Her music teacher, Vera Garnia, an 80 year old woman who gave lessons for the miserly price of one ruble per hour, opened up her soprano talent and predicted a dazzling opera career for her student. However, the young singer continued to lead a nomadic existence. She became involved in another unsuccessful relationship, this time with the ensemble's manager (who was 22 years her elder). In 1945, Vishnevskaya gave birth to a son, who died two months later from food poisoning. Shortly after that, the young singer contracted tuberculosis - a result of the meager lifestyle she led.

While recovering from her illness, Vishnevskaya was walking one day along the shore of the Neva River in Leningrad when she saw a poster advertising auditions for opera internships at the Bolshoi Theater. She had nothing to lose. To her surprise, she made it through to the second

round and was accepted into the theater's ensemble. Her natural beauty, talent and acquired professionalism played their part - she was the only one to be offered the position out of the thousands who auditioned all over the Soviet Union.

Later, the Bolshoi Theater director wrote in his memoirs:

"She just suddenly appeared in the Bolshoi Theater. Out of nowhere, absolutely unknown, but already well equipped, and a professional in her own right!

The ensemble gladly accepted her: she was immediately offered a most difficult part in "Fidelio" - the only opera written by Beethoven – in which she played Leonore. What followed was imminent success. Vishnevskaya was very selective of her roles. She didn’t want to perform in meaningless operas created by some Soviet composer on order of the Communist Party.

Vishnevskaya was not keen on winning medals and awards to please the Communist Party. As 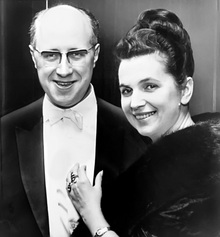 she claims in her autobiography, she was determined “to become a great artist like Fyodor Shalyapin” and the ephemeral glow of medals couldn’t seduce her into wasting her talent on short-lived performances. Indeed, her repertoire has always consisted of classical operas - from “Aida” to “Eugene Onegin.”

In 1955, Vishnevskaya traveled to Prague to take part in an arts festival for students and youth. It was there that she met the famous viola player Mstislav Rostropovich. Vishnevskaya recalls:

"I awaited a love, for which it would be worth dying, like my opera heroines. We rushed towards each other and nothing could possibly hold us back."

In 1959 Vishnevskaya made her debut performance in the U.S. She performed Tatyana in “Eugene Onegin” by Tchaikovsky at Carnegie Hall and brought the audience to rapture. Tickets for her next solo concerts sold out immediately. She excelled on the world’s major opera stages, making her Metropolitan Opera debut in 1961 as Aida and sang at La Scala in 1964. It was a golden time in the singer's career. In 1966 she received the "People's Artist of the USSR" order.

Vishnevskaya and Rostropovich were good friends with Russian writer Alexandr Solzhenitsyn, who was struggling with opposition from Soviet authorities. For four years, the couple gave him refuge 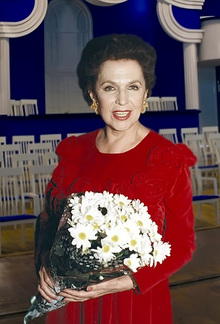 in their country house, which made them tacit enemies of the state by default. Pressure from the government was soon to follow: Rostropovich was prohibited from touring abroad and was expelled from the Bolshoi Theater. Vishnevskaya’s performances received no coverage in the Soviet press and TV and radio stations were banned from broadcasting her concerts.

In 1974, unable to deal with the pressures of their homeland's ideology, the couple left the USSR to settle first in the U.S. and, eventually, Paris. In 1978, the USSR proclaimed them "ideological renegades" and stripped them of their Soviet citizenship. They weren't permitted to regain their nationality - or return to the country - until 1990. However, Vishnevskaya's career continued in full swing. She bid farewell to the opera stage only in 1982, at the age of 57, in one of her favorite roles - Tatyana in “Eugene Onegin.”

To this day, the unstoppable soprano continues to be an enormous presence on the world's cultural and social scene. In 2007, despite losing her husband that same year, she starred in Aleksandr Sokurov’s movie “Aleksandra.” She played the role of a grandmother who comes to see her grandson during the Second Chechen War. Despite her age, she endured the tough shooting conditions. The film received massive critical acclaim and was nominated for the Golden Palm award in Cannes in 2007.

Galina Vishnevskaya currently lives in Moscow. Her two daughters - Elena and Aleksandra - live in France and the U.S. respectively. She has six grandchildren, all of whom are U.S. citizens.