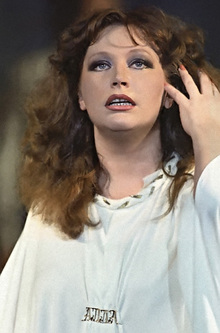 
Her parents tried to give her best musical education possible. Alla Pugacheva started performing on stage when she still was at junior school. In 1965 she composed and recorded The Robot, her first song for the national radio.

After high school Pugacheva continued education in Moscow State Music College, the department of conducting and choir singing. Later, in 1981 she also got a degree in theatre directing at the State Theatre Art College.

The woman who sings


Alla Pugacheva started professional singing career in the early 1970s, and was a singer with the leading Soviet bands, but really big success came to her when she won the Grand Prix of the Golden Orpheus song contest with the song Harlequin in 1975. It was followed by several more hit songs, and Pugacheva's status of the Soviet super star was then unquestionable.

In 1977 she stars in a film titled A Woman Who Sings, a story of a young singer who becomes a super star. Many of the Soviet people believed it was an Alla Pugacheva's biopic. Next year Primadonna, as she was nicknamed in Russia since then, won the Grand Prixes of two more prestigious in Eastern Europe pop-song festivals with her hit Kings Can Do Anything. Soon after that she started her tremendously successful solo career at home and even made a humble attempt to conquer Western European audience. 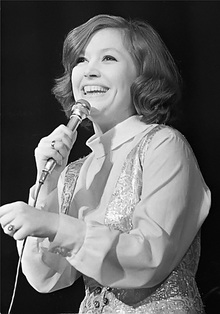 Alla Pugacheva's performing, recording and especially festival career in the West was not at all shiny. Sweden was the only country outside Eastern Europe where she made a noticeable appearance. Her participation in Eurovision song contest in 1997 turned a total failure and a huge blow to her self esteem. Many critics were totally puzzled and shocked by her decision to share the competition venue with young singers. Somehow it made the festival itself widely known to Russian public who still consider Eurovision the most significant musical event of the year.


The patron saint of Russian singers


With all the ups and downs, Alla Pugacheva's talents and ambitions have always been much wider that merely singing. Very early in her career she proved to be a gifted song composer as well as a strong variety show director. Her position in Soviet and then Russian show business became clad solid when she took to producing her own and later other performers' shows and recordings.

She gave a jump start to many singing careers including the ones of her daughter Christina Orbakaite, her former son in law Vladimir Presnyakov Jr. and her former husband Philip Kirkorov. There was a period of time when the Primadonna's smile or frown could instantly change professional fate of a singer or a song writer in domestic pop scene. 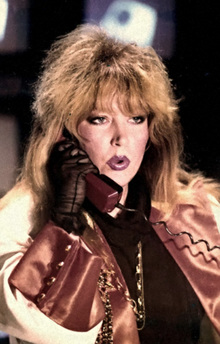 Alla Pugacheva's business endeavors outside variety stage happened to be less impressive. She tried to launch a number of product lines from perfume and shoes to potato chips giving her name to all of them. Unfortunately to Alla Pugacheva and her business partners, the pop star's fans made a clear choice in favor of listening to Alla rather than wearing or crunching her.


Pugacheva's latest business venture seems so far more successful. It is a new FM radio station, and its name is – of course! – Radio Alla.


Alla Pugacheva remains the most successful and one of the most highly paid singers in the short history of Russian pop music. However her private and social life of the late years create more media response than her stage performances.

Alla Pugacheva's divorce with Kirkorov (recently Russia's number one male pop singer) in 2005 was as widely publicized as her marriage to him in 1994 when he was half her age. Ill wishers say it has been an end of a long lasting business and PR project, and remind that she still keeps the rights to ex-husband's name and career.


Close friends of Alla refute this by saying that her friendships and affections have always been genuine, and if she now prefers the company of another younger man, stand-up comedian and TV star Maksim Galkin, that is because she fancies him and not for the sake of free publicity.


Alla Pugacheva is still one the most influential persons in Russian cultural and social life. 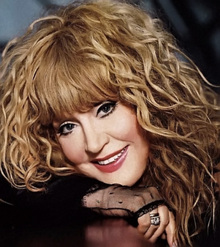 She is a member of Public Chamber and advisor to president of Russian Federation. She was awarded a number of high state awards and honors.