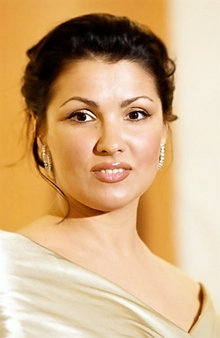 Anna Yuryevna Netrebko is a Russian soprano opera singer, and a People’s Artist of Russia.

She was born in Krasnodar on the Kuban River in Southern Russia into a geologist’s family. According to her father, she started singing in kindergarten. While in school, she was the lead singer of the “Kuban Pioneers” ensemble. She was also a capable athlete and now holds the title of master of sports in acrobatics and sport categories in athletics. When she was 17, she won second prize and the people’s choice award in the Miss Kuban Beauty Contest. In 1990 she entered the vocal faculty of the Rimsky-Korsakov Leningrad Conservatory. While in the conservatory she worked as a cleaner at the Mariinskiy Theater.

In 1993 Netrebko won in a nationwide vocalist contest and was invited to the Mariinskiy Theater, where she sang in a wide repertoire. According to her official biography, in 1994, while still a student in her fourth year, she debuted in the Mariinskiy Theatre’s production of “Figaro’s Marriage.” According to Radio Svoboda, she never graduated from the conservatory.

In 1995 Netrebko started singing abroad. As part of the Mariinskiy Theater troupe, she toured Finland, Germany, France, Israel, the Netherlands, Italy, Japan, Turkey and the US. She debuted at the Metropolitan Opera in the United States as Natasha Rostova in “War and Peace” (“Voyna i Mir”). Critics say it was one of Netrebko’s best roles. She later reprised the role at the Mariinskiy Theater in St. Petersburg, at Madrid’s Real Theater, at Milan’s La Scala, London’s Covent Garden and at the Easter Festival in Moscow. In an interview to The Observer newspaper in 2007 the singer said she chose Western music because “she had no voice for Russian music.” Despite the packed touring schedule, she remained the lead singer of the Mariinskiy Theater. She performed together with the world’s best-known conductors, including Valery Gergiev, James Levine, Seiji Ozawa, Nikolaus Harnoncourt, Zubin Mehta, Colin Davis and Claudio Abbado. She was repeatedly invited abroad for solo performances and operas.

Wide acclaim came to her after the roles of Pamina in “The Magic Flute” and Rosina in “The Barber of Seville.” She became a wide-known singer of Russian opera roles, including Lyudmila in “Ruslan and Lyudmila,” Louisa in “Betrothal in a Monastery” (“Obruchenie v monastyre”) and Marfa in “The Tsar’s Bride” (“Tsarskaya Nevesta”). She also sang in the uncharacteristic style of bel canto in the romantic roles of Gilda in “Rigoletto,” Musetta in “The Boheme” and Juliette in “Montecchi and Capuletti.”

In 2003 at the Los Angeles Opera she sang the part of Lucia di Lammermoor in Donzinetti’s opera of the same name. In February 2004 she sang at the Vienna Opera Ball. In 2007 she debuted at Carnegie Hall, where she sang together with the famous Russian opera singer Dmitry Hvorostovsky. 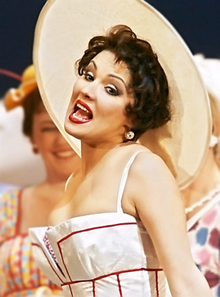 Netrebko received numerous awards at international opera singers’ contests. In 1996 she won the Second International Rimsky-Korsakov young opera singers contest, in 1998 won the highest theater prize Casta Diva and in 1999 she won St. Petersburg’s highest theater prize “The Golden Light” (“Zolotoy Sofit”). In 2003 she won the Salzburg musical festival. That, and the release of her first album under the Deutsche Grammophon label, made her popular among the Germans and Austrians, who named her “person of the year.” In October 2005 she received two prestigious German Echo prizes in classical music in the “Singer of the year” and “Album of the year” categories. In July 2006, the Austrian government awarded her citizenship “for special merits.” After that, she began living in Vienna.

In 2005 Netrebko received the Russian Federation State Prize in Science, Technology, Art and Culture. A year later she recorded the “Russian Album” under Deutsche Grammophon together with Valery Gergiev. It was nominated for a Grammy Award and though it failed to win, critics named it the best album of Netrebko’s career. She recorded her fourth album “Duets” together with Rolando Villazon in 2007 after the triumph of the “La Traviata” and the singers’ successful tour.

In May 2007 Netrebko entered Time magazine’s list of the world’s 100 most influential people, and in November, Musical America named her “Musician of the Year.” A year later she became a People’s Artiste of Russia.

Currently, Anna Netrebko lives in Vienna, but she also owns apartments in St. Petersburg and New York. She is married to the Uruguayan baritone Erwin Schrott. They have a son, named Tiago Aruã Schrott, who was born on 5 September 2008.

Anna Netrebko says she loves to read Boris Akunin’s books and shopping. Movies are another of her passions and she even played a secondary part in “The Princess Diaries” movie.