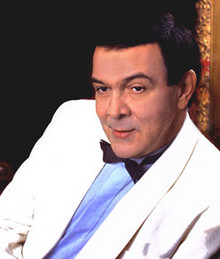 Muslim Magomayev was an Azerbaijan-born baritone who attracted millions of listeners in the Soviet Union and Europe as an opera and pop star in the 1960s and 1970s.

Magomayev was also known as a composer, writing several film soundtracks. In addition, Magomayev acted in films and hosted television and radio broadcasts devoted to prominent musicians of the 20th century. He was as proud of his native Azerbaijan as he was of Russia, and would say that Russia was his mother, Azerbaijan his father and that he was a bit of each. Magomayev was mischievous, conscious of his own magnetism and always smart.

Muslim Magomayev represented one of the most respected artistic dynasties in Azerbaijan. His grandfather, also Muslim Magomayev (1885-1937), was one of the founders of Azerbaijani-composed music. Magomayev's father, Mahammad Magomayev, who died during World War II two days before peace was declared, was a very talented scene designer and painter, and his mother Aishet Magomaeva was an actress.

At the age of three Muslim could play melodies by ear and at the age of five he composed his first melody and remembered it for the rest of his life. Many years passed before this melody became a song by the composer, Nightingale Garden. Muslim began to take vocal lessons at the age of 14. He was a good pianist and, in addition to vocal coaches, trained himself to sing by locking himself in his room and listening to recordings by Italian opera star Enrico Caruso. Muslim finished the 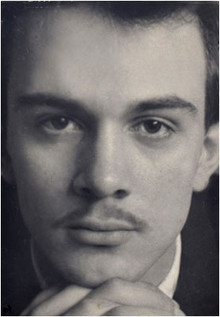 piano and composition class of the musical school at Baku Conservatory and later he graduated from the vocal class of the Baku Conservatory. As a teenager he became interested in Italian songs, American jazz and other styles of popular music. He was 19 when he first performed, at an international youth music festival in Helsinki, the Finnish capital.

In 1962, at the age of 20, Magomayev first appeared in Moscow, where he performed within the frameworks of the Days of Azerbaijani culture. His breakthrough performance followed in the spring of 1963, made national headlines when he delivered renditions of arias from Gounod's Faust and the song Do the Russians Want War? He sang these two musical pieces in a gala-concert and became an overnight celebrity. Next day after the event the press wrote, “Greatest success, one can say, a unique success of Muslim Magomayev. His brilliant talent, magnificent vocal technique yells us that a very talented young singer appeared on the opera stage.”

Those who remember his earliest performances in Moscow say that he was more than a singer - he was an event, from the moment he took to the stage. A year later he gave his first solo concert in the Moscow Tchaikovsky Concert Hall to a full house and became a soloist of the Azerbaijan State Academic Opera and Ballet Theater.

Muslim earned fame in the USSR as an opera singer with Rossini's Barber of Seville. He also became known for his arias from Puccini's Tosca, Hajibeyov's Koroghlu and Shah Ismayil, which was composed by his grandfather. “I heard his early Italian opera recordings - it was something extraordinary! His voice was unique,” said Nikolay Petrov, a prominent Russian pianist. 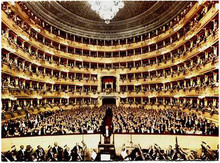 As his star ascended, Magomayev traveled to Milan, Italy, in 1964-1965 to train at the famed opera house La Scala, followed by a stint at Paris's Olympia Theater. In 1966 and 1969, Magomayev performed in the Olympia with great success. The director of Olympia, Bruno Coquatrix, offered him a contract and Magomayev was seriously considering the opportunity to pursue international career. However, Ekaterina Furtseva, then-Minister of Culture, refused to grant permission, claiming that Magomayev was needed to perform at governmental concerts.

After returning to Baku, Magomayev graduated from the conservatory. His piano technique was so impressive at the graduation exam that professors said, “We have a feeling that we are having a piano exam, not the vocal one.” Many people who had become People’s artist of the Azerbaijani Soviet Socialistic Republic attended Muslim Magomayev’s final exam. Windows and doors had to be open in order to allow people to listen to their idol in the streets. He performed pieces by Handel, Stradella, Mozart, Schumann, Grieg, Verdi, Tchaikovsky and Rachmaninov in his final exam. 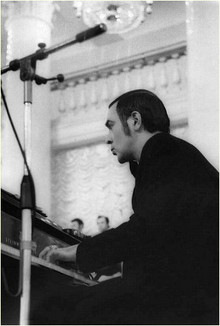 Shortly thereafter, Muslim Magomayev received a Gold Disc Award in Cannes at the International Festival of Recording and Music Publications (MIDEM) for fantastic album sales of over 4.5 million units, ahead the Beatles, Adriano Celentano, Salvatore Adamo and Tom Jones. Muslim managed two of these discs, the second coming at MIDEM in 1970.

His travels abroad furthered his skills within the operatic canon, but the singer remained steadfast in his passion for popular music, proving an uncommonly sensitive interpreter of Soviet anthems like Shiroka Strana Moya Rodnaya (My broad motherland) - a signature of his performances throughout his career. He also turned down the invitation to sing in Moscow’s Bolshoi Theater. Instead the singer turned to popular music, becoming a pop idol for several generations of music lovers in the Soviet Union.

Muslim Magomayev was often compared to Ives Montan and Frank Sinatra. His popularity in the USSR was overwhelming. He would give three concerts a day, filling huge arenas all across the Soviet Union, while his albums sold millions.

The city of Sopot hosted IX International Festival of Pop Songs in 1969. Magomayev won again. Despite the traditions of the Sopot Festival, Muslim Magomayev became the second singer in the history of the Contest to win twice.

The famous singer was lucky to work with the greatest performers on the opera stage. He sang with Maria Biesu in Tosca and Galina Kovaleva, Prima Donna of the Kirov Theater, in Barber of Seville. Muslim Magomayev was the first among the Soviet pop singers who went to the USA on a concert tour. He toured through the US largest cities: New York, Chicago, San Francisco, and Los Angeles.

Magomayev developed a broad repertoire that encompassed more than 600 songs. He founded the Azerbaijan State Variety Symphony Orchestra in 1973. He remained its art director until 1989. While the singer continued to give solo performances, the orchestra earned the majority of his attention during the latter half of his career. In 1973, at the very young age of 31, Muslim was awarded the Soviet Union's highest artistic title: People's Artist of the USSR.

Magomayev moved to Moscow in the early 1970s. He met his second wife and frequent duet collaborator Tamara Sinyavskaya in the Baku Philharmonic, and they married in 1974. His wife is a prominent Russian opera singer who was also awarded People's Artist of the USSR and worked as a soloist at the Bolshoi Theater. Magomayev’s first married when he was 19 and it didn’t last long, in part because of his demanding work schedule. However he had a daughter from that union.

In 1998, Magomayev largely retired from singing and wrote a memoir, Melody, My Love.

Magomayev believed that every gifted person should know when to stop. And as soon as he felt his career was over, he left the stage without performing in any farewell concerts, dedicating himself to painting. But his unforgettable voice and diverse repertoire will always remind us of his gifted personality.

Upon the discovery of a serious heart condition, Magomayev largely withdrew from the public eye, insisting he wanted audiences to remember him in his prime, although he continued recording new material. He died after a long illness in Moscow. Muslim Magomayev was buried in the Alley of Honors in his native city of Baku, next to his grandfather.