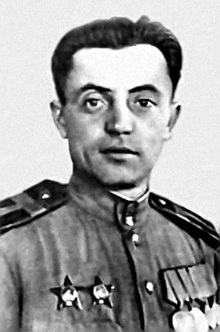 Yakov Pavlov is one of the greatest heroes of the Battle of Stalingrad. The battle is considered by many as the turning point in WWII.

Pavlov was among the defenders of what is now known as “Pavlov’s House.” The defense of the four-story building lasted for 58 days and became one of the symbols of the desperate Soviet resistance against the Nazis.

As for Pavlov, he was all but canonized by Soviet propaganda. Although the documents that were disclosed after the collapse of the Soviet Union prove that Pavlov didn’t play quite the role that was ascribed to him. The true story, however, does not diminish the courage or endurance of Soviet soldier.

Yakov Pavlov was born in the village of Krestovaya in the Novgorod region. His birth and his childhood coincided with the turbulent years of the Russian Revolution. After finishing middle school, Pavlov stayed in his village to work in farming until he joined the army in 1938.

WWII brought him to Ukraine, where he took part in the first loosing battles of the Soviet Army that retreated to the east under the German push.

In July 1942 Pavlov arrived in Stalingrad after being transferred to the 13th guard division of General Aleksandr Rodimtsev, one of the most celebrated commanders of the subsequent battle. At that time, Pavlov led the machinegun squad and spent most of August in training not far from the city. When his division reentered Stalingrad in September, the enemy was already in the city.

On 27 September 1942 Pavlov received orders to determine the enemy’s position in the four-story building situated on January 9 Square. The house had an advantageous strategic position and was occupied by the Germans.

The four-man scouting party led by Sergeant Yakov Pavlov managed to drive the enemy out and held their position until reinforcements arrived. The defense lasted for 58 days. Soviet propaganda claimed Pavlov was the one in charge of the house’s defense with only 24 soldiers under him. Indeed Pavlov was in command - for at least one day. But as soon as the reinforcement units reached the building, Lieutenant Ivan Aphanasiev took command. The actual number of the defenders varies in different sources from 28 to 100 at certain moments of the standoff. Pavlov was wounded on 25 November 1942 during a German counterattack. After a stay in hospital, he re-joined the army and toured as far as the Baltic Sea.

After the war Pavlov returned to his home region of Novgorod. He graduated from the School of the Communist Party and quickly climbed the career ladder. Pavlov was elected Deputy to the Communist Party Supreme Council of Nizhny Novgorod three times. He was decorated with a red star (Hero of Soviet Union), the highest honor for a Soviet soldier, and also received the Order of Lenin and other state honors.

Yakov Pavlov died on 28 September 1981. He was buried in Nizhny Novgorod. There are some accounts that mistakenly claim that Pavlov became a monk such as Anthony Beevor’s “Stalingrad: The Faithful Siege.” He is in fact confused with Ivan Pavlov, another Soviet soldier who took part in the Battle of Stalingrad, who entered the ministry in the eighties.