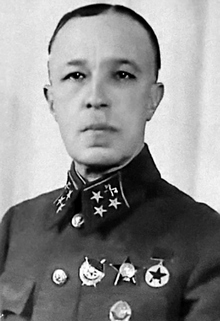 Dmitry Mikhailovich Karbyshev was a Hero of the USSR, Lieutenant General of Engineer Troops, a professor of the General Staff Military Academy and a Doctor of Military Science.

Karbyshev was born in Omsk in Southwest Siberia, into the family of a military official. His father died when he was twelve. In spite of grave financial problems, Karbyshev did brilliantly in the Siberian cadet corps and in 1898 was accepted into the St. Petersburg Nikolaevskoe School of Military Engineering, from which he graduated at the top of his class in 1890. After that he was assigned to military service in the Russian Far East. With a rank of second lieutenant, he was appointed company commander of the East Siberian Sapper Battalion, which was stationed in Manchuria (a vast region in Northeast Asia, now divided between China and Russia).

Karbyshev took part in the Russo-Japanese War of 1904-1905. With his battalion, he fortified Russian positions, deployed communication facilities, established bridges and led exploratory attacks. He was awarded five orders and three medals. He finished the war with the rank of lieutenant. After the war Karbyshev was transferred to the reserve for propaganda among soldiers. He then lived and worked in Vladivostok. In 1907 the creation of the Vladivostok Adscript Sapper Battalion began. Experienced officers were required and Karbyshev was summoned to military service again. In 1911, he graduated from the Nikolaevskaya Military Engineering Academy with honors. He was to be allocated to command the Sevastopol Fortress (located on modern Ukraine’s Crimea peninsula) mine company, but instead was sent to Brest-Litovsk (located on the Polish-Belorussian border), where he took part in the construction of the Brest Fortress, which later changed hands several times and earned the title of Hero Fortress in the World War II.

Karbyshev took part in World War I from its first day. He fought in the Carpathian Mountains in General Brusilov’s Eighth Army (the South-Western Front). He was the division engineer in the 78th and 69th infantry divisions and in the 22nd Finnish rifle corps. At the beginning of 1915 he took part in the assault on the Przemysl Fortress in South-Eastern Poland and was wounded in the leg. For his courage, he was promoted to lieutenant colonel and awarded the Order of St. Anna with swords (specifically awarded for bravery in battle). In 1916 he took part in the famous Brusilov Offensive, which is considered the Russian Empire’s greatest success of World War I and one of the most lethal battles in world history, with around two million casualties. 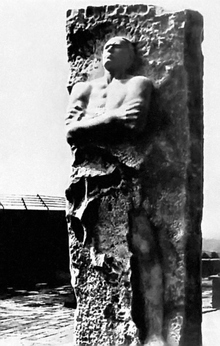 In December 1917 Karbyshev joined the Red Army. During the Russian Civil War of 1917-1923 he took part in the construction of several fortified regions across Russia and participated in the engineering support of the Kakhovsky foothold on the eastern bank of the Dnepr River in modern Southern Ukraine. He held positions of high responsibility in the North Caucasus military district. In 1920 Karbyshev was appointed Chief Engineer of the Fifth Eastern Front Army. He commanded the fortification of Zabaikalskiy to the East of Lake Baikal. In autumn 1920 he became the assistant of the Southern Front Chief Engineer. He led the engineering support of the assaults of the 1920 Perekop-Chongar operation (which led to the Red Army’s breakthrough in Crimea), and for that he was awarded a gold watch with his name inscribed on it. From 1921 Karbyshev was the Chairman of the Engineering Committee of the Red Army’s Main Military Engineering Department. In November 1926 he started teaching at the Mikhail Frunze Military Academy. In February 1934 he was appointed Head of the Military Engineering Sub Department of the General Staff Military Academy, and two year later became Head of the Higher Formation Tactics Sub Department, and only in 1938 Karbyshev graduated from the General Staff Military Academy himself. The same year he was given the title of academic professor. In 1940 he was promoted to the rank of engineering troops lieutenant general.

Karbyshev was the first Soviet scientist to fully research and develop the military use of destruction and man-made obstacles. He also contributed significantly to the research on across-water operations. He published over 100 works on military engineering and war history. His articles and textbooks on the theory of engineering support and engineering troops tactics were the main materials in the preparation of Red Army commanders in the pre-World War II period. In 1941 Karbyshev received the title of Doctor of Military Science (military Grand Ph.D.). He also took part in the commissions that developed and published military engineering instructions for the Red Army.

Karbyshev participated in the Winter War between the Soviet Union and Finland in 1939-1940. As part of the group headed by the Deputy Chief of the Main Military Engineering Department, he handed out recommendations to the troops on the engineering support of the breakthrough of the key Finnish Mannerheim line of defense. At the beginning of June 1941 Karbyshev was transferred to the Western Special Military District. The German Invasion found him in the Third Army headquarters in Grodno (in modern Belarus). Two days later he moved to the Tenth Army headquarters. On June 27 the headquarters was surrounded, and in August, during an attempt to escape the encirclement, Karbyshev received a heavy concussion in a fight near the Dnepr River and was taken prisoner. The Germans tried to persuade him into betrayal numerous times, but failed. In the German concentration camps Sajmiste, Hammelburg, Flossenburg, Majdanek, Auschwitz and Sachsenhausen, Karbyshev was one of the resistance chiefs. On the night of 18 February 1945 in the Mauthausen concentration camp, Austria, he was killed together with around 500 other prisoners. The Nazis had them soaked with water in freezing cold.

Dmitry Karbyshev was posthumously awarded the title of Hero of the Soviet Union on 16 August 1946, as well as the Order of Lenin, the Red Banner and the Red Star. A white marble monument to Karbyshev was erected at the entrance to the memorial at the former Mauthausen concentration camp.