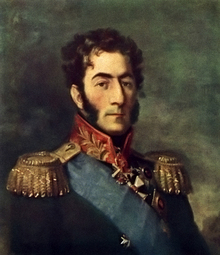 Bagration descended from an ancient Georgian royal dynasty of Bagrations (Bagrationi in Georgian) coming from the Tao-Klarjeti region in the south-west Georgia. The Bagrationi actually governed Georgia for almost 900 years. Among Peter’s ancestors one could find many monarchs and prominent statesmen.

For example: the greatest of Georgian kings, David IV the Builder, who liberated the country from the Turk-Seljuks in 1121; legendary Empress Tamar, whose reign was called ‘the Golden Century’ in Georgian history; King George VI the Brilliant, who liberated Georgia from the Mongols in the 1330s and restored Georgian monasteries in the Holy Land; Kings George VII, Bagrat V, Luarsab, Simon, and others, and, last but not least (as some genealogists believe), the great nomadic conqueror Timur (Tamerlan) who invaded Georgia eight times within 14 years in the XIVth century.

Unfortunately, little information is available about the early period of Bagration's life. was born in 1765 in Kizlyar (Dagestan, Northern Caucasus). His father, Ivan Bagrationi was a Colonel in the Russian army, but despite a great number of royal ancestors, the family didn’t have any powerful patrons or money.

Pyotr later recalled that his parents often told him stories of his ancestors and their heroic battles. Perhaps for this reason, he showed great interest in and a love for a military career. “With the milk of my mother, I have poured in myself a spirit of dash bravery,” Pyotr Bagration wrote later. In 1782, at the age of 17 he enlisted as a sergeant in the Astrakhan Infantry Regiment and thus began a military career spanning almost 30 years.

He served for some years in the Caucasus, participating in the campaigns of 1783, 1784, 1785, and 1786. Having shown himself as a brave and courageous soldier, he prepared for the hardships of military life. Later he participated in the siege of Turkish fortress Ochakov (1788), and in the Polish campaign of 1794, being involved in the capture of Warsaw. He hadn’t got any academic education and learned mainly from his experience in the field, consecutively passing all ranks from sergeant up to captain (1792), then second major, premier-major and lieutenant-colonel (1794).

In 1798, he was promoted to colonel and by the next year he was a major-general. His merits were recognized by legendary Field Marshal Aleksandr Suvorov, whom he accompanied in the glorious Italian and Swiss campaigns of 1799, winning particular distinction with the swift capture of the town of Brescia. Suvorov liked Bagration’s ferocious battlefield style and grew fond of him, familiarly calling him ‘Prince Peter’ (‘Knyaz Pyotra’ as he pronounced) and always showed his respect and trust. Bagration was famed for remaining cool-headed in the most dangerous situations and for always taking calm, measured decisions; at the same time showing great personal bravery.

In the campaign against Napoleon in 1805 Bagration's achievements appeared even more brilliant. With a small rearguard he successfully resisted the repeated attacks of French forces outnumbering his own five-fold (Battle of Hollabrunn, November 16 1805), and though half his men fell, the retreat of the main army under Kutuzov was thereby secured.

At the famous battle at Austerlitz (December 2 1805) Bagration fought against the left wing of the French army commanded by Murat and Lannes. At the battles of Eylau (February 7 1807), Heilsberg (June 11 1807) and Friedland (June 14 1807) he fought with the most resolute and stubborn courage. For his actions at Friedland, Bagration was awarded a golden sword decorated with diamonds, with the inscription ‘For bravery’.

During the Russo-Swedish War of 1808, he commanded the 21st Division and successfully occupied southwestern Finland, including Abo. He defeated the Swedish landing near Abo in September 1808, and on March 15 1809 led the daring march across the frozen Gulf of Bothnia to occupy the Åland Islands which precipitated the coup d’etat in Stockholm.

The same year he was unexpectedly sent to a Russian army in Moldavia operating against Turkey. Some historians believe that this rapid transfer from Finland, where the war had just ended, to Moldavia, where it would last without results for three years, was, in effect, a sort of reprimand. The Royal Court in St. Petersburg did not wish to see him near the capital due to his alleged affair with the grand princess Ekaterina Pavlovna (a favourite sister of Emperor Alexander I), who was half as young as Bagration (she was born in 1788).

As a result the princess was forced to marry Prince George of Oldenburg in April 1809, while Bagration after being promoted to a rank of General of Infantry was appointed deputy to Commander-in-Chief General Prozorovsky on July 13 1809. After Prozorovsky’s death on August 21, he led the army and immediately launched an offensive southward, capturing the fortresses of Macin, Constanta, and Girsov and reaching Cavarna and Bazardjik.

On September 16 1809, Bagration defeated the Turks at Rassevat and on September 22 besieged Silistra, forcing the Grand Vizier Yussuf to cancel his invasion of Serbia and Wallachia. Bagration halted a superior Turkish army at Tataritsa on October 22, but had to lift the siege of Silistra due to the lack of supplies and ammunition. He succeeded in seizing the strongholds of Ismail and Braila in late 1809. However, in March 1810 he resigned due to a disagreement with the Emperor on the overall strategy and for over a year he traveled in Austria and Russia arranging his private affairs. 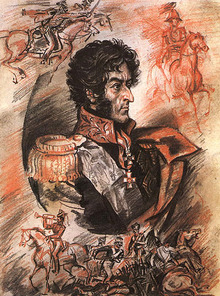 The 1812 war with Napoleon and death

During the 1812 Patriotic War Bagration commanded the 2nd Western Army which successfully eluded Napoleon’s enveloping maneuvers and achieved minor victories at Mir and Romanovo. He outmaneuvered French Marshal Nicholas Davout at Moghilev and joined, despite extremely tense relations, with the other Russian army under Mikhail Barclay de Tolly at Smolensk on August 3. He was able to perceive Napoleon’s plans and successfully defended Smolensk on August 15-16. His bitter opposition to the retreat conceding land for time finally led to the dismissal of Barclay de Tolly and the appointment of Mikhail Kutuzov as a Commander-in-Chief instead.

On September 7, Bagration commanded the Russian left flank at the main battle at Borodino and fiercely defended the earthwork fortifications (later called ‘Bagration’s fleches’) against the French attacks. The French twice took control of the fleches and twice were driven away. During the second attack by the enemy, Bagration personally led his troops to the counter-attack and was wounded (for the fourth time in his military career) by a shell splinter to his left leg.

The wound became infected and he died on September 24, 1812 in the village of Simy (Vladimir region). He was buried at a local church but in August 1839 his remains were transferred to the Borodino battlefield and remain there to this day (although the grave had been blown up in World War II, it has since been restored).

Being of average height, thin, with wavy brunette hair, Bagration had the typical Georgian hooked nose that gave way to a number of witticisms and jokes. Once, his aide-de-camps Denis Davydov told him that an enemy is very close – already ‘on their nose’. Bagration calmly replied. ‘On whose nose? If mine, we have enough time to have a breakfast. If yours, we have to hurry!’ He wasn’t handsome, but the glory and reputation of Suvorov's disciple made a strong impression. Soldiers called him ‘The Eagle,’ while among the general population he was known as ‘Bog-rati-on’ (‘Bog [the God]-rati [army]-on [he is]’ – The God of the Army.’). 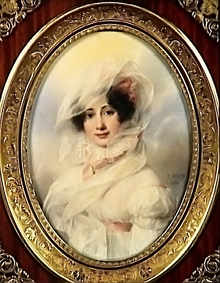 Bagration’s family life, contrary to his career, was a complete failure. He was married to Ekaterina Pavlovna Skavronskaya, an outstanding beauty and a-lady-in-waiting of Empress Maria (the wife of Paul I) in 1800. She became involved with Peter after his return from Italy and Switzerland, and Emperor Paul I, upon hearing about their relations, forced them to marry (he had a hobby of arranging weddings for his generals and courtiers). None of the two had serious feelings for another and the marriage proved to be a disaster.

Catherine soon fled and spent most of time traveling throughout Europe. She finally settled in Vienna, where she was believed to act as a female «007» – a secret Russian agent both during the Napoleonic Wars and afterwards. She became a mistress to Austrian chancellor Clemens Metternich (he called her the Naked Angel) and gave birth to his daughter Clementine, whom Bagration, under pressure of Alexander I, declared to be his own (Alexander wanted to employ her as leverage for influence on Austrian foreign policy).

Furthermore, Pyotr paid thousands of roubles for debts Catherine had accumulated from living in Vienna. It was not certain if it ruined his marriage or not, but Bagration was renowned for being a heavy gambler. Once he owed more than 80,000 roubles (an exorbitant sum in early XIXth century, when the price of a well-bred horse hardly exceeded 150 roubles) and was forced to sell his estates to cover the debts.

Bagration's name was widely known not only in Russia, but also well beyond its boundaries. During the thirty years of his army service, Bagration fought in 20 campaigns and almost 150 battles and minor skirmishs, successfully commanding at all unit levels.

Many outstanding military figures of Western Europe of that time regarded his talent highly. In the opinion of Polish General Kolachkovsky, one of the participants of 1812 campaign, Bagration ‘belonged to a number of the most famous military leaders of his time’ and might be put in line with Napoleon, Suvorov, Kutuzov, Ney, Davout and many others. Napoleon himself considered Bagration to be the best general in the Russian army.

Over 130 years later Joseph Stalin chose Bagration as the name of the Soviet Union's summer 1944 offensive operation in Belarus which was extremely successful and shattered the military power of Nazi Germany.