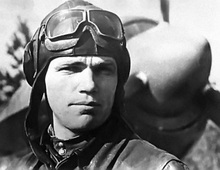 Ivan Kozhedub was a Soviet military aviator, a three-time Hero of the Soviet Union and one of the most resilient fighter aces of WWII. He was never shot down though his damaged fighter was often cited at various airfields.

Kozhedub was born into a poor rural family on 8 June 1920 in the village of Obrazhiyivka, near the city of Shostka in western part of the USSR. He was the youngest of five children.

His father was rather an unusual person for his social status; working at the factory and doing country work, he found time to read books and even to compose verses. He was religious, strict and a persevering tutor.

One time Ivan’s father, despite the protests of Ivan’s mother, sent his 5-year-old son to guard a garden at night. Much later Ivan asked his father about this situation pointing out that thieves were rare in that area and no matter what happened such a watchman would have been of a little use. His father answered - "I accustomed you to the difficulties."

At the age of six Ivan learned to read and write and soon went to school. After finishing a seven-year program he was accepted into the Shostka Chemistry Technological College. In 1938 he became a member of the aeronautic club. In April 1939 Kozhedub made his first flight. The inquisitive young man was greatly impressed by the beauty of his native land that opened up to him from a height of 1500 meters.

In 1939 he mastered his aviation skills on the Polikarpov U-2 (U stands for Russian uchebny meaning “for study”). In 1940 Kozhedub was called up for military service in the Red Army. In 1941 he was admitted to the Military Pilots’ Aviation School in Chuguev. He was one of the best students and graduated as an aviation instructor.

In 1941, following the start of the Great Patriotic War, the aviation school together with Kozhedub, was evacuated to the Asian part of the country. Kozhedub was desperate to take part in military action and asked to be sent to the frontline. But he was not allowed to participate in the war until November 1942.

He remembers: “I requested a transfer to the front more than once. But the front required well-trained fliers. While training them for future battles, I was also training myself. At the same time, it felt good to hear of their exploits at the front. In late 1942, I was sent to learn to fly a new plane, the Lavochkin La-5. After March 1943, I was finally in active service.”

Ivan Kozhedub performed his first military flight on 26 March 1943 on an La-5 fighter. It was not successful and his plane was badly damaged by a pair of Messerschmitt Bf 109s. He was able to land his fighter but the aircraft was ruined.

After that first operation he conducted flights on rather old airplanes for a few months before receiving a new La-5 with the board number 75. The plane was named after the famous Soviet aviator and Hero of the Soviet Union Valery Chkalov. 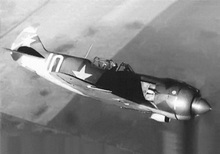 During the Battle of Kursk Ivan Kozhedub, then a 23-year-old pilot, opened his fighting account. On 6 July 1943, having entered a fight with 12 enemy planes as part of a squadron, the young pilot gained his first victory by forcing down a Nazi Ju-87 bomber. The next day he gained a new victory by bringing down another Ju-87. On 9 July Kozhedub simultaneously destroyed two Bf-109 fighters.

By October 1943 Senior Lieutenant Kozhedub had made 146 fighting starts and personally brought down 20 enemy planes. By that time he was fighting as an equal with German air experts. Kozhedub skillfully combined his piloting technique with firing skills.

In clashes over the Dnieper, pilots from Kozhedub’s air regiment met Göring’s Jagdgeschwader 51 (JG 51) Mölders squadron and won the duel. Ivan Kozhedub increased his fighting account. In 10 days of intense fighting he personally brought down 11 enemy planes. He was awarded with the order of the Hero of the Soviet Union on 4 February 1944.

Violent, tireless, brave and skilful, Kozhedub was the ideal air fighter. His attitude towards his aircraft was like a religion. Kozhedub once said: "The motor works accurately. The plane is obedient to my every movement. I am not alone – my fighting friend is with me." For Kozhedub this was not poetic exaggeration or a metaphor; approaching the cabin before take-off he always found some tender words for his plane.

In May 1944 Kozhedub was promoted to captain and became the commander of a squadron. With 38 air victories under his belt, he received a new La-5F - a gift from a farmer named Vasily Konev. Konev gave money to the Red Army and asked that a plane be constructed in the name of his nephew, Lieutenant Colonel Georgy Konev, a fighter pilot who died at the front. The request of the patriot was executed and the plane was transferred to Ivan Kozhedub. 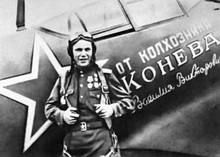 By mid-1944 Guard Captain Ivan Kozhedub had performed up to 256 combat missions and shot down up to 48 enemy planes. On 19 August 1944 he was awarded a second medal, this time a Gold Star.

Once, in an air battle over enemy territory, Kozhedub’s La-7 was hit. When the engine stalled Kozhedub didn’t surrender, but chose a target on the ground and began to dive. When he was close to the ground the engine suddenly began to function again and Kozhedub brought the plane out of the dive and returned safely to his base.

On 19 February 1945 during a military operation near Frankfurt (Oder) Kozhedub destroyed an Me-262 jet that was piloted by the officer Kurt Lange. The Me-262 was a German reactive plane. Kozhedub’s La-7 was a turbo probe airplane. That day, having risen into air together with Dmitry Titorenko, Kozhedub came across the unknown plane flying at a speed unreachable by the La-7 at a height of 3500 meters.

Kozhedub later described this duel: "What is it? My partner hurried opening fire at the enemy! But suddenly the German plane began to move to the left towards me. The distance was sharply reduced and I approached the enemy. With involuntary excitement I opened fire. The jet plane collapsed and fell down."

On 22 April 1945 Kozhedub was attacked by a couple of American F-51 "Mustang” fighter planes. But soon after the attack they would bitterly regret their insolence. After just two minutes one of the "Mustangs" shattered into pieces; the second pilot barely had time to jump with a parachute.

During the war Kozhedub made 330 successful fighting starts and 120 air fights and personally brought down 62 enemy planes. On 18 August 1945 he was again awarded the title Hero of the Soviet Union for his military skills and personal courage.

After the war Kozhedub continued to serve in the Air Forces. In 1949 he graduated from the Military Aviation Academy.

During the Korean War (1950 – 1953) he commanded the 324th Aviation Division, which gained 239 victories and brought down 12 Boeing B-29 Superfortresses. Kozhedub was forbidden to engage in fighting personally and during this period he didn’t gain any official victories. But the participants of those events later said that some times Ivan Kozhedub nevertheless took to the skies.

In 1956 he became part of the Joint Staff of the Military Academy. From 1971 he served in the Central Office of the Air Forces and from 1978 in the group of general inspection of the Ministry of Defense of the USSR. He was made an Aviation Marshal in 1985.