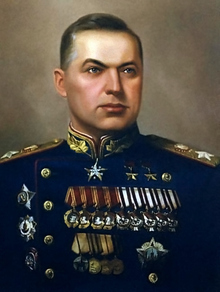 Konstantin Rokossovsky was born in Velikie Luki, a small Russian town not far from Pskov. His father, a man of Polish origin, was a railway machinist, and his mother was a Russian schoolteacher. Soon after Konstantin’s birth the family moved to Warsaw. Konstantin was just 5 years old when his father died in a railway accident. The family was left aground; they were very poor and Konstantin was forced to abandon his studies after grade 4 to work in a factory producing stockings. In 1911 Konstantin’s mother died. The boy and his little sister Helena were left orphans. Konstantin kept working as an unskilled laborer. However, he found time to read many books in both Russian and Polish.

When World War I broke out Konstantin Rokossovsky joined the Russian regiment that moved through Warsaw to the west. He was almost 18 years old by then, and was warmly welcomed by the regiment. He started as a private soldier, but thanks to his military talent, courage and leadership he soon became a junior non-commissioned officer. He remained as such until October 1917. That’s when Rokossovsky joined the Communist Party and entered the Red Army. Step by step, the young and ambitious man advanced to the rank of battalion commander. He played an active role in defeating the White Guard, including the troops headed by Alexander Kolchak. For his outstanding results Rokossovsky received the Order of the Red Banner, which was the highest military decoration in Soviet Russia.

In 1923 Rokossovsky married Julia Barmina, and in 1925 their daughter Ariadna was born. After two years of studying at the Higher Cavalry Commander School, Rokossovsky was invited to serve as an instructor in the Mongolian army. He spent several years defending the Chinese Eastern Railway until it was sold to Japan in 1935.

In August 1937 Rokossovsky was falsely accused of having connections with the Japanese and Polish secret services. He was arrested and put in prison. Rokossovsky spent three years in the ruefully famous jailhouse “The Crosses” (“Kresty”) in Leningrad. Despite imprisonment and torture, he remained courageous and denied all charges. In 1940 Rokossovsky was released. After meeting with Stalin, Rokossovsky was reestablished in the Red Army and in the Communist Party. Soon after he was given the rank of major general.

When World War II started and the Nazis attacked the USSR, Rokossovsky commanded the 9th Mechanized Corps. Despite a lack of tanks, the troops headed by Rokossovsky wore out the enemy and retreated only upon order. Rokossovsky was promoted and became the commander of the 16th Army that was obliged to protect the Volokolamsk approach to Moscow. It was an extremely difficult task due to a lack of soldiers and transportation. However, Rokossovsky managed to maintain an unbroken defense line. Rokossovsky proved himself as a gifted commander. The Nazi plan for a quick Moscow capture collapsed. Rokossovsky was honored with the Lenin Order. 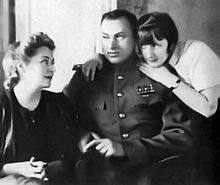 In March 1942 Rokossovsky was badly injured by a shell splinter. He spent two months in a Moscow hospital, but as soon as he got well he took command of the 16th Army again. In September 1942 Lieutenant General Konstantin Rokossovsky was appointed commander of the Stalingrad Front (also known as the Don Front). He was among those who elaborated the so-called “Uranium Plan” which resulted in the capture and defeat of the 6th German army headed by field marshal von Paulus. The 6th Army’s attack on Stalingrad was stopped. For his deeds, Rokossovsky received the Suvorov Order.

In February 1943 Rokossovsky wrote in his diary: “I’m appointed commander of the Central Front. It means that Stalin has entrusted me to play the key part in the summer Kursk campaign.” Actually, Rokossovsky was responsible for stopping the Nazi’s attack in the outskirts of Kursk in 1943. It was the turning point of the whole of World War II. Rokossovsky showed himself as a brilliant strategist. Using Soviet secret service data, he managed to define the exact point of the Nazi’s principal thrust and organized a strong defense line. Rokossovsky guaranteed victory in the Kursk Battle. Soon after that, he was promoted to colonel general and finally general.

Konstantin Rokossovsky went on to become one of the most talented Soviet commanders. He confirmed his status during the operation of Belorussia’s liberation known as “Bagration.” It was the strongest attack in the history of both world wars. Some historians believe that Stalin called Rokossovsky “my Bagration.” As soon as operation “Bagration” had been successfully completed, Rokossovsky was given the Diamond Star of the Soviet Union Marshal. Afterwards Rokossovsky, as commander of the 1st Belorussian Front, participated in the liberation of Poland, which he considered to be his native land.

By the end of World War II Konstantin Rokossovsky was heading the 2nd Belorussian Front. It was Rokossovsky who commanded the Victory Parade in Moscow on the 24 June 1945.

After the end of World War II, Stalin ordered Rokossovsky to re-organize the Polish army. Rokossovsky became Polish Minister of National Defense and remained as such until 1956 when he became Minister of National Defense in the USSR, but only for a brief time. The new leader of the Soviet Union, Nikita Khrushchev, demoted him after Rokossovsky declined to write an article about Stalin’s crimes. Some historians believe that Rokossovsky refused because he respected Stalin deeply, others think that he just didn't want to interfere in politics. However, shortly before his death Rokossovsky wrote his memoirs “A Solder’s duty.”

Konstantin Rokossosky died 3 August 1968. He is buried in the Kremlin Wall Necropolis located on the Red Square in Moscow.