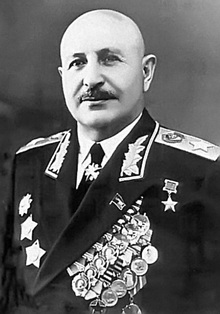 Ivan Bagramyan was born into the poor family of an Armenian railway worker in the village of Chardakhlu near the city of Yelizavetpol in the Caucasian part of the Russian Empire (now Ganja, Azerbaijan).

Young Ivan began his education at a two-year Armenian Church school in Yelizavetpol. From 1907 to 1912 he attended a railway college in Tiflis (now Tbilisi, Georgia), after which he entered a local technical institute, graduating in 1915 with a degree in engineering.

That same year he joined the Russian Army as a volunteer in the 2nd Caucasus Frontier Regiment of the Russian Expedition Corps and spent the remainder of WWI fighting the Ottoman Empire on the Caucasian Front. In June 1917 he graduated from the Tiflis Paraporshik Academy as a junior commissioned officer.

After the February Revolution in 1917 Bagramyan supported the Armenian national party Dashnak. Following the disintegration of the Russian Empire Armenia became an independent state. Bagramyan joined the newly established Armenian Republican Army under General Silikyan’s command and actively participated in operations against the Turkish army as the leader of a sabre squadron.

In 1920 he supported a revolt against the government and voluntary joined the Red Army as a commander of a squadron of the 1st Armenian Regiment. He played an active roll in establishing Soviet authority over the northern part of Armenia and then Georgia. In 1923 he was appointed commander of the Leninokan Cavalry Regiment in the Armenian Infantry Division. 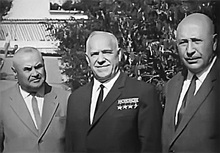 After the end of the Civil War in 1924 he was sent to Leningrad to the Cavalry School. He studied alongside well-known military leaders such as Zhukov, Rokossovsky and others.

In 1925 Bagramyan returned to his division in Leninokan. In 1931 he was accepted into the Frunze Military Academy, graduating in 1934. Bagramyan’s academic certification stated: “…wide political outlook. Exclusively accurate at work. Wide military erudition. Strong-willed character. Faultless discipline. All courses finished with good and excellent marks… Capable of commanding cavalry divisions.”

During the period of Stalin’s Great Purge Bagramyan fell under suspicion for his early connections with the Armenian Republican Army. But with the help of Anastas Mikoyan, a member of the Politburo (the central policymaking and governing body of the Communist Party of the Soviet Union), the arrest warrant was revoked and Bagramyan was rehabilitated.

In 1936 he was admitted into the Military Academy of the Soviet General Staff. But in 1937 Bagramyan’s brother was accused of being “an enemy of the state.” The future Marshal sought to help his brother in every way but in without success. Bagramayn was later punished for being a relative of an “enemy of the state.” Despite achieving excellent results in the graduation exams at the academy he didn’t find his name among the graduates and soon after he was dismissed from the army.

Living in poverty with no chance of getting a civil job, Ivan Bagramyan turned to extraordinary measures. He and another unjustifiably dismissed officer went directly to the Kremlin to see the People’s Commissar for Defense Kliment Voroshilov. They were not admitted, but they kept on trying. They sat under one of the Kremlin towers for some time before finally receiving an audience. Right after the meeting Ivan Bagramyan became a senior instructor and lecturer in the Military Academy.

In 1940 Zhukov was appointed commander of the Kiev Military District in the western part of USSR. Bagramyan wrote a letter to his former classmate stating that he had “a strong desire to come back to the army,” adding that “any position is acceptable!”

Soon after, under Zhukov’s command, Bagramyan was promoted to Head of Operations for the Soviet 12th Army based in Ukraine. Within three months Bagramyan, then a colonel, was appointed Deputy Chief of Staff of the Southwestern Front, headquartered in Kiev.

On 22 June 1941 Nazi Germany violated the Molotov-Ribbentrop pact and attacked the USSR.

Ivan Bagramyan believed the German invasion was inevitable, unlike the majority of the USSR military commanders who were caught off guard by the offence. Ivan Bagramyan also believed that the German military operation would probably be similar to the operation against Poland. He expected Nazi troops to use lightening speed tactics - the Blitzkrieg.

Ivan Bagramyan took part in tank battles in Ukraine and in Kiev defense operations from August to September 1941. The operations collapsed and the German army captured the entire front, resulting in the isolation of four Soviet armies and the death of General Mikhail Kirponos. During the retreat Ivan Bagramyan headed the leading detachment of the staff. He escaped the Nazi isolation, saving more than 20 thousand troops. 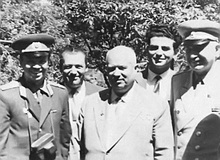 On 6 November 1941 Bagramyan was awarded with the Order of the Red Banner. Soon after he was appointed Chief of Staff to Marshal Semyon Timoshenko and coordinated fighting around Rostov. While stationed at the Southern Front Bagramyan served together with Nikita Khrushchev, then a political officer and a member of the military council. Later Khrushchev described Bagramyan as “a very precise person who reported on everything just as it was. How many troops we had, their positions, and the general situation.”

Ivan Bagramyan was well known for planning counter offensive operations. He played an active role during the Battle of Moscow and on 27 December 1941 was promoted to the rank of Lieutenant General. Marshal Zhukov was impressed by Bagramya’s skills and capabilities as a staff officer and appointed him Commander of 16th Army on the Western Front. Bagramyan replaced former commander Konstantin Rokossovsky. He remained in this position from July 1942 to April 1943.

Ivan Bagramyan took an active role in all the major battles of WWII, including the Battle of Kursk, which marked a turning point in the war. During the battle Bagramyan, with the 11th Army under his charge, conducted an offensive operation codenamed “Kutuzov” as a part of the Oryol Direction Offensive Operation. The plan was devised by a conglomerate of commanders. But Ivan Bagramyan insisted on his own plan that had the support of Stalin personally.

The maneuver was successfully concluded with the 11th Army troops advancing more than 70 km inside enemy territory. For this operation Ivan Bagramyan was prompted to the rank of Colonel General.

Son of the regiment

According to Ivan Bagramyan’s children and his colleagues, the Marshal was a judicious and fair man. He never overreacted nor did he allow others to overreact.
In 1943 Ivan Bagramyan was in command of the 11th Guard Army. In the village of Kochukovo in the Kaluga Region, soldiers found an 11-year-old boy and brought him to the army staff office. His name was Afonya Firsov and he had run away from home to join the Red Army in its desperate fight against the Nazi invaders. He was left at the staff office and became the “son of the regiment” (a term used to describe an orphan that stays with the military unit under its charge). Ivan Bagramyan was very attentive to the boy and helped him enter the Suvorov Military Academy (a specialized military school for teenagers). In June 1945 during the historical victory parade on the Red Square both Ivan Bagramyan and Afonya Firsov were present - the former as Commander of 1st Compounded Baltic Regiment, the latter as one of the best students of the Suvorov Military Academy. 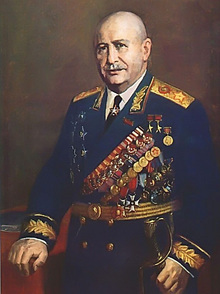 End of the war

In 1945 Bagramyan’s army advanced to East Prussia. On 9 May he accepted the surrender of the German Forces in Latvia and captured Königsberg (now Kaliningrad).
For his participation in the war he was awarded with many awards and medals, including two Orders of the Hero of the Soviet Union, seven Orders of Lenin, the Order of the October Revolution, three Orders of the Red Banner and the Order of Kutuzov.

Following WWII Marshal Bagramyan remained in charge of the Baltic Military District. In 1955 he was appointed Deputy Minister of Defense and headed the Military Academy of the General Staff. He also wrote many military journals.

Marshal Bagramyan retired in 1968 and died in 1982. His cinerary urn was buried in the Kremlin wall at the Red Square in recognition of his achievements.