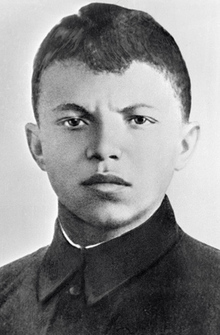 Aleksandr Matrosov was a Soviet soldier who died heroically during World War II. However, several versions of his biography exist and historians continue to research the circumstances of his life and death.

According to the traditional version, Aleksandr Matrosov was born 5 February 1924 in Dnepropetrovsk. His parents died when he was little boy and Aleksandr was brought up in an orphanage. Later he found himself in a labor colony in Ufa. In November 1942 Matrosov left for the front as a volunteer and served in the Soviet infantry. On 27 February 1943 in the battle for a village near Pskov, Aleksandr Matrosov sacrificed his life by blocking a Nazi machine gun pillbox with his body. He disabled the machine gun, allowing his comrades to continue the attack and win the battle. On 19 June 1943 Matrosov received the award of “the Hero of the Soviet Union” posthumously. Impressed by the feat, Josef Stalin wrote: “The great deed of Aleksandr Matrosov should be an example of military valor and heroism for all the warriors of the Red Army.” Indeed, during World War II over 300 soldiers repeated Matrosov’s feat.

But some historians believe that Aleksandr Matrosov was not the true name of the heroic young man. They claim his name was Shakirian Mukhamedyanov, and that he was born not in Dnepropetrovsk, but in the small village of Kunakbaevo in Bashkiria. According to one version, 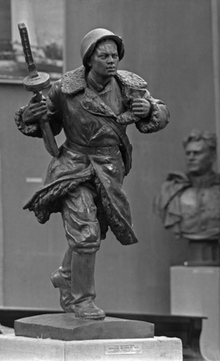 investigated and presented in the end of the 20th century, Shakirian, the future hero, was the son of a handicapped man and the most beautiful woman of the village, who died soon after Shakirian’s birth. His father married for the second, and then a third. The family was very poor, and Shakirian did not get on with his stepmother. He left his father’s home and wandered around the country with other homeless children. Finally, he appeared in an orphanage, calling himself Aleksandr Matrosov. Historians believe he did so in order to obtain a Russian-sounding name, and that the last name “Matrosov” originated from his nickname “sailor” (“matros” in Russian), which he got because of his habit of wearing striped shirts as sailors did. Matrosov spent just one year in the orphanage and then became a laborer at the carriage works. He did not like his job and escaped. He was then arrested for larceny and sent to a labor colony in Ufa. Matrosov worked as a teacher’s assistant in the colony until 1942 when he became a cadet in the infantry college and then left for the front.

Regardless of what the true name and real life story of Aleksandr Matrosov were, there is no doubt about his heroic deed. The details of the event, however, are still being studied. Nowadays some historians blame Soviet propaganda for presenting Matrosov’s feat in a very unrealistic way. Some modern researchers state that one human body was not enough to disable a machine gun. Others believe that Matrosov did not intend to put the machine gun out of action but wanted only to make his way as close as possible in order to kill the Nazi soldier operating the gun. There are differing points of view, but researchers are unanimous in claiming that Aleksandr Matrosov did his best and sacrificed his life to help his fellow soldiers win the battle.

Aleksandr Matrosov is buried in a communal grave in the town of Velikie Luki near Pskov. Monuments to Aleksandr Matrosov were erected in Ufa, as well as in many other cities. His name was given to city streets, museums, schools, cinemas and ships.