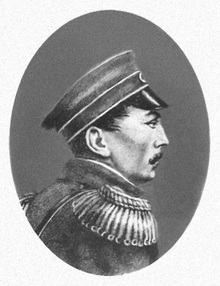 The name of Pavel Nakhimov, an outstanding Russian admiral and naval commander, is associated with the heroic struggle against Turkish and Anglo-French invaders in the 19th century. Historians believe Nakhimov was a “military genius.”

Born in 1802 in the small village of Gorodok not far from Smolensk, Pavel Nakhimov grew up in a poor noble family. He had ten brothers and sisters. Pavel was just 13 when he entered the Naval Academy for the nobility in Saint Petersburg. He was an excellent student, and at the age of 15, Nakhimov was promoted to the rank of warrant officer. He made his first sea voyage on the board a brig called “Feniks,” navigating the Baltic Sea.

Nakhimov’s biographers remark that he was obsessed by the sea from the very beginning of his career. Naval service was the sense of his life. After his first sea voyage, Nakhimov didn’t want to be anywhere but on board a military ship or in a military port. He gave himself completely to his vocation.

In 1817 Pavel Nakhimov became a midshipman, ranking among the best of the “Feniks” large crew. He made sea voyages to the shores of Sweden and Denmark and 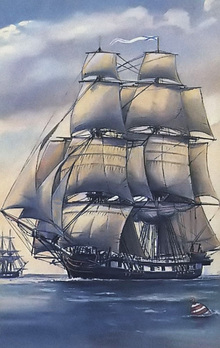 in 1818 Nakhimov graduated from the Naval Academy. Immediately after graduation the talented sailor was assigned to the Second Fleet Crew of the Russian Imperial Navy’s Baltic Fleet. After his experience in the Baltic and White Seas, he began to feel the desire to discover new destinations. When Mikhail Lazarev, a commodore and an outstanding Russian explorer, invited Nakhimov to join the crew of the frigate “Kreiser,” Nakhimov accepted the invitation enthusiastically. In 1822-1825 he set sail on the “Kreiser.”

Upon returning to Russia after the three-year voyage, Pavel Nakhimov, now a lieutenant, met a girl named Aisha and married her. Soon after, he became a crewmember of the “Azov” ship. During a sea voyage Nakhimov was informed that his wife was pregnant. She gave birth to two girls. The 24-years old father was happy, but he didn’t have an opportunity to return home and experience the joys of parenthood. The family of Nakhimov’s wife didn’t approve of the young lieutenant, so the girl’s relatives forced Aisha, who was Hebrew, to give her daughters her last name.

In 1827 Nakhimov participated in his first sea battle. It was fought on 20

October 1827 during the Greek War of Independence in Navarino Bay on the west coast of the Peloponnesus Peninsula. The battle of Navarino was of great importance. It allowed the allied British-French-Russian fleet to defeat and destroy the combined 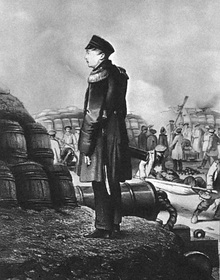 Ottoman and Egyptian armada. During the battle Nakhimov was injured. In December 1827 he received an honorable award, the Order of Saint Georgy, Fourth Class. Nakhimov’s bravery and courage were highly praised, and he was promoted to the rank of lieutenant commander. In 1828 he became the commander of the captured Turkish ship renamed “Navarino” in remembrance of the battle in which Nakhimov had his baptism of fire.

On 24 January 1834 Pavel Nakhimov was appointed Commander of the “Silistria” gun ship routed to the Black Sea Fleet. Commanding various ships, squadrons and detachments on the Black Sea, Nakhimov proved himself a gifted warlord. In 1845 he was appointed rear admiral and in 1852 - vice admiral. When the Crimean War started Pavel Nakhimov took command of the Black Sea squadron. The Crimean War (1853 – 1856) was fought between the Russian Empire on one side and the alliance of France, the United Kingdom, the Ottoman Empire and the Kingdom of Sardinia on the other. The reason for the war was rivalry for influence over the territories of the Ottoman Empire.

In November 1853 the squadron, under Nakhimov’s command, blocked the major forces of the hostile Ottoman Fleet and defeated them. The glorious victory in the Battle of Sinope made vice admiral Pavel Nakhimov the hero of the Crimean War. He was awarded the Order of Saint Georgy, Second Class. 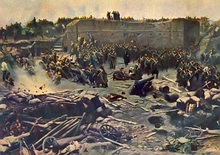 When the battleground was transferred to the Crimean Peninsula, Pavel Nakhimov, along with vice admiral Vladimir Kornilov and rear admiral Vladimir Istomin headed the Sevastopol defense. Appointed military governor of the city, Nakhimov was responsible for fortification constructions, sea battalion formations, and army and fleet interaction. Thanks to Nakhimov’s leadership, the poorly defended city of Sevastopol became a well-protected fortress. Nakhimov, who personally participated in battle, was injured many times.

On 28 June 1855 Nakhimov was taking a walk around the Sevastopol defense constructions, as was his daily habit. At 18:30 he was fatally wounded when he was shot in the head by a hostile sniper. Two days later Pavel Nakhimov died in hospital.

Admiral Pavel Nakhimov is buried in Sevastopol, in the Vladimirsky Cathedral. In 1944 the Soviet government established the “Nakhimov Order” and “Nakhimov Medal” honorable military awards for bravery. In 1959 a monument to Nakhimov was erected in Sevastopol. The name of Pavel Nakhimov has been given to city streets, ships and naval colleges in Russia.