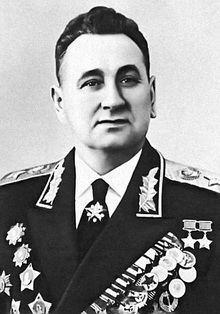 Andrey Antonovich Grechko was a Soviet military leader, government and party member and Marshal of the Soviet Union.

Andrey Grechko was born in the village of Golodaevka in the Rostov Region of southern Russia into a peasant family. His education consisted of only two years of schooling. He served in the Soviet army from 1919 and fought in the 1917-1923 Civil War as a soldier of the First Cavalry Army. In 1926, after graduating from cavalry school, where he received his main education, he commanded a platoon and then a squadron in the First Cavalry Brigade of the Moscow Military District. Ten years later he graduated from the Frunze Military Academy and in October 1938 he became Chief of Staff of the Special Cavalry Division of the Belarusian Special Military District. In September 1939 he took part in the Red Army’s march against the Nazis in Poland. In 1941 he graduated from the General Staff Military Academy.

During the first days after Hitler’s armies invaded the Soviet Union in June 1941, Grechko worked in the General Staff. In July he requested to be sent to the Southwestern Front and appointed commander of a cavalry division. In

1942 General Major Grechko was appointed Commander of the Fifth Cavalry Corps, which took part in the Barvenkovo-Lozovskaya offensive operation in Ukraine. Starting 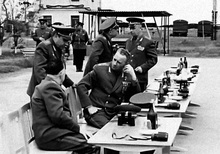 12 March 1942, he commanded a task force, which, as part of the Southern Front, fought the enemy’s superior numbers in Donbass (the Donets Basin). Starting 15 April 1942, he commanded the Twelfth Army defending the Voroshilovograd (now Lugansk, Ukraine) Region. Later, the Twelfth Army took an active part in the battle for the Caucasus. In September that same year, Grechko was appointed Commander of the 47th Army, whose task was to prevent the enemy from invading the South Caucasus along the Black Sea coast through Novorossiysk and using the Novorossiysk port. In October he took command of the 18th Army that stopped the enemy from crossing the Caucasus mountain range, and in November, successfully destroyed the group that attempted the crossing. In 1943, he took over the 56th Army, which participated in the battles in the South Caucasus and took part in the Krasnodar offensive as part of the North Caucasus Front. After the defeat of the German fascist forces in Kuban on 16 October 1943, Grechko was appointed Deputy Commander of the Voronezh Front (which on 20 October was renamed to the First Ukrainian Front), and took part in the liberation of the Ukrainian capital, Kiev.

On 15 December 1943, Grechko was appointed Commander of the First Guard Army, which he led until the end of the war, conducting various military operations that showed he was a courage commander, deliberate in fulfilling his daring plans.

From the end of the World War II until 1953 Grechko commanded the Kiev Military District. In 1953 he was chief of the Soviet military force in Germany. In 1955 he was awarded the highest military rank of Marshall of the Soviet Union. In 1958, he received the title of Hero of the Soviet Union, an Order of Lenin, and the Gold Star medal for showing courage and heroism in combating the fascist aggressors.

In 1960 he became First Deputy Defense Minister and Commander of the joint forces of Warsaw Pact. Three years later he became Soviet Defense Minister, and continued to work hard to further strengthen the defensive capabilities of the USSR. In October 1976, for his achievements in building and strengthening the Soviet military, Grechko was awarded a second Gold Star medal.

Andrey Grechko entered the Central Executive Committee of the Communist Party in 1961, and the Politburo in 1973. He was also a deputy of the second, and fourth through ninth Supreme Soviets of the USSR. He paid great attention to military studies and chaired the editorial commissions of the multi-volume “The History of the 1939-1945 World War” (“Istoriya Mirovoy Voyny 1939-1945”) and “The Soviet War Encyclopedia.”

Andrey Grechko is buried at Moscow’s Red Square, under the Kremlin wall.