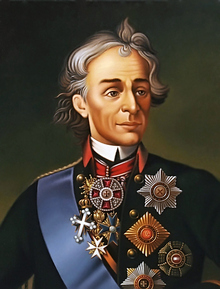 He didn’t seem cut for fame and fortune… yet Aleksandr Suvorov’s outstanding military brilliance brought him top honours and glorious victories. He’s remembered as one of the few great generals in history to never lose a battle.

Aleksandr Suvorov was born into a noble family in Moscow on November 24, 1729. He grew up so weak and sickly that Suvorov’s father, an army general himself, thought a civilian career would be his son’s only option. Nevertheless, the boy took a great interest in all things military and proved an eager reader and keen learner. He started rigorous workouts and used his father’s vast library to study military history, strategy and tactics. The efforts paid off – Suvorov eventually began active service in 1748 showing good leadership skills and bravery. However, it was not until Empress Catherine II – known as the Great – took the throne in 1762 that Suvorov’s career soared.
Suvorov himself later described his first meeting with the Empress as the one that led him on the path to glory.

In 1768, a string of victories in Poland earned him a rise through the ranks and a reputation of a boldly unconventional tactician. In 1773 Suvorov went to fight the Turks in what became known as the First Turkish War. His stunning victories over the Turkish army established him as a brilliant field commander and extraordinary leader. Yet he also proved a self-willed subordinate, acting on his own initiative.
Suvorov was tried and sentenced to death for unauthorised actions against the Turks but the Empress didn’t uphold the verdict, famously stating that winners can’t be judged.

In 1787 Suvorov took command in the Second Turkish War. Several dazzling victories followed, one of the most famous being the storming of the Izmail fortress on the Danube River in December 1790. Izmail was reputed to be unconquerable and its seizure by the Russian forces was seen as Suvorov’s military masterpiece and the key to Russia’s triumph in the war, propelling him to glory.

In 1794 Suvorov was called upon to crush a Polish revolt. In a swift and victorious campaign, culminating in the storming of Warsaw, he suppressed Polish resistance. He became known as a ruthless and brutal commander across Europe but gained the title of Field Marshal at home.
The legend has it that he broke the news of the victory to Catherine in a short note: “Hurrah from Warsaw, Suvorov. The Empress’ reply announcing his promotion was equally brief: ”Congratulations, Field Marshal. Catherine".

A man of steely character, bravery and strict self-discipline, Suvorov was adored by his men. He trained his army according to his own ideas, developed most famously in his major book “The Science of Victory”.
His was a whole new way of waging wars based on speed and mobility, accuracy of fire and the bayonet, as well as detailed planning and careful strategy. Abandoning drills, he instead communicated his ideas to the troops in a clear and understandable way. Suvorov also took great care of his army’s supply lines and living conditions, drastically cutting instances of illness among his soldiers.

But his innovative views clashed with those of the new Tsar. After Catherine died in 1796, her son Paul I tried to reform the army to fit his love of endless drills, parades and square-bashing. Fiercely opposing the ‘new’ methods, Suvorov quickly fell out of favour. He was dismissed, exiled to his estate and kept under surveillance. Soon, though, the Tsar, worried by Napoleon’s victories in Europe, needed the veteran back. 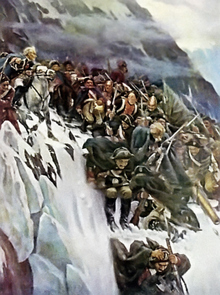 Sent to drive Napoleon’s forces out of Italy in 1799, the Field Marshal took command of Austro-Russian army. After a triumphant Italian campaign, he planned to march on Paris, but instead was ordered to oust the French from Switzerland, joining the Russian forces already there. However, the army he was meant to unite with was defeated before Suvorov could reach it. Blocked by the French, he withdrew his troops. His marvel of a strategic retreat through the Alps while fighting off the French cost him one third of his army, but gained him Europe’s admiration and the top rank of Generalissimo. He became the fourth and last holder of the title in pre-revolutionary Russia, until Josef Stalin was proclaimed Generalissimo of the Soviet Union.

The Tsar had soon had enough of the war and recalled Russia’s armies from Europe and Suvorov was again out of favour. The newly promoted Generalissimo found his hero’s welcome to St. Petersburg cancelled.
Worn out and ill, the old veteran died on May 18, 1800. He was buried in St. Petersburg, the inscription on his grave stating simply “Here lies Suvorov”.

Suvorov’s family life wasn’t a happy one. Despite their having a son and a daughter together, Suvorov’s relationship with his wife was a difficult one, apparently tarnished by her infidelity. Despite stunning military successes, Suvorov always felt ill at ease at court.
His love of a frugal lifestyle was often seen as odd: he shunned all comfort, preferring to lead a camp-like life even away from battlefields, sleeping on hay and refusing to wrap up warm in the chilliest weather. The story goes that he was once offered a fur coat by Catherine who ordered him to wear it. Unable to disobey the Empress yet unwilling to break his habits, he worked his way out of the problem by carrying the coat with him without putting it on.

Suvorov left Russia with expanded borders, renewed military prestige and a legacy of theories on the waging of war. One of the most educated people of his time, he was described by some of his contemporaries as one of the most extraordinary men of the century.
“Train hard, fight easy” – a saying he coined – became a Russian proverb. Almost 150 years after Suvorov’s death, Josef Stalin revived the memory of the legendary hero by creating the Order of Suvorov in a bid to restore Russian morale after the German invasion of World War II. Now, the Suvorov Military Schools across Russia provide initial military training and education to young men seeking a military career.