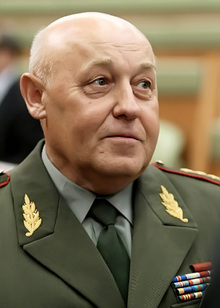 A Russian political and military figure, Yury Nikolaevich Baluevsky is the Deputy Secretary of Russia's Security Council, the First Deputy Defense Minister, an army general, and a former head of Russia's General Staff. He is the author of a plan for structural reform of the Russian army.

Baluevsky’s family roots go back to Central Russia's Vologda Region. His father worked as a primary school teacher and also fought in the 1939-1940 Soviet-Finnish War and World War II, receiving the 1st Class Order of the Patriotic War (awarded for heroic deeds during World War II) and the Order of the Red Star (awarded for “exceptional service to the cause of defending the Soviet Union in both war and peace”). Yury Baluevsky was born in the town of Truskavets in Ukraine’s (then the Ukrainian Soviet Socialistic Republic) Lvov Region, but in the mid-1950s, the family returned to the Vologda Region, settling in Novostroyka (“Newly-built”) Village. He received seven years of secondary education in a village school and afterwards continued his studies in a school in the nearby town of Kirillov. According to his form-master, he was a very serious boy, avidly interested in war history and absorbed by the books of the prominent Soviet WWI and WWII commander Georgy Zhukov. After he graduated, Baluevsky worked in his village school as a P.E. and arts teacher.

After graduation, Baluevsky served in the military as a commander of a motorized rifle platoon, and later of a motorized rifle platoon, before assuming the position of operational staff officer in the Belorussian military district. In 1974-1979 he served as officer and then senior officer in the operational staff of the Group of Soviet forces in Germany, and, at the same time, in 1976-1980 studied at the Frunze Military Academy in Moscow.

In 1979-1982 Baluevsky served in the Leningrad military district first as senior officer of the operational staff, then as senior officer of the district staff Command and Control. His brilliance at developing staff training programs, deep knowledge of the patterns and characteristics of contemporary warfare and skill at organizing interaction between different types of troops brought him, in 1982, to the Main Operational Directorate of the USSR General Staff. In 1990, after devoting 25 years of his life to an officer’s career, he graduated with honors from the General Staff Military Academy, and then returned to his service in the General Staff.

During the Georgia-Abkhazia conflict of 1993, Baluevsky was assigned Head of Staff, First Deputy Commander of the Caucasus group of forces. He later analyzed that experience in the article “The Lessons of the Caucasus Wars” (“Uroki Kavkazskih Voyn”) published in Military History Magazine (Voenno-istoricheskiy zhurnal). 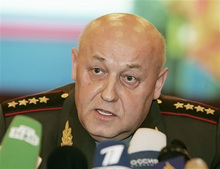 In June 1995 he was assigned Command Commander, then Deputy Chief of the Main Operational Directorate of the (now) Russian General Staff. In 1997 he was promoted to head the Main Operational Directorate and assigned Deputy Chief of he General Staff. In December that same year he was given the high rank of colonel-general. In 1999 he was awarded a special medal “for selflessness and valor” for organizing the Bosnia-Kosovo battle march of 12 June that year. His role in regulating the Yugoslavia conflict is also marked with the 1st class order of the Yugoslavian Star. And his efforts to destroy armed militant gangs in the Northern Caucasus have been rewarded with the 6th class ‘Order of Merit for the Motherland’.

The Russian President’s order of 27 July 2001 appointed Baluevsky First Deputy Chief of General Staff. In his new post, he took part in talks with NATO on a joint missile defense system plan; with his participation, a special working group for missile defense was created within the Alliance. Yury Baluevsky took part in preparing the SORT (Strategic Offensive Reduction Treaty, or Moscow Treaty), signed in May 2002. In the General Staff, he had a reputation as a man who didn’t consider the US and NATO enemies. He was also considered the “man in the know” on Georgian affairs. At the same time, Baluevsky was one of the main developers of a military reform in Russia, which focused primarily on management modernization. He has also published several articles on war theory and war history.

In December 2005, Yury Baluevsky announced publicly that in January 2007, when he would reach the age of 60 (which is the retirement age for men in Russia), he would retire from his post. But on December 30, 2006, President Putin prolonged his term of service for three more years –until January 2010.

On 3 June 2008 Yury Baluevsky left the post of the Chief of General Staff and was appointed Deputy Secretary of Russia’s Security Council.

Yury Baluevsky is a member of the Vologda Region descendants’ community in Moscow. He is married and has two adult children and a granddaughter. In his youth, Baluevsky was an avid sportsman, fond of mountain skiing and biathlon. At present, his interests include swimming, drawing in watercolors, and poetry – which he even writes himself.