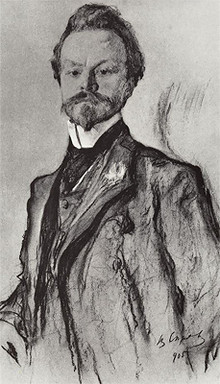 Konstantin Balmont was a Russian poet, critic and translator. He was one of the first symbolist poets of the Silver Age of Russian literature.

Balmont was born on June 15, 1867 in the village of Gumnishchi, near the city of Vladimir, into the family of a nobleman. His childhood was typical for the son of a country landlord. He wrote in his autobiography, “My best teachers of poetry were our estate, the orchard, the creeks, the swamps, the rustling of leaves, the butterflies, the birds and the sunrises.”

Like hundreds of other boys of his generation, Balmont caught the rebellious and revolutionary spirit of the times. In 1884 he was expelled from his gymnasium for being part of a revolutionary group. He finished the course two years later in Vladimir and then entering the Law Faculty of the Moscow University.

The free student atmosphere of the university only nurtured his rebellion; he took part in a student riot and soon after was expelled. A little while later he was restored back to his studies, but never finished the law course – he quit university in 1889 in favor of literature.

He wrote that any knowledge of history, philosophy, literature and philology he possessed he owed to self-education. He followed the example of his elder brother, who was obsessed with philosophy. Unfortunately his brother went mad and died at the age of 23.

As for the major influences in his life, Balmont wrote: “It is hard to single out experiences that shaped my life, but I will try. The reading of “Crime and Punishment” when I was 16, and then the “Brothers  Karamazov” at 17. The latter book gave me more than any other book in the world. My first marriage (when I was 21, which ended in divorce five years later), my second marriage (when I was 28). The suicides of several of my friends when I was young. My own suicide attempt (age 22), when I threw myself out of the 3rd storey window on to the rocks (I ended up with multiple fractures and years of being bedridden, which resulted in an unprecedented revival of my mind and will to live. Writing poems (first at the age of nine, then at 17 and 21) and traveling through Europe (I was especially impressed by England, Spain and Italy).

His suicide attempt left him with a life-long limp, something that became one of his trademarks. It appears Balmont was genetically inclined towards mental illness. It started affecting him at a young age and had an influence on him throughout his life. Arguably, some historians and biographers say that Balmont partly owed his genius to his mental instability.

The new voice of the Silver Age

Balmont’s debut as a poet coincided with many misfortunes. No magazines wanted to publish his poetry for several years. Finally he took matters into his own hands and published his own book of poetry in 1890. It had no success whatsoever – the book wasn’t even liked by Balmont’s family and friends. He was so hurt by the public rejection that he destroyed practically the whole edition.

Instead of writing, Balmonst focused on translating foreign writers and poets. He possessed an amazing linguistic capacity, mastering over a dozen foreign languages. This allowed him to read European literature and translate it into Russian. He worked with Spanish and English poetry and translated the works of Poe, Ibsen, Calderon, Whitman, as well as Armenian and Georgian poets. In 1893, he published the full works of Percy Shelly in Russian. He worked with many other languages, including Baltic and Slavic languages, Indian and Sanskrit.

Translating paid off much more than writing – Balmont’s translations of Edgar Allen Poe were published in virtually every Russian magazine. This gave him the courage to publish his own works once again. “Under Northern Skies” in 1894 followed by “Silence” in 1898 finally brought him the recognition and fame he had sought for so long. Besides the obvious content, Balmont’s symbolist poetry carried a hidden message, expressed through hints and melodious rhythms. He became the impressionist of poetry, his world made of fine observations and fragile sentiments.

At the turn of the century Balmont reached the height of his career. The books "Let Us Be Like the Sun" (1903) and "Love Alone" (1903) represent Balmont at his finest. He was at the top of his writing game, extremely popular with the public and practically ruled the world of Russian literature. He brought a moral and almost physical liberation from the old school of mournful poetry, which lamented the troubles of Russian life. His proud optimism and life-affirming pathos encouraged freedom from the restrictions imposed by society. Balmont’s poetry became the new philosophy marking the beginning of the Silver Ager of Russian literature. 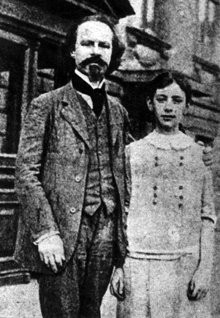 Konstantin Balmont and his daughter Mirra

In his later works Balmont changed his lyrical intonation to a more aggressive and somewhat rough shocking tone. Many of his contemporaries took this as a call for revolution. Balmont protested against unfairness in general, but his life-long rebellion let itself out in the highly controversial poem “Little Sultan.” In it Balmont criticized the Czar, earning himself the displeasure of the authorities, who had him exiled from Saint Petersburg and forbade him to live in any of Russia’s university cities.

Balmont left Russia and become a political émigré. He loved traveling and used this time to quench his thirst for adventure. It seemed the world hadn’t yet known a poet who spent so much time on the deck of a ship or looking out the window of a train. He traveled throughout Europe, Mexico, Egypt, Greece, South Africa, Australia and Oceania, New Zealand, Japan and India. His contemporaries said he had seen more countries than all other Russian writers combined.

In 1905 Balmont published another book of poems entitled “The Liturgy of Beauty.” His critics say the work marked Balmont’s decline as a poet – he began to repeat his old thoughts, images and techniques. His glorification of life no longer sounded convincing, as if it had been forced out of him.

In 1913, at the time of the 300-year anniversary of the Romanov Dynasty, all political émigrés were granted amnesty and Balmont was able to return to Russia. He welcomed the 1917 Bolshevik Revolution, but soon became terrified by the chaos and the Civil War that followed. Most of all he could not agree with the new policy aimed at everything massive and the suppression of individuality. He received a temporary visa and in 1920 he left Russia, never to return.

Latter years in exile and legacy

Balmont and his family settled in Paris. He wrote much of his works there – out of nearly 50 books, 22 were written while in exile. However, his best years as a poet were long gone, his verses indicated his further decline as a writer. He didn’t fit in with Russian immigrant society and isolated himself from it. However, he was very homesick and the only outlet to relieve his suffering was poetry, which he dedicated to his native country.

After 1930, the signs of his mental instability became more obvious and his condition was worsened by poverty, homesickness and most of all the loss of the writer’s touch. Balmont virtually went mad.

He died in Nazi-occupied France at the age of 79 and was buried in the small French town of Noisy-le-Grand. Up to this day the inscription on his grave reads: KONSTANTIN BALMONT, the RUSSIAN POET.

Balmont had an enormous influence on Russian literature and poetry, liberating it from the restrictions of the old school and bringing in new means of expression. He also had an amazing ability to play with sounds, arranging words in such a way that they expressed the mood of his poem in a musical way. He left 35 books of poems and 20 books of prose.

As a translator he also left a tremendous heritage for his contemporaries and the generations to come: five books of Edgar Allen Poe, three books of Percy Shelley, four books of Pedro Calderon. In total, his translations amount to some ten thousand printed pages.