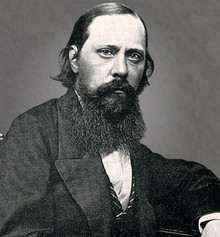 Mikhail Saltykov-Shchedrin (original surname Saltykov) was a Russian satirical writer. He spent a significant part of his life working for different government agencies. In his writings he illustrated and ridiculed corruption, overgrown bureaucracy, everyday absurdities and other flaws in the system he had seen up close and personal.

Saltykov-Shchedrin was born into a wealthy landowner’s family. He spent his childhood in his father’s manor near the town of Tver. His biographers speculate that he used his early impressions and observations as the basis for his book Poshekhonye in Old Times. This novel tells the story of a suburban landowner family, but the main idea of the narrative is serfdom in all its abominable horrors.

At the age of ten Saltykov-Shchedrin attended the Moscow Nobility Institute (a boarding school for noble children), and two years later he was transferred to the Lyceum in the St. Petersburg suburb of Tsarskoye Selo for being one of the best pupils. This Lyceum trained adolescents to become government officials, but its most famous graduate was a poet named Aleksandr Pushkin.

While studying at the Lyceum, the future satirist began to write poems, and received the nickname “the gloomy student” for his works. One of his verses was published in a popular magazine “Library for Reading”. However, Saltykov-Shchedrin was never satisfied with his work. He would soon give up poetry, but maintained his interest in literature. 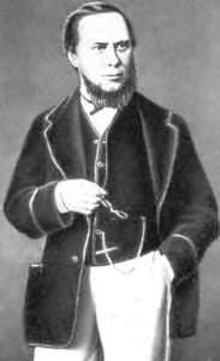 Portrait of Mikhail Saltykov-Shchedrin in 1860s

After graduating in 1844, Saltykov-Shchedrin got a job in the military minister’s office. Around this time he decided to try his luck as a literary critic and wrote several book reviews for the “Annals of the Fatherland” magazine. Working on these short witty anecdotes awoke Saltykov-Shchedrin’s own muse.

His early stories were inspired by the ideas of the French socialist philosophers Claude Saint-Simon and Charles Fourier. The shy and diffident main character of “The Contradiction” asks his acquaintance: “Why do some people ride in carriages, while you and me walk on foot through the mud?”; and a character from “The Complicated Case” answers him sarcastically: “Russia is a large and wealthy country, but people are silly – they keep on managing to die of hunger in a rich land”.

In those days, Nicholas I was ruling the country. His surname was Romanov, but the common people were sure that “rod” or “switch” would suit him better for his fierce rule: it was Nicolas I who imposed incredibly cruel punishments in the Russian military service. One of the things he is strongly associated with is the merciless censorship he introduced in 1848, right after the French revolution. By coincidence, the publishing of Saltykov-Shchedrin’s first works were censored because of his strict regulations.

The all-seeing eyes of the censors caught a glimpse of Saltykov-Shchedrin’s books. The books were banned and the author was exiled to the provincial town of Viatka. There he got a job in the governor’s office. According to his notes, his duties were monotonous and dull but he was glad to be useful for common people. Business trips allowed him to see the hidden sides of provincial life.

In 1855, Alexander II replaced Nicholas on the throne and started to implement liberal reforms. The country crossed the threshold towards a new life. Saltykov-Shchedrin was finally allowed to leave Viatka and was assigned to the Ministry of Internal Affairs.

In 1856, the “Russian Messenger” magazine began to publish Saltykov-Shchedrin’s “Provincial Essays”, a cycle of humorous and satirical stories about bureaucrats, their work, and everyday life. It was one of the first shoots of freedom of speech growing through the thawing soil of Nicholas’s regime. The readers appreciated the works of “court councilor Nikolai Shchedrin” (the essays were signed with this pen-name).

In 1860, Saltykov-Shchedrin became vice-governor of the city of Tver. His duties did not interfere with his writing. By 1862, he had published two volumes of collected stories. In many of them, the events take place in the fictional town Glupov (“Stupidville”), which served as a satirical reflection of the Russian Empire.

In 1862, Saltykov-Shchedrin retired and went to St Petersburg to write articles and reviews for “The Contemporary”, a literary magazine. Censorship had weakened, but was not gone, and it paid great attention to “The Contemporary” due to the radical views and ideas often expressed in the magazine’s pages. But living and working under such conditions proved harder than anticipated, so Saltykov-Shchedrin was compelled to interrupt his career as a journalist and writer and to temporarily return to the state service. In the following four years he published only one article.

In 1868, Saltykov-Shchedrin got a job in the “Annals of the Fatherland” and entered the most productive period of his life.  Every two or three years he published another book. His most significant works, “The History of a Town” and “The Golovlyov Family”, were created during this time.

“The Golovlyov Family” is a novel about an old noble family which falls apart before the reader’s eyes. The sparring between generations, the degradation and the inability to adapt to changes are the problems many Russian families faced in 1870’s. 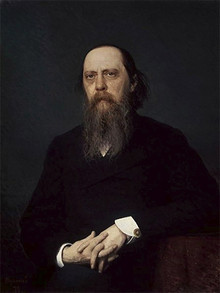 “The History of a Town” is a short novel about the aforementioned town of Glupov and its twenty one governors, which are caricatures of real Russian political figures. One of them loves to issue decrees like “Everyone who bakes a cake has to give a part of it to the major!” Another one steals food from the soldiers’ kitchen. A third, who uses only two phrases in his speech - “I’ll ruin you!” and “I can’t stand it!” – appears to have a phonograph instead of a brain, and the head of the fourth one is full of minced meat (which is why he is extremely afraid of mice). The last governor, which bears a certain resemblance to Nicholas I, attempts to turn the town into one large military settlement, to make the citizens wear uniforms and live in barracks. Contemporary Russians laugh, reading this book, but this laughter often tastes bitter.

Freedom of speech did not take root in the Russian soil so easily. In 1884, the “Annals of the Fatherland” was banned. For Saltykov-Shchedrin, who by that time had become the main editor of the magazine, it was a grief he would never recover from. His health was seriously undermined by this experience. He spent the last years of his life suffering from excruciating pain, but he did not give up writing.

In 1889, Saltykov-Shchedrin died and was buried in St. Petersburg, in the Volkov cemetery.