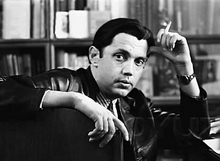 The 1960s saw an unprecedented poetry boom. This was the time of a political "Thaw", with thousands of young people flooding the halls of the Polytechnical Museum to hear poets Robert Rozhdestvensky, Bella Akhmadulina, Evgeny Yevtushenko.

Many remember Rozhdestvensky reciting his poems in a soft, yet powerful voice that mesmerized the listeners. Rozhdestvensky was a public man in the true sense of the word. He traveled a lot around Russia, meeting all sorts of people and versifying his life experience, all he saw and felt, in numerous poems.

Robert Rozhdestvensky was born in the village of Kosikha in the Altay Region, in the family of NKVD member Stanislav Petkevich. Robert didn’t remember much about his father as his parents divorced in 1937. His father died in 1945. Robert lived in Omsk till the age of 13, part of which time he spent with his grandmother and other relatives, since his parents were recruited to the war front. 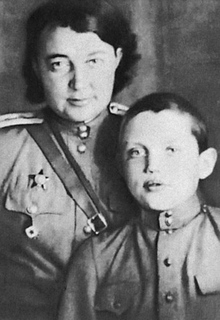 After the war his mother remarried, gave Robert his stepfather's last name, and they moved to the Republic of Karelia. In late June, 1941, Robert, barely eight years old, wrote his first poem. His first adult publications appeared in a Petrozavodsk newspaper in 1950. Though Robert aspired to enter the Moscow Literature Institute, he did not succeed in his first attempt and had to stay at the history and philosophy department of the Petrozavodsk University for a year. When he finally enrolled in the Moscow Institute he moved to the capital and published his first collection Flags of Spring in Karelia. His next two collections were called  The Test and My Love, both in 1956.

After Khrushchev's overthrow and Brezhnev assuming power, Rozhdestvensky became a senior member of the board of the USSR Union of Writers. In 1971, he was elected a member of the Secretariat of the Union, a powerful group which decided who should be published and who should not. In 1972 he was awarded the Lenin Komsomol Prize for young Communists, at the age of 40. He became a member of the Communist Party in 1977 and in 1979 received a Lenin Prize.

Rozhdestvensky's two-volume Selected Works were published in 1979 and his three-volume Complete Works in 1985. At one time he had his own program, Documentary screen, on Soviet television, dedicated to official propaganda against the West. In 1964, he was part of a group of Soviet artists who visited the United States. While at Yale University, he was criticized by a faculty member as an anti-American writer over a poem that implies the Americans might have helped the Nazis against Russia during World War II.

Rozhdestvensky also lived a very busy social life, being a senior member of the Soviet Committee for the Defense of Peace, financed by the Soviet government, and of the World Peace Council, on whose behalf he often traveled abroad. He was also chairman of various literary committees, and a member of the Moscow City Council. He lived with his wife, a literary critic, and two daughters in an apartment at 9 Gorky Street, a building where the Soviet elite lived and still live.

As a cultural emissary of the Soviet government abroad during Brezhnev's, Andropov's, and Chernenko's times in office, Rozhdestvensky used to write poems on political events or on space flights for the Soviet newspapers.

Rozhdestvensky will be remembered as a noteworthy poet of the liberal Soviet 1960s. In later life he was seen in public accompanied by leading cultural figures, and had a reputation as an outstanding Russian poet in favor of democracy.

Many of his poems were set to music and became popular songs, and although he never conceived them as such, one can feel music in every line he wrote.

Rozhdestvensky died from a heart attack in 1994 and is buried in the village of Peredelkino, a Soviet artists' resort.