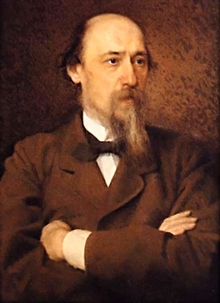 Nikolay Nekrasov, one of Russian poetry's most eloquent voices, became a successful publisher and author of some of the most mellifluent verses about women. Nekrasov, being the most influential literary entrepreneur of the day, assembled works ranging from ethnography to fiction to literary criticism, all written by leading authors and thinkers of the time. He is also well remembered as the long-standing publisher of the almanac, “Sovremennik” (The Contemporary) from 1846 to 1866. The journal was shut down by the government in connection with the arrest of its radical editor Chernyshevsky.

Nekrasov was born into the family of a petty Russian officer. His mother, Aleksandra Zakrevska, was from Warsaw and belonged to the Polish gentry. She was well-educated and her parents were against her marriage to a poor and uneducated officer. Their marriage was not a happy one.

Nikolay was abused by his tyrannical father. His father’s drunken rages against both his serfs and his wife determined the subject matter of Nekrasov's major poems—a verse portrayal of the plight of the Russian peasant, using his language and ideas. Thanks to his mother's love and support, young Nekrasov managed to survive through the traumatic experiences of his childhood and youth. Nekrasov admired his mother and expressed his love and empathy to all women through his poetry. As he grew up on his father's estate, Greshnevo, in the Yaroslavl province, near the banks of the Volga River, he was also able to observe the hard labor of the Russian barge haulers. 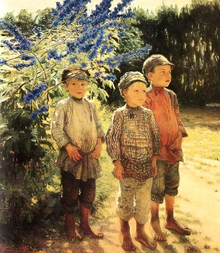 Again I'm in the country, once again!
I hunt, write verses, and am free from care;
Yesterday, tired with tramping through the swamps,
I strayed into the barn and slumbered there.

When I awakened, through the barn's wide cracks
The beams of a rejoicing sun shone in.
A dove is cooing; flying o'er the roof,
I hear the young rooks caw, with joyous din.

Another bird is flitting through the air;
I know it by its shadow for a crow.
Hark! there is whispering! All along a crack
Attentive eyes are gazing, in a row.

As flowers grow all commingled in the fields,
Were mingled eyes of gray, of brown, of blue.
How full they were of freedom and repose,
Of soft caressing, and of goodness, too!

The look in a child's eyes I always know,
And dearly love.—Thought faded from my brain;
A sense of something holy filled my soul.
Hush, listen! There is whispering again!

Nekrasov was a poor student, reaching only the fifth grade at his local gymnasium. In 1838 his father, bent on a military career for his son, sent the 16-year-old to St. Petersburg for officer training. Nekrasov quickly lost interest in the military academy and concentrated on studying for the university entrance exams. Though failing to score high enough to be admitted as a full time student, he was able to attend classes, which he did from 1839 to 1841. After Nekrasov quit the army in favor of his studies, his father stopped sending him money. He lived in extreme want, briefly living in a homeless shelter.

Shortly thereafter Nekrasov authored his first collection of poetry, “Dreams and Sounds,” published under the penname “N. N.” Though the poet Vasily Zhukovsky expressed a favorable opinion of the beginner's work, it was promptly dismissed as romantic doggerel by Vissarion Belinsky, the most important Russian literary critic of the first half of 19th century, in the literary journal Notes of the Fatherland. 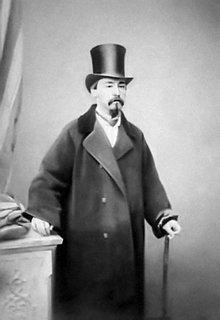 As his first book of poetry was met with harsh criticism, Nekrasov personally went to the booksellers and removed all the copies of the failed collection. Ironically, Nekrasov joined the staff of Notes of the Fatherland with Belinsky in the early 1840s. He soon became close friends with the critic. Nekrasov was promoted to an editing position. From 1843-46 Nekrasov edited various anthologies for the journal, one of which, "A Petersburg Collection," included Dostoevsky's first novel, “Poor Folk.” At the end of 1846, Nekrasov acquired "Sovremennik" magazine. Much of the staff from Notes of the Fatherland, including Belinksy, abandoned Pyotr Krayevsky's journal for Nekrasov's. Before his death, Belinsky granted Nekrasov rights to publish various articles and other material originally planned for an almanac, to be called The Leviathan.

From 1846-1866 Nekrasov was the publisher of The Contemporary and made it one the most reputable magazines of 19th century Russia. In it Nekrasov published his own novels and poems, as well as the works of Ivan Turgenev, Leo Tolstoy, and other Russian writers. In 1866 "Sovremennik" was shut down by the Tsar's government in connection with the political prosecution of its editor, Nikolay Chernyshevsky. After that Nekrasov became an independent writer and entered the most productive period in his life. His best poems, such as "Russian Women" (1871-72), "Who's Happy in Russia?" (1873-76), and "Last Songs" (1877), stand out among 19th century Russian poetry. Nekrasov was praised by Fyodor Dostoyevsky, who compared him to Mikhail Lermontov and Aleksandr Pushkin. Together with Stanitsky, Nekrasov published two very long novels: “Three Countries of the World” and “Dead Lake.”

Nekrasov's most important work was “Who’s Happy in Russia?” (1873-1876). It tells the story of seven peasants who set out to ask various elements of the rural population if they are happy, to which the answer is never satisfactory. 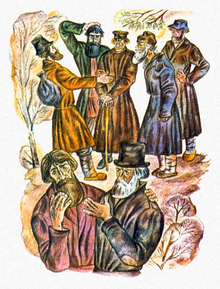 O'er thy plains, my native country,
In the years now past away,
Never did I ride with feelings
Such as fill my soul to-day!

In its mother's arms reposing,
Lo! a peasant's child I see,
And my heart is stirred to gladness
By a thought most dear to me.

You were born in times auspicious,
Child, into this world below;
With God's help, in days before you,
Pain and grief you shall not know.

With the light of youth around you,
Ere you enter on the strife,
Freely and with none to hinder
You shall choose your path in life.

You shall, if you so desire it,
Be a peasant evermore;
If you have the power within you,
Like an eagle you shall soar.

But, it may be, many errors
Lurk in fancies such as these,
For man's intellect is subtle,
Swayed and influenced with ease.

And, beside the snares of old time
Spread the peasants' feet before,
Well I know designing people
Have invented many more.

Yes, but for the folk to break them
It no harder task will be.
Then, O Muse, with hope and gladness
Hail the dawn of liberty! 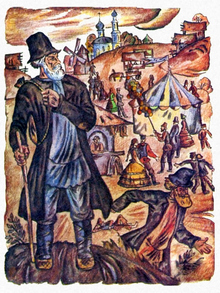 By the middle of the 1850s Nekrasov had become seriously ill.

He left Russia for Italy to recover. It was around this time that Chernyshevsky and Nikolay Dobrolyubov, two of the most radical and unabashedly revolutionary writers of the time, became the major critics for the magazine. Nekrasov was attacked by his old friends for allowing his magazine to become the vehicle for Chernyshevsky's sloppy and often poorly written broadside attacks on polite Russian society. By 1860 Ivan Turgenev, the naysayer of nihilism, refused to have any more of his work published in the journal.

After the closure of The Contemporary in 1866, Nekrasov obtained ownership of Notes of the Fatherland from his old enemy Kraevsky. He achieved new success with the journal.

In 1877 Nekrasov, never very healthy, became ill for the last time. He then composed his “Last Songs,” filled with the agony of the shriveled and now dying poet.

The tomb of Nikolay Nekrasov is at the Novodevichy Cemetery in Moscow. Despite biting frost, his funeral was attended by many. Dostoevsky gave the keynote eulogy, noting that Nekrasov was the greatest Russian poet since Pushkin and Lermontov. A section of the crowd, youthful followers of Chernyshevsky who connected the verse of the deceased poet with the revolutionary cause chanted "No, greater!"….