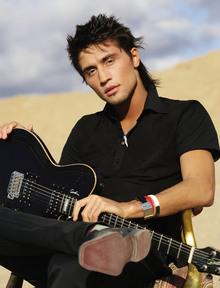 
Dima Bilan was born in Karachaevo-Cherkessia in Southern Russia. His born-given name was Viktor Belan. The difference between the real and stage name caused much of discussions during the past years, as some music organisations wanted to forbid the singer to perform under his stage name – Bilan – claiming their rights for it. There have been several hearings in courts considering this name issue. To solve the question, the singer simply changed his passport and officially became Dima Bilan – as millions of his fans know him.


Bilan spent his childhood in the Southern Russia, where he went to an ordinary music school and won several prizes for young talents, including an award for the “Young voices of Caucasus”.

Enjoying performing on stage and public attention, Dima Bilan moved to the Russian capital to study at a music academy. He was successful enough to enter one of the country's top music schools, the state musical college named after the Gnessins, joining the faculty of the classical vocal. 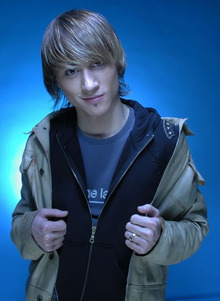 It wasn’t an easy time for the future heart-breaker of millions of girls. Studying at day-time and rehearsing at nights, he worked as a shop assistant for his living. Selling clothes, he was dreaming of a career on stage, but not on an opera one. He could easily perform complicated classical compositions, but realized that theatre was not for him, and was listening to Whitney Houston a lot, dreaming of a pop singer career.


Later Diane Warren, who has worked with Whitney Houston (as well as with Celine Dion, Ricky Martin and Aerosmith to name just a few) will write several songs for Bilan (featured on his second studio album, “Between the sky and heaven”).

Under the producer's eye


While studying in the Gnessins school Bilan was lucky to meet a prominent Russian musical producer Yury Aizenshpis . It was one of Moscow's nights out with a concert of already popular musicians, and the future singer was so obsessed with the idea to become one of them, he was spinning around the producer, trying to attract his attention, singing. Having a professional sense and a practiced eye Aizenshpis at once saw a future pop star in the young man.

The manager, who had already made popular many artists, put a lot of money and effort 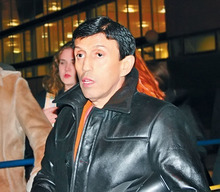 in his new project. “The role which Yury has played in my life can't be described in just a few words. – said Bilan in his interview to RT – It was a very large part of my life and now it's deep inside me, in my heart and in my consciousness. I can't pinpoint it exactly, he was more than a producer, he became a second father to me.”

Bilan was not an immediate success. In 2002, the singer won only fourth prize in his first competition – the contest of young artists entitled “The New Wave”, taking place in Latvia. His debut album, The Night Hooligan was released in 2003. Now Bilan boasts three studio albums, with dozens of songs frequently aired on radio and television, and many videos shot across the world, made by famous Russian directors, such as Fyodor Bondarchuk and Gosha Toidze. Few personalities in Russian show biz could believe it when the singer was introduced to the Russian stage.

And Bilan's first international performance probably happened by chance. In 2004, while 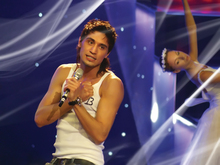 shooting a video for his song Between the Sky and Heaven in Venice the singer was improvising just for fun. And then suddenly realised that a crowd of tourists had gathered around him, fascinated. It was decided to include this piece in the video.


Many of Bilan’s music videos feature passionate scenes. And after each of them premieres on TV, rumours about the singer’s relationship with a model, featured in the video, start spreading. And while some believed it (and then, according to those, the singer would have been married for about six times by now), others are more skeptical about the models, claiming Bilan to be obviously straight but secretly gay.


It was even said he denied an offer from the designer duo Dolce and Gabbana to take part in their brand’s advertising campaign, as all the male models accepting it are believed to be homosexual. 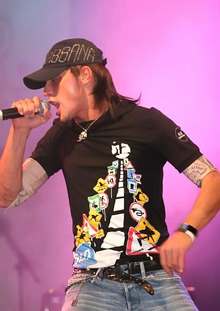 Those who voted for Dima Bilan at the Eurovision song contest in 2008 probably cared less about this yellow-press stuff. The singer undoubtedly has a strong voice, which brought him victory at the contest and the contest itself to Russia (every year Eurovision changes its stage, being held in the country, where the winner of the previous year comes from).


It was the singer’s second try at the show. In 2006 he took Eurovision’s second place with the song Never Let You Go (which was a big achievement by that time, with only one singer from Russia, Alsou, getting up to such a high position four years before Bilan).

His Believe hit was luckier.


Bilan’s first producer (Yury Aizenshpis), who has brought him on the big stage, believed in his protégé. But he sadly died in September 2005, just one day before Bilan won the Best Russian Artist award at MTV Russia music awards (RMA).


Many more accolades followed. Now the singer boasts several RMA awards for the best song, best artist, best Russian act (having got which he not once represented Russia at MTV Europe awards), and dozens of various awards for best-selling albums, for his style, etc.


Dima Bilan’s hobbies include collecting belts and taking pictures. Though of course he doesn't have much time for that. He’s touring Europe and America, promoting his songs to a wider audience. Now producer Yana Rudkovskaya is in charge of the singer.


They’re not in a relationship, as many might have expected, as Bilan has introduced Russian model Lena Kuletskaya to be his girlfriend. Before the 2008 Eurovision contest he even promised to marry her in case he wins… The singer got the top prize, but hasn’t fulfilled his promise yet. As he says, he’s too busy with the concerts…