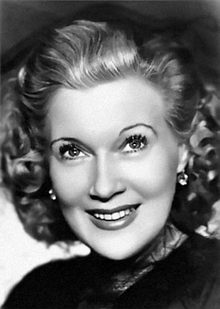 Lyubov Orlova is the most glamorous and popular actress of Soviet cinema.

Lyubov was born in Zvenigorod, just outside of Moscow. The parents of the future movie star, Petr Orlov and Evgeniya Suhotina, were both descendants of an old Russian aristocratic family. They wanted Lyubov to become a professional pianist and at seven enrolled her in a music school. Legend has it that at age ten she had a chance to perform in front of a family friend, the famous Russian opera singer Fyodor Chalyapin in a children’s theater. At the end of her performance Chalyapin took Lyubov into his arms and said: “This girl will be a famous actress!” It would take 25 years, but his prediction was to come true.

At 17 Orlova enrolled in a Moscow conservatory to study grand piano. In three years she moved to the ballet faculty of the Moscow Theatrical Technical Secondary School and in 1926 became a member of the Musical Theater under the direction of Vladimir Nemirovich-Danchenko. Orlova got married young in 1926 to 29-year-old Andrey Berzin, a successful political official. Berzin impressed her parents - he was attractive and had a respectable job - and they rushed their wedding. Orlova was attached to her husband and hoped for a long lasting life together, but their union was short and unhappy; Berzin was arrested in 1930 and sent to jail for a long term. Their unfortunate separation did not break Orlova’s spirit and maybe even vitalized her desire to improve her acting and creative efforts. Being a chorus and ballet actress, she mostly had episodic parts, but even then her musical and drama talent was noticed by many, and each year she was one step closer to becoming a star. She soon fell in love again with an Austrian businessman who was mesmerized by the beautiful and talented actress.

During that time she felt that theater wasn’t enough and decided that she wanted to be in movies. However, her first efforts came to disappointment. This is what she had to say about it herself: “In the film studio I stood in a long queue: a selection of young performers was announced for the latest picture. Barely hiding my shyness, I appeared in front of the director – a person with decisive and omniscient eyes. When his examining and piercing gaze came over me, I felt like I was oblate between the glasses of a microscope.
- What is that you have? - the director asked, pointing at my nose.
I quickly looked in the mirror and saw a small beauty spot, about which I had completely forgotten - it never bothered me.
- Be…beauty spot, - I babbled.
- No good! – The director said blankly.
- But…- I tried to object, but he cut me off:
- I know, I know! You act in theater, and the beauty mark is not in your way. Cinema – is not theater. In cinema everything is in the way. And this you have to understand!
I only understood one thing: I will never be in a movie, and this is why I needed to quickly leave the studio and never show up there again. And I swore to myself never to do this again.”

Fortunately Orlova broke her vow. In 1934 director Boris Yurtsev invited her to take a part in his movie and she accepted. Other film roles followed but they did not bring her the same success as her theater career. Her real cinema breakthrough came after the movie ‘Jolly Fellows’ was released, produced by Grigory Aleksandrov. During the filming her romance with Aleksandrov developed and soon after the filming ended they were married. 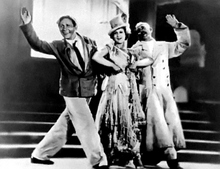 One movie after another directed by Aleksandrov with Orlova as the main star was released and every one of them became a hit including “Circus” and “Volga-Volga.” After a triumphant success Orlova was personally awarded by Stalin, who particularly liked the talented actress. He was a devoted fan, and especially liked the musical comedy “Volga-Volga” and knew all the funny scenes by heart. Throughout her career Orlova received titles given by Stalin for her cinematic works including ‘People’s Artist of the USSR’ in 1950.

Despite that she never had a kissing scene in any movie she was in, Orlova is sometimes referred to as a sex symbol of Soviet cinema. Compared to other movie stars in that period, Orlova’s look was thought by many to be very ‘Hollywood’; she was musical, beautiful with high cheekbones and an irresistible white smile, her height was 1m 58cm and she had a 43cm waist. Throughout her entire career, Orlova fought to stay looking beautiful and young on the screen. Over the years it turned into a nearly compulsive sickness. She always hid her true age. When in 1972 she was turning 70, she personally asked high officials that on no account should her age be revealed, and that is why not a single newspaper, magazine or television show mentioned her in that year. Orlova even had plastic surgeries and was probably the first Soviet actress to do so. From her trips overseas, she had brought back not only rare (for the time) shoes with transparent heels, but also special face and hand creams.

In the later stages of her life Orlova stopped taking movie roles but continued her remarkable acting career at the Mossovet Theater. But her health was declining and she ended up in hospital due to pains in her kidneys. Orlova thought she had kidney stones but the real diagnosis was much worse - doctors had discovered cancer. Aleksandrov asked them not to say anything to his wife telling them to “let her think she has stones.” Orlova died on 26 January 1975. In 1983 her husband made a documentary dedicated to her memory and died that same year. They are buried next to each other at the Novodevichy Cemetery in Moscow.