Smekalka is the ability to cope with a difficult situation or crisis and act effectively; the skill not to lose courage in an emergency, especially one threatening someone’s life, and to make a correct and, importantly, quick decision on how to behave; resourcefulness, quick-wittedness, nouse.

The word smekalka comes from the Russian verb “smekat’” which means “to quickly understand what is happening; to see the point of the problem, of a predicament; to grasp the meaning of something very quickly”.

Smekalka is viewed by Russians themselves as their national trait, and a priceless one at that. Traditional Russian folklore glorifies it. In folk tales, good characters are always characterized as having a lot of smekalka - something that distinguishes them from the bad characters, who are dull slowcoaches - and helps them overcome difficulties without losing face. 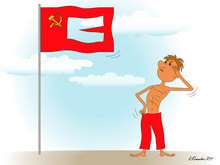 Russian proverbs say a soldier armed with smekalka is unconquerable, or strength and smekalka are all you need in a war. And it’s not by chance that smekalka is often mentioned in the context of war: military smekalka is a matter of special pride and respect, as it can save lives. Great and miraculous victories by honored Russian commanders such as Aleksandr Nevsky, in the 1242 Battle of the Ice, also known as the Battle of Lake Peipus; Dmitry Donskoy ’s triumph at the Battle of Kulikovo in 1380, or Aleksandr Suvorov ’s numerous wins, are down to their exceptional talent, special military wit, or smekalka.

But in peaceful life, smekalka is just as useful. It acquires a slightly different meaning when arms are laid down: the ability to get what you want using the means handy, an ingenious mind.

In the 1930s, the Soviet car magazine At the Wheel ran a column called Driver Smekalka. At that time there were no special car services, and the column was created to teach ordinary Soviet drivers to repair and upgrade the country’s first Fords.