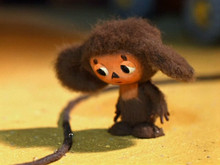 Cheburashka is a small brown-haired animal famous for his huge ears and big eyes. He’s an entirely fictitious character from a 1965 children’s book by Russian writer Eduard Uspensky. Although some children still think they can see Cheburashka in a zoo.

In 1969 Cheburashka played the main role in the first episode of a cartoon series by Soyuzmultfil, Russia’s major animated film studio, about … himself and his friends.

A journey that changed his life

Cheburashka used to live in a thick tropical forest until one day he crossed an ocean, or even two, in a box of oranges and found himself in a big city: he had climbed inside the box to take breakfast but after eating two fruits, he felt tired and fell asleep. He didn’t notice when the boxes were nailed shut and loaded onto a ship.

According to the book, Cheburashka’s name comes from the Russian verb “cheburakhnutsya” meaning “to topple.” For example, after he ate too many oranges during his trip in the box and his legs became numb, he couldn’t stand and toppled over every time.

The word Cheburashka is also used to indicate a cork-tumbler or a tilting doll. 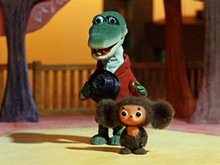 In the big city Cheburashka felt lonely until one day he made two friends.

Krokodil Gena, or Gena the Crocodile, a 50-year-old young Crocodile (the crocs live up to 300 years). He’s been working in a local Zoo as … Crocodile. He spent all his spare time reading books, newspapers and all kind of encyclopedias (Russopedia maybe?) or playing oaths and crosses with himself. He also liked smoking pipes and good clothing – especially suits, coats and hats. On his birthday he sang a song that became a special birthday song in Russia.

Cheburashka’s second friend was Galya, a little girl and a promising actress in a local children’s theater.

The friends gathered every evening to chat and take coffee. They set up a Friendship House – a kind of friend’s exchange, to help everyone looking for friends.

Starukha Shapoklyak, or Old Lady Shapoklyak, named after an ancient opera hat “shapoklyak,” from French chapeau claque, is the main antagonist of the three friends. A tall and lean old woman, she “collects evil and bad deeds” claiming “good acts will never make you famous.” Her best friend is an ugly rat named Lariska who she keeps in her handbag.

Life on the screen and popularity

From 1969 to 1984 four cartoon episodes appeared - “Cheburashka,” “Gena the Croc,” “Shapoklyak” and “Cheburashka Goes to School.”

Once the first episode hit the screen, Cheburashka gained popularity across the Soviet Union. He became a staple of Russian cartoons and the main character of many anecdotes and jokes. Millions of Cheburaskka toys spread all over the USSR with at least one in each Soviet family. 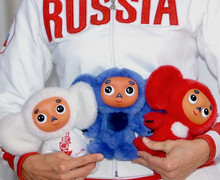 The world’s Che-gemony or Russia Pokemon

Once Cheburashka’s cartoon was shown in 15 cinemas across Japan and watched by about 700 thousand Japanese, Che became a super star in the country of the Rising Sun too, where he is known as Chebi.

A big Tokyo production studio purchased the right to use Cheburashka’s image to create a new 50-episode cartoon about Chebi’s adventures.

During the first decade of the current century, a number of cultural and social projects appeared in Russia inspired by Cheburashka’s image. One of them - a charity event to support orphans called “Cheburashka’s Birthday” - takes place every August.

In 2005 a monument to Cheburashka, Gena and Shapoklyak was erected in the Moscow Region. In 2008, in one of Moscow’s kindergartens, the Cheburashka Museum opened its doors to young visitors. Among the displays – Eduard Uspensky’s typewriter, the very one he used to create Cheburashka’s story.

The word Cheburashka is also used for objects that somehow resemble Che. For example, the L-410 and the An-72 airplanes – with their ear-like engines.

Cheburashka is also the name for 0.33 or half-liter bottles – in which, in the USSR, lemonade of the same name was sold.