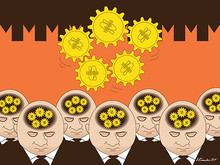 Contrary to what a native English speaker might think, the "semi" in the beginning of this word does not mean "half". It comes from the Russian word for "seven", and was coined in the turbulent 1990's by a journalist writing about the current state of  Russian affairs.

Even to a Russian speaker who isn't familiar with the country's history the word sounds strange. That's because its origins date back to the 17th century, when a group of Russian aristocrats, known as the boyars, overthrew Tsar Vasily the Fourth and established a ruling party of 7 men. Centuries later, the term was morphed with the current "aristocrats" of the times - the financiers.

To add to the confusion, "Russia's 7" were actually 9 people, because different names featured in the group at different times. But the core remained the same: a group of powerful money men, who together controlled much of the country's political and economic situation.

According to different sources, the movers and shakers in the Russian 1990s were:

Boris Berezovsky  (then owner or LogoVAZ)

Mikhail Khodorkovsky (then owner of the Menatep Bank)

Vladimir Gusinsky (of the Media Most holding)

Most sources agree on the first 7 names, and because it fit the collective term "semibankirschina", or "7 bankers", those are the names most often referenced when researching the word.

Despite the fact that all these men had different interests, and many were in direct competition, they unofficially came together to make sure the current President, Boris Yeltsin, was re-elected in 1996. Legend has it that Yeltsin met with these men before his campaign began, and offered them various future privileges in return for their support and help in the presidential race. One of the so-called magnificent seven, Boris Berezovsky, even gave an interview to the Financial Times, claiming that he and 6 others controlled no less than 50 percent of the country's economy and had the opportunity to influence its policies. 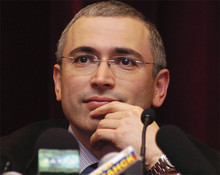 President Yeltsin did need all the help he could get in the 1996 election. When campaigning began, his popularity was at an all-time low, and people did not believe he could continue to be a leader, both due to health issues and political decisions. Because part of the 7-man rescue team had direct control over national media outlets, Yeltsin allowed them to acquire majority stakes in some of the country's most valuable state-owned assets in return for guaranteed favorable media coverage on TV and in print. The media painted bleak pictures of a Russia without Yeltsin, calling it a "return to totalitarianism". The bankers stoked the fire even further by playing up rumors of a civil war, should a Communist candidate win the race.

Because the aforementioned Communist candidate (who still remains the only Communist candidate to date, running - and losing - every election) had no such financial resources, his popularity quickly began to fade, and when election day came, Yeltsin won with 53.8 percent of the votes.

Game, set and match for the group of seven - or so they thought. 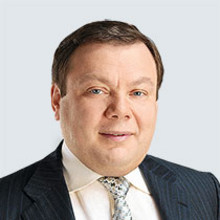 True to the phrase, very few of the magnificent seven are still in play. Boris Berezovsky and Vladimir Gusinsky are personae non grata in Russia, with the former actually convicted of several crimes in absentia. Gusinsky - who created the country's first independent TV channel NTV - moved abroad and started a new media company, most well known for the radio station Ekho Moskvy (Echo of Moscow). Mikhail Khodorkovsky is perhaps the country's most famous prisoner, having been found guilty of fraud, tax evasion and money laundering.  Smolensky still owns a large business - but without any political influence, and Vinogradov died in 2008. Only 2 men can still pack a mean punch - Mikhail Friedman and Vladimir Potanin.

Friedman still co-owns the Alfa Group Consortium and TNK-BP, as well as being a member of the Public Chamber and the Russian Union of Industrialists and Entrepreneurs. Forbes magazine continuously lists him as one of Russia's richest men – Friedman is ranked the 42nd richest billionaire on the planet.

Vladimir Potanin is not far off in that list, as the 62nd richest man on Earth. He also retains an influential financial and political position in modern Russia, as the founder and owner of one of the country's largest holding companies, Interros.