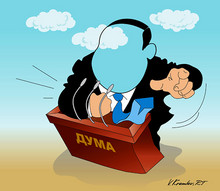 When the USSR collapsed in 1991 many hoped that a new legislative assembly would replace the puppet parliament of the USSR and usher in an era of openness and democracy. Ironically, throughout the 1990’s it is that exact body that proved to be a major obstacle to political reform in the country.

When the Soviet Union dissolved into 15 different states, and Russia, formerly its largest constituent republic became independent, the only legislative assembly it had was the one that was still elected under Communist rule a year earlier. Although the elections to what was then called the Congress of People’s Deputies in 1990 were semi-free, and brought to public attention many opposition politicians, parties other than the Communists were not allowed to campaign, and the Communist Party dominated, winning over 80 per cent of the vote (opposition politicians had to stand as “independents”).

By the end of 1991, the Communist Party was officially banned, and while many of the members had put away their membership cards, their views had not changed. Although it was unlikely to have the views of the Russian population proportionately represented at large (after all Boris Yeltsin confidently won the Presidential election in 1991), the Congress immediately became a focal point of opposition to the new President, an avowed anti-Communist.

The old Soviet Constitution was inadequate for new Russia, now ruled by competing political forces instead of the monolith of the Communist Party. It contradicted itself in some of the amendments that were made on the verge of the fall of the USSR, and it did not establish the division of power between the legislative and the executive branches. On the one hand, the Congress was officially the most powerful body in the country, on the other, all the effective instruments of government were placed in the hands of the President.

With the government controlled by the western, democracy and market-oriented Yeltsin, and the Assembly who viewed him as a political enemy, many members of which wanted the USSR back, deadlock ensued. The President was forced to rule by decree in 1991 and 1992, and while he initially enjoyed broad support, as the effects of unpopular economic reforms became apparent, dissenting voices (many inside the Congress) grew louder.

Things came to a head in December 1992, when the Congress refused to confirm the re-appointment of the liberal Prime Minister Egor Gaidar. In return, Boris Yeltsin stormed out, calling for a popular referendum to decide whether the country was behind him or the Congress.

After a speech by Yeltsin in which he appeared to suggest that he would suspend any of the power of parliament and rule alone until the referendum, the Congress tried to impeach Yeltsin, but failed when it was discovered that the President would not try to unconstitutionally monopolize power.

The national referendum in 1993 brought a narrow vote of confidence for Yeltsin. Encouraged by the popular mandate, Yeltsin drew up a new constitution, whereby the President would enjoy political supremacy. There was no chance that the Congress would accept even holding a referendum on the new constitution, knowing that by accepting, it would risk its very own existence.

In the meantime the temperature of the confrontation grew hotter. What was once an ideological debate spilled over into the realm of practical politics – with the President and the Congress appointing different officials for the same position, and even projecting a disunited front in international politics, such as the Congress recognizing the Ukrainian city of Sevastopol as Russian, causing Ukraine to lodge a complaint with the UN. Effectively, by the summer of 1993 Russia was in a state of dual power.

On September 21 Boris Yeltsin dismissed Congress, ahead of a proposed vote on the new Constitution, and an election for a new parliament.

In return, deputies gathered inside, and passed a resolution accusing Boris Yeltsin of violating the Сonstitution, and declaring that he was no longer President. Vice-President Aleksandr Rutskoy, a former Yeltsin ally who had changed allegiances over the course of the preceding two years, was declared acting President.

Electricity and water were then turned off in the Congress Hall, and the police and military surrounded the building colloquially known as the White House. Yeltsin and the Congress leader Ruslan Khasbulatov held several fruitless meetings, including those mediated by the Head of the Orthodox Church.

On October 3, 1993 Congress supporters broke through the police blockade. Rutskoy urged them to take the Kremlin and overthrow Yeltsin. Later the same night, gangs of radical paramilitaries, armed with iron bars and hand weapons captured the Mayor’s office, and led a march on the central television tower. Yeltsin declared a state of emergency. Eventually, the attacks were repelled, with dozens being killed.

Despite Rutskoy being a decorated general, the army stayed loyal to Yeltsin. The next day tanks lined up across the Congress building and began to shell it as television stations broadcast the footage live across the world. Special unit soldiers then successfully stormed the Congress, and although politicians were allowed to escape, casualties ran between several hundred and several thousands, many of whom were caught up in the crossfire.

Public surveys at the time predominantly blamed the Congress for the outbreak of violence. But whoever was right or wrong in the lead up to the conflict, the images of government tanks firing at the White House became a symbol of Russia’s nascent political system.