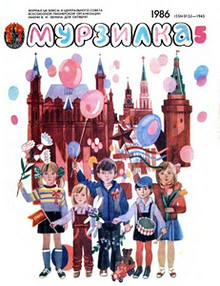 When you go to the website of this children’s magazine, you see instantly why it is so popular. The screen bursts with color as up pops a green field by a river. On it is a stout tree with a door in the trunk. To the left of the title is a smiling sun and clouds and birds float by to the moon which slumbers on the right. Boats chug past on a river and behind a three-headed fire breathing dragon, a little hedgehog carries an apple on its back into the tree. And from behind the tree pops the yellow-furred creature himself, Murzilka, wearing his famous red hat and scarf and holding a copy of the magazine.

If the front page is anything to go by, whoever enters (of course through the door in the tree) is in for quite an adventure!

Generations of Russians beam when you ask them about Murzilka. It has stood the test of time. First published in 1924 it has never missed an issue since and is still going strong. It was originally aimed at children passing from the Communist Young Octobrists organization on to the next step of the Pioneers, rather like a Soviet boy scouts. Today its target audience is the same at 6-12 years and it still serves the same purpose, to teach children reading and the love of literature and stories.

When one dives into the tree on the title page one enters the town of Murzilkagrad, with a central fountain made by a gurgling fish leading off onto ‘children’s fantasy street’, ‘fairytale street’,  ‘history prospect’ and a street for grown-ups so they don’t feel too left out either! 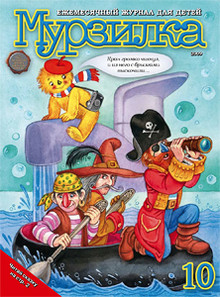 Murzilka the magazine is, and always was, a link between the wider world of literature and its young audience. It helps to teach children Russian, and brings them fairytales, poems, and stories for young readers. It also helps to educate young Russians in the natural world, science and technology and even presents them with its own mini art gallery!

It has helped launch the careers of many famous Soviet and Russian writers, with some of their first works printed there. There are currently over two hundred writers and painters contributing to the magazine.

The enduring symbol of the magazine is Murzilka himself. He was originally taken from a nineteenth century character of a little forest man, and later became a friendly dog who helped people in trouble. Then in 1937 the illustrator Aminadav Kanevsky created a creature with yellow fur who carried a camera over his shoulder and wore a red hat and a scarf. This is the Murzilka so many Russians adore today.

If any children are curious enough to ring up the magazine and ask for Murzilka, they may be lucky enough to be greeted by a magical little voice, reminding them that his magical world through the door in the tree past the three-headed dragon is not so far away!