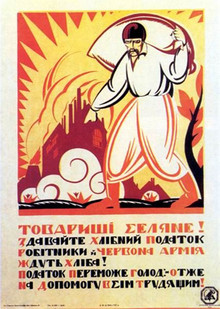 The word “prodrazvyorstka” translates as “surplus appropriation system”. It was a Russian governmental program which obligated all peasants to sell their crops to the state for fixed prices, leaving only a limited amount of goods for personal use. Prodrazvyorstka usually is associated with Soviet power, but the Bolsheviks were not the first to introduce it – they inherited this policy from their predecessors.

In 1914, The Russian Empire entered World War I. Peasants able to work were mobilized and horses from peasant households were confiscated for military purposes, so cultivation areas were reduced. Food prices shot up, and the country still needed to feed soldiers at the front line. In addition, in 1915-1916 crops failed, and hunger came to Russia, making authorities to establish a rationing system in cities.

To save the situation, the government brought in “razvyorstka”, a prototype of prodrazvyorstka. This new policy obligated every Russian region to surrender a determined amount of grain to the state for prices, which were lower than market prices. It was also stipulated that peasants could not be forced to sell bread, but only talked into doing it. In this form, razvyorstka was useless and was sabotaged.

In 1917, the February revolution came and the Provisional Government led the state. The war and crisis were not over, so extreme measures were taken: authorities established a government monopoly over the grain trade. Peasants were allowed to use only a predetermined amount of bread and forage they had produced, all surpluses were to be surrendered voluntarily or confiscated. This system was more thought through, but actually the Provisional Government was not powerful enough to execute it.

In October, 1917, the Provisional Government was overthrown by the Bolsheviks. Russia left World War I to be torn apart by civil war. The majority of cultivated areas were controlled by non-Bolshevik forces and others who just ignored governmental orders. Famine spread in the country and uprisings followed. When the Bolsheviks attempted to take the bread by force, the peasants who had just returned from the war shot back. 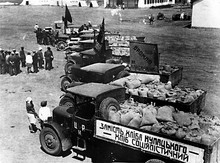 In 1919, “prodrazverstka” was adopted. Razvyorstka now applied only to grain, while this new policy made peasants surrender all other products also. Money went down in value, so the government was actually taking its part for free.  The word “surplus” lost its meaning – quite often collectors took all the products the peasants had.  The ones who hid their property from the state were arrested and often executed or exiled.

Prodrazvyorstka helped the Bolsheviks to win the civil war and to restore industry, but agriculture was completely destroyed by it. The majority of peasants lost motivation for work and thought about the government as their main enemy.

In 1921, prodrazvyorstka was replaced by tax system.