Created in the early 20th century, the music of the bayan has been heard drifting across Russian villages ever since.

The musical instrument was named after the mythical Russian bard Boyan, or Bayan, who may have existed in the 11th century court of Yaroslav the Wise. But its links to Russia’s ancient past end there.

Obviously Russian folk music had been around a while longer than the bayan. When it appeared many artists adapted folk music to play on it. This was part of the tradition started in the 19th century, which created so-called ‘folkloric’ music. This music wasn’t a copy of the original folk tune, but a deviation from its arrangement and style of play. Many in the west though, accepted it as truly Russian, which contributed to the decline of authentic traditional folk music. Still more of the bayan’s music was “fakeloric,” meaning it was merely based on the theme of folk music and wasn’t really traditional at all. This wasn’t necessarily a problem. As you will see below beautiful and original music was composed for the bayan in the 20th century. But remembering its recent arrival is a useful caution against taking that clichéd accordion sound heard in so many sweeping Russian stereotypical moments as having particularly deep roots in Russian culture. It doesn’t.

The bayan is however an instrument all of its own. It’s similar to an accordion but with unique differences in construction; it plays and sounds different than other accordions. Its tone is different from western accordions and its base sound is much fuller. 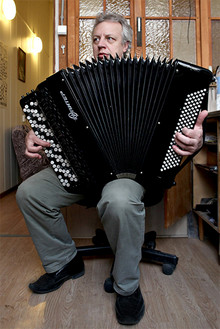 With its great range and tone the bayan is the instrument of choice for those musicians wanting to perform classical rather than folk music on what seems at first glance to be a purely folk instrument. Some Russian composers have created music for the bayan. Vladislav Zolotaryov in the late 1960s created music for the button accordion, which was widely recognized to have deeply enriched the instrument’s repertoire. Sofia Gubaidulina throughout her career from the late 1950s through to the present day has composed music that could be played on many different instruments, including the unique sounding bayan.

There is definitely a lot of Russian feeling in the bayan. This is its homeland and the place where some of its greatest music comes from. But its place in Russian culture, although cherished, is only a century old and isn’t particularly traditional. So when you hear its tones drifting across that archetypal Russian village, realize that it was Russian trend-setters, not traditional folk musicians who brought it there.