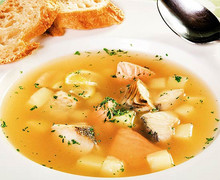 Apparently favored by Ivan the Terrible, ukha is a Russian “fish soup” that’s light and simple to prepare.

A true Russian staple, fishermen would prepare the soup over an open fire with whatever fish was caught that day.

Soups have always played an important role in Russian cuisine. Ukha began life as a simple broth but in the 16th and 17th centuries it evolved into a more diverse and elaborate dish that was served in the lavish Russian courts.

Although ukha is made from fish, it’s not technically a fish soup in the strictest sense. Traditionally, fish was used simply to flavor the water for broth with herbs and seasonings and then root vegetables such as potatoes and onions were added.

Nowadays you can use any freshwater fish, from salmon to cod, although typically smaller fish, such as perch, are used.

Fish soup was an important part of pre-revolutionary Russian cuisine; especially on Russian Orthodox fast days when meat was forbidden.

Typically, freshwater fish such as carp is more frequently eaten inland, while salmon and trout are more common in northern areas.

The fish can be preserved by salting, pickling, or smoking.

Ukha is an easy and delicious dish that can be served alone or used to accompany other traditional Russian foods.

How to make your own ukha

Boil water, add salt and make sure it’s dissolved. Add potatoes cut into quarters, fish heads and tails, finely chopped onions, carrots and parsley. Boil on low heat for 20 minutes, scooping off the white foam formed by the fish (if the broth is not clear enough for your taste, strain it). Then add laurel leaf and pepper, boil for 5 more minutes, increase the heat and add cleaned fish, cut into large chunks. Cook for 15 minutes more, add more salt if needed, throw in the herbs, take off the fire, cover the soup with a lid and let cool for 10 minutes.