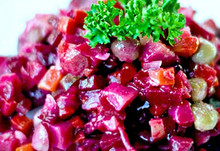 Not to be confused with the word “vinaigrette,” vinegret is a distinctively Russian twist on the traditional vegetable salad. The most obvious difference is that, unlike leafy salads with lettuce or spinach, vinegret uses boiled potatoes and chopped beets, giving it a bright red or magenta – rather than green – appearance. It’s a favorite food of many Russians, normally eaten during the holidays (especially New Year’s Eve), but many claim they could eat it every day.

Vinegret is a relatively recent addition to the Russian culinary catalog. It came into existence during the early Soviet era, at a time when fresh vegetables were difficult to find, especially in large cities, and they were often spoilt when they did reach the market. Hence, vinegret was traditionally made using canned or frozen vegetables that were easier to find and would stay preserved longer.

Theories vary on the origin of the name. Most agree that it was brought into the language as a result of the love the Russian nobility had for the French culture, taking the name vinegret from the word “vinaigrette.” The Russian language has a long history of borrowing words from other languages and “russifying” them in this way. The word vinegret can also be used in a metaphorical sense to mean a mish-mash of things.

Along with boiled potatoes and beets, vinegret usually also contains one or more of the following: carrots, onions, salted cucumbers or pickles, peas, dill, scallions, kidney beans, cabbage, sauerkraut. The ingredients are chopped and diced into small pieces and mixed together with oil – usually olive or sunflower. You can also add some vinegar, salt and pepper to taste. Vinegret is traditionally served with Russian black bread and some sort of meat or fish, like sausage or herring.

Here’s a recipe for vinegret you can enjoy (serves 4-6): 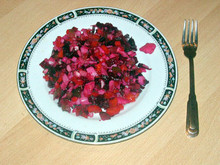 Place beets, potatoes, and carrot into a large pot, cover with cold water seasoned with salt, cover with a lid, bring to a boil. Reduce heat to medium-low, partially uncover, simmer until vegetables are tender, but not mushy. After the water boils, the carrot takes 20-30 minutes, potatoes take 30-40 minutes, and the beets take about an hour. Note that the beets never get as tender as potatoes, so if a knife pierces them easily, they are done.

Cool and peel the beets, potatoes, and carrot. Their skin will slide off quite easily, so you don't need a peeler. Use a paring knife for potatoes and carrot, and rub the beets with your hands to get the skin to slip off.

Cut all boiled vegetables into small, diced pieces and mix with diced onions, pickles, and peas.

Dress the salad with pickle juice, sunflower or olive oil, and plenty of salt and pepper. Taste and adjust seasoning. Let the salad sit in the fridge overnight or at least for several hours to allow flavors to blend.