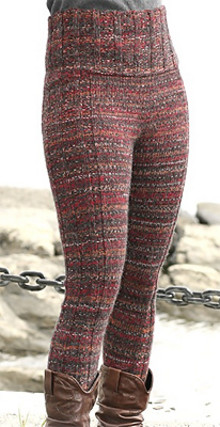 Reituzi are a specific kind of leg warmers made of wool. In Russia they became a piece of traditional cold resistant clothing worn by the young and old.

Russian word reituzi originally comes from the German reithosen, derived from Reiten – “ride” and Hosen – “trousers”, which stands for riding trousers (meaning horse riding trousers). But for Russia, they are more than riding trousers or leggings or jodhpurs: they are a piece of clothing familiar to everyone, many since early childhood.

In the 18-19th centuries they were used in the army to warm up horsemen, but the piece of clothing was assimilated by civilians, and soon every child would grow up wearing reituzi. Usually the itchy wool trousers came together with valenki and goat fiber shawls to protect the wearer from extreme subzero temperatures.

Many prominent Russian authors mentioned them in their works, like Fyodor Dostoevsky: “Sir, I used to have a pair of reituzi, very nice ones, blue check ones…”

Aleksandr Pushkin: “I am going to put on my tight reituzi and twist my mustache into curls...”

Leo Tolstoy: “He was wearing a worn out jacket with a military cross, reituzi and an officer’s sword…”

Meanwhile, elsewhere in the world, famous designers borrowed the idea of jodhpurs from horse riding to turn them into a piece of fashion. Coco Chanel was one of the first brands to turn this kind of sportswear into haute couture. In Russia, however, the leg warmers continued to serve as a means of survival in minus 40 temperatures and below.