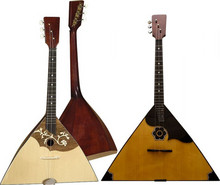 Balalaika  is a traditional Russian instrument with a wooden triangle-shaped body and three (or rarely six or four) strings. It is sometimes called a “Russian three-string guitar.”

For centuries, balalaika was a popular village folk instrument played by skomorokhs (a kind of jester-musician) to entertain people.

Together with garmon’ (accordion)  balalaika is a Russian symbol. Different characters from Russian folklore, especially bears, often play the balalaika. 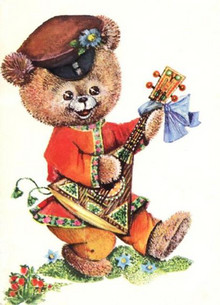 The word balalaika is similar to the Russian words “балакать,” “балаболить” and “балабонить” meaning “babble” or “jabber.” This connection not only underlines the folk origins of the balalaika but also uncovers its essence as an easy and fun instrument with a sonorous but soft and even tender voice.

Some researchers suppose that the three sides and three strings of the balalaika may symbolize the Holy Trinity. But this theory is rather weak: at different times in Russian history the instrument was banned by the Church and, moreover, musical instruments are not allowed in the Orthodox liturgy.


A more credible explanation for the triangular shape of the Russian balalaika is that it was initially made from a pumpkin: quarter a pumpkin and you get a balalaika shape!

The balalaika family includes a number of instruments from the smallest – a 60 to 70 cm long prima balalaika, to a big balalaika-contrabass measuring almost two meters.

The backs are usually made of three, six or nine sections and the balalaika’s top is always beautifully decorated. 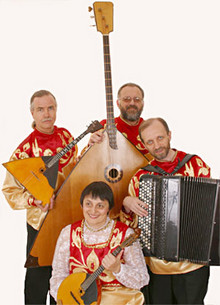 In Russia and beyond

Growing interest in Russian folk instruments from outside Russia has enhanced the popularity of the balalaika.

The balalaika has been well known in North America since the beginning of the 20th century, when the Russian Balalaika Orchestra first toured the continent. Over the past half-century a number of balalaika associations have been set up in different corners of the planet.

The balalaika is usually a vital part of orchestras and groups performing Russian traditional folk music.

But several Russian (and Soviet) or Russian-American bands also use balalaikas, or more often balalaika-like guitars, to create a special Russian national taste during their foreign tours.

The glam metal band Gorky Park, formed at the dawn of Perestroyka, months before the fall of the iron curtain and the Berlin Wall, was famous for its kitsch portrayals of western stereotypes of Russians: pseudo-traditional clothing, a hammer and sickle logo and a balalaika-like guitar were part of the band’s repertoire. 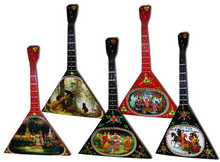 Balalaikas are produced at a number of musical instruments factories in Russia but hand-made balalaikas still remain the most precious articles. You can buy homemade and factory-made balalaikas at various musical shops in Russia and abroad or you can easily purchase one via internet.

More than just an instrument

The word balalaika is used for the MiG 21 Russian fighter jet - because of the shape of its wings.

Dukhovnost Dukhovnost’ is the Russian understanding of the spiritual potential of a person that boosts his intellectual and moral development on the road to success.