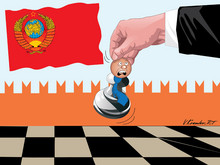 An apparatchik is a full time employee in any position of bureaucratic or political responsibility who served either in Communist Party structures or in the government.

Apparat in Russian simply means a device. But in the Soviet Union the word also referred to the abundant structures within either the Communist Party or the government, which oversaw the enforcement of decisions made by higher authorities. And apparatchiks - the people who worked there - were the “supervisors of Communist workflow.”

The way to become an apparatchik was long and hard. Each candidate was carefully checked by different Communist Party committees and the KGB. A successful candidate had to be an active Communist Party or Komsomol (Young Communist League) member; his reputation had to be flawless, and his chances were even higher if he was fit physically.

After one was made an apparatchik he faced two ways of developing his further career. One was to become a very close associate of his boss, which would increase his chances for an eventual promotion to the top of the hierarchy. The other option was an inferior one – if you failed to please your boss, you’d forever remain an adviser, and never get promoted.

All USSR leaders, except Lenin and Stalin, were apparatchiks at some stage.  Apparatchiks were the conductors of the Communist Party line in various spheres of life: they were often seen giving instructions at plants, factories, schools, museums, theaters… depending on the department the apparatchik worked in.

Top officials liked to reshuffle their apparatchiks by transferring them from one sector of the government to another: from production to agriculture, from culture to science. The lack of training or experience in the new area of responsibility did not matter as it was done as a means to increase the apparatchiks’ loyalty to their bosses. In many cases the work of such apparatchiks did more harm than good. Here are a few examples:A newly appointed head of the Department of Culture in one city invited journalists to see his newly renovated office. He proudly took a look around the room and announced: “I’ll place very nice rugs in these rooms.” Journalists were horrified when they imagined this guy censoring the plays of Anton Chekhov at the local theater. Their fears did materialize when this “boss” came up with a review of performances - he found some actors to be “lacking Communist spirit.”

At the end of 1980s Mikhail Gorbachev, who at the time was the General Secretary of the Communist Party, announced he was going to visit one of the Russia’s regions to see the development of its agriculture. Local authorities immediately gave an order to clean the farms, no matter the cost. The newly appointed head of the agricultural section, a former army colonel, ordered for all pigs to be scrubbed with shampoo to improve their looks.

When the workers objected, he threatened to expel them from the Communist Party. However, the toxic substance in the shampoo turned out fatal – two days later all pigs died. To save the situation the apparatchik genius came up with an idea to bring young pigs from another farm 100 miles away for Gorbachev’s visit. Needless to say, the General Secretary never learned about this, and was highly impressed with the clean pigs he saw at the farm.

In 1985, right after Mikhail Gorbachev made his famous speech about Perestroika – a mass restructuring of the country -  many regional Party bosses hurried to implement the new program. They immediately dispatched apparatchiks to the regions under their jurisdiction to oversee the restructuring process.

However, by that time the whole enforcement structure had rotted to the core – as long as things looked right on paper, the results were rarely checked. It took but a little time before the apparatchiks returned with reports that Perestroika had already been completed in the regions they visited.

Cases like these were not an exception. Apparatchiks all over the USSR learned to adapt to their bosses orders and desires. After all, if their boss got a promotion, it meant they too would move higher up.

The importance of being an apparatchik

However, there were also some educated apparatchiks. They were university professors whose job was lecturing factory and collective farm workers on the advantages of Socialism. Most of them preferred to tell people about interesting things that the workers missed in their life. One of these apparatchiks said: “I’m pleased with my job because I’m giving people something they don’t have. And I see smiles on their faces.”

Though the Soviet era is over, many apparatchiks have survived. They quietly transferred themselves to well-paid jobs and posts and prosper to this day. Nevertheless, their memory lives on, and  apparatchik is still used to describe a person, who causes unnecessary trouble with a bureaucratic approach to work.