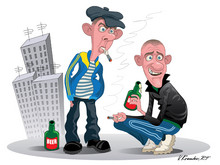 Gopnik is a slang Russian derogatory term used to describe a young, white male member of the lower class in Russia. Similar to the term ‘white trash’ or ‘redneck’ in American English, a gopnik is identified by a specific style of dress (usually athletic gear or track suits), haircut, and predilection for violence, aggressive behavior, criminality, racism towards non-ethnic Russians, smoking and alcohol abuse.

Origin of the term

Gopniks are traditionally found in the rural and provincial areas surrounding larger Russian cities, and experienced a boom in the early 1990’s. However, the gopniks have a much longer history, dating back as far as pre-revolutionary Russia.

There are multiple stories about the origin of the term gopnik. According to some sources, the term gopnik originated from the Russian acronym GOP, or Gorodskoe Obshestvo Prizreniye (translated into English as "City Public Charity") organizations. The GOP in pre-revolutionary Russia was responsible for the administration of public housing for the extremely poor and homeless. As the majority of people living in such state provided housing were homeless and given to violence and theft, the term GOPnik was coined in the Russian language to denote an individual was generally a vagrant, living in public housing and given to crime.

One specific example of this was in St. Petersburg, where, at the end of the 19th century, the Hotel Oktyabrskaya on Ligovsky Prospekt was transformed into one such institution, where poor, orphaned, and delinquent children were sent to live. After the October Revolution of 1917, the name of the organization was changed from Gorodskoe Obshestvo Prizreniye to Gosudarstvennoe Obshezhitye Proletariata (in English, “State Dormitory of the Proletariat”), but the function remained the same: essentially a dormitory for youths with a predilection for violence and criminality. The youths who lived there were derogatorily called gopniks.

Some scholars and Russian linguists argue that the term is even older, and the word Gop in Russian has always had theft and squalor at the root of its meaning.

The term gopnik, while being in active use for over a century in Russia, found new footing in the late 1980s, when a sudden spike in the number of gopniks made many in Russia view the uneducated gopnik masses as a political force in Russia.

Today, a modern gopnik is characterized by aggressive, occasionally nationalistic behavior, and dresses in a style that usually involves either real or faux athletic gear, generally taking the form of an Adidas style ‘track suit’. Attire also typically includes a specific style of cap that hides an extremely short hair-cut. The stereotypical image of a gopnik includes squatting in archways, parks, or at trolleybus stops, smoking cigarettes, drinking beer and eating sunflower seeds as a beer snack. Gopniks have their own slang words, and are also noted for their lack of proper grammar. A Gop-Stop is slang for petty theft or robbery committed by a gopnik.

While truly a prevalent phenomenon in the Russian provinces during the early 1990s, in today’s Russia, the line has become blurred as to how many gopniks there really are among the country’s current youth, and what effect and influence they have in 21st century Russia. Many argue that the gopnik subculture of the uneducated young men under 30 is no longer appealing to the youth of Russia, and that a newer, more responsible generation has emerged to take its place. However, gopniks are sure to still be found in provincial Russia, away from the big city centers, still cursing and enjoying their beer and sunflower seeds, far away from the rapidly developing infrastructures of Moscow and St. Petersburg.

Ponty The behavior of someone attempting to be cool by showing off luxurious or more often pseudo-luxurious accessories.