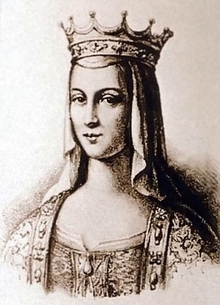 The daughter of the wise

History books remember her as a golden-haired girl from an exotic land who became queen consort and, later, regent of France. Anna was born to Yaroslav the Wise   – grand duke of Kiev and the initiator of the “golden age” of Rus – and his wife Ingegerd. Her parents insisted on giving her a good education and, by the age of 18, under the supervision of her mother, she had mastered Latin, Ancient Greek and the basics of medicine.

In 1048, the French embassage, led by the Bishop of the city of Meaux Gautier and minister of the French Court Goscelin de Chalignac, arrived in Kiev with a mission to arrange a marriage between the king of France, Henry I, and Anna. Rumors of Anna's exquisite beauty, literacy and wisdom reached many corners of Europe.

Historians still debate the reasoning behind Henry's choice of a second wife: France did not have any diplomatic or trade links with Rus at the time. However, the general consensus is that Henry couldn't find a suitable princess-bride in Europe – all the eligible young women were related to him within illegal degrees of kinship.

Apart from the king's best regards, the entourage brought exquisite swords, broadcloths and silver dishes to demonstrate their serious yet friendly intentions to woo. Being a prolific father as well as a wise ruler, Yaroslav sought to consolidate his leadership of Kiev and to give a comfortable future to his children. Profitable marriages would kill two birds with one stone. And Anna's marriage to Henry I was the most successful one of them all. 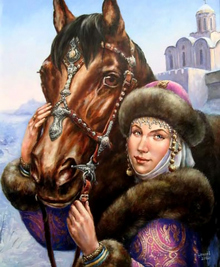 The king was more than 40 at the time of the couple's first meeting; he suffered from obesity and became spiteful, even with his concubines. However when he saw Anna, he softened and even smiled, leaning in to kiss her. After this passionate introduction, Anna is quoted to have pulled back, blushed and said: “I suppose it is you who is king…”

Their wedding – as well as Anna's coronation as Queen of France – took place in May 1049, Holy Trinity Day, in the Cathedral of the city of Reims, long-established as the site of the coronation of French kings. On the marriage contract, Anna gracefully signed her name and patronymic whilst the king of France simply put down a cross.

At her coronation, the newly-wed queen broke with tradition: instead of conforming to tradition and taking her royal vows with her hand placed on a Latin Bible, she used a Slavic Gospel, which she brought from Kiev with her.

Her letters of the period show that she wasn't fond of her new homeland, thinking it was too provincial in comparison to Kiev. In 1050 she writes to her 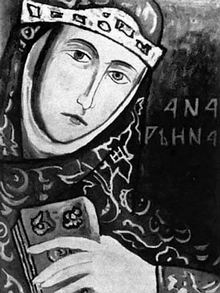 father: “What a barbarous country you sent me to – the dwellings are somber, the churches horrendous and the morals – terrible”.

There is little information regarding how Anna was received at the French court. She was, however, quick to learn the French language and keenly participated in government affairs, despite having a merely decorative post. Her name can be found on official documents, next to the king's ever-present X. The signatures read “by the approval of my spouse Anna” or “in the presence of Queen Anna”.

However, the young queen couldn't produce an heir for a long time, which probably created tension and sparked unwanted rumors. She is said to have spent long hours in prayer, pledging to found a monastery if she would successfully give birth to a prince. Finally, either thanks to her active spirituality, or more likely to the untiring efforts of her 45-year-old husband in 1053, she gave birth to her first-born son, christened Philip. Henry and Anna had two more children: Robert who died in adolescence as a highwayman, and Hugh (Hugues), who joined the first Crusades.

In 1060 Henry died, leaving the French throne to Philip, who was only seven years old at 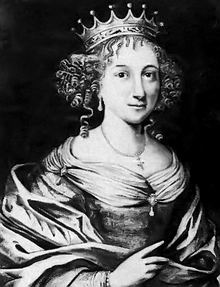 the time. Anna became the regent ruling the country in the name of her son. True to her word, she founded a monastery dedicated to St Vincent in Senlis, not far from Paris. Only a chapel has survived. A monument to Anne of Rus still stands next to the chapel. Like his father before him, Philip took Anna's advice seriously, and her signature can be found on official documents next to his.

However, such a beautiful and wise woman was unlikely to remain alone for a long time. Raoul III Peronne, Count of Crepy and Valois succumbed to the charms of the young queen from the moment she stepped on French soil. However, his feelings remained hidden until the death of the king. He kidnapped her while she was hunting and wed her in secret at his estate.

The pope refused to recognize this new union, demanding that Raul revalidate his marriage with Alienor de Montdidier-Peronne and that Anna resume her spiritual role in the French state. However, the newly-eloped couple were so open in their displays of affections and seemed to care so little about public opinion, that their union was soon accepted. According to some sources, the couple were excommunicated by the pope for “not returning to the bosom of the family”.

There is, of course, a more prosaic version of the same story. Traditionally, a widowed queen, especially a young one, was not allowed to stay without a husband. And so, once more, the most favorable candidate was chosen – Count Raoul was one of the most powerful landowners in the kingdom at the time. Whatever the truth of the matter, it is known that Anna remained with Raul until his death in 1074.

It is not known when Anna died or where she is buried. According to some historians she returned to Kiev to die; others claim that she died in France and was buried in the Vilier Abbey not far from Forte-Aleps.

Her last years were probably a lonely time: she had lost two husbands, her son and most of her family from Kiev, leaving her somewhat isolated at the French court. Phillip felt abandoned after his mother's second marriage and Anna probably spent her final years traveling around Europe in an attempt to find acceptance.