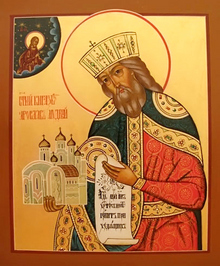 Yaroslav the Wise (image from www.hrono.info)

Yaroslav the Wise was the Grand Prince of Kiev since 1016 until his death in 1054 (with break in 1018-1019). As many historians believe, under Yaroslav Kievan Russia reached a peak of its cultural bloom and military power.

Yaroslav was born the son of Vladimir the Great and Vladimir's third wife, Rogneda of Polotsk. In his youth, Yaroslav was sent by father to rule the northern lands near Rostov the Great. In 1010 he was transferred to Novgorod the Great, as befitted a senior heir to the throne. However, it seems his relations with father grew worse with time, particularly after Vladimir bequeathed the Kievan throne to the younger son, Boris. In 1014 Yaroslav refused to pay tribute to Kiev and only Vladimir's death next year prevented a war between the father and the

A year later Yaroslav entered the feud over Vladimir's heritage, started by 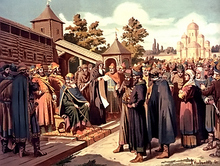 brothers. The first to occupy the Kievan throne was Svyatopolk, the oldest of at least 12 of Vladimir's sons. Chroniclers claim it was he who killed the two youngest brothers, Boris and Gleb. They were later canonized as the first Russian saints. With the help of Novgorod, Yaroslav defeated Svatopolk's troops near the town of Lyubech in 1016 and made him flee to Poland to his father-in-law, Duke Bolaslaus I. It was after this victory that Yaroslav granted Novgorod Yaroslav's Justice, believed to have been the first written code of laws in Kievan Russia. Later, Yaroslav's successors took it as a basis to create the Russian Justice, the oldest Russian code of laws.

The victory, however, did not secure calm reign for Yaroslav. In 1018 Svyatopolk returned with Polish troops and took over Kiev. But Novgorod came to the rescue again. In 1019 a unit comprised of Novgorodians and Varangians defeated Svyatopolk. Yaroslav got the Kievan throne back, while Svyatopolk fled to the West and disappeared.

In 1023 Yaroslav's younger brother Mstislav rose against him. Yaroslav fled to Novgorod, but Kievans were hostile to Mstislav, and he very soon offered Yaroslav to rule the country together. They divided the lands: Yaroslav got everything to the West of the Dnepr river, while Mstislav to the East. All this time Yaroslav preferred to stay in Novgorod. He moved to Kiev only after Mstislav deceased without heirs in 1035 and he got control over the whole of Kievan Russia.

Yaroslav was eager to extend Russian boundaries. During his reign he organized a number of military campaigns, which were for the most part successful. New territories were reclaimed in the North, North-East and North-West of the country, and new towns were founded there. In 1037 Yaroslav defeated the tribes of Pincenates, whose raids had been a long-lasting problem in the country's Southern territories. To mark the victory, Yaroslav ordered the Saint Sofia Cathedral to be built in Kiev.

Among other top priorities of Yaroslav's policy was promoting the spread of Christianity in the country, which turned from paganism to orthodoxy in 988. 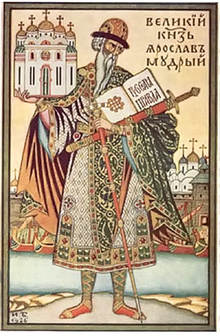 He launched translation of religious books from Byzantine Empire and other countries into Old Russian. In 1028 he established the first large school in Novgorod for some 300 children of priests and the elders. He was the one who founded the first monasteries in Russia in 1030 – the Yuriev monastery in Novgorod and the Kiev Pechersk Monastery in Kiev. Yaroslav also introduced a religious holiday on November 26th, which later became known as the “Yuriev Den” (Yury's Day), to honor the saint George also known in Russia as Yury or Yegory. In 1051 Yaroslav appointed the first Russian Metropolitan Illarion whose candidacy was approved without the sanction of the Constantinople Patriarch attempting to make Kiev the center of eastern Christianity.

During his reign Kiev has become a major trade, administrative and cultural center. A bigger part of the city was circled by wide vellum up to 14 meters high. Book writing and translation developed under his rule – he was a very educated man and owned an impressive personal library. He organized first schools for children, the most talented ones were brought to Kiev from all Russian lands. In the north east the prince founded a new city and gave it his own name – Yaroslavl.

In 1019, Yaroslav married Ingegerd Olofsdotter, daughter of the king of Sweden, known in Russia as Irene. Yaroslav and Irene had five sons and five daughters. All of them played an important role in Yaroslav's foreign policy, as he regarded dynastic marriages a good way to seal ties with other countries. Thus, he strengthened relations with the Byzantine Empire by a marriage between his son Vsevolod and a daughter of the Byzantine Emperor Konstantin Monomakh. Yaroslav's grandson from this marriage, the legendary Russian Prince Vladimir, was later dubbed 'Monomakh'. Yaroslav also arranged marriages of some of his children to European princes and princesses: his second son Izyazlav to the sister of Kazamir of Poland Gertrude; the youngest daughter Anne of Kiev to Henry I of France; Elizabeth to Harald III of Norway; Anastasia of Kiev to the future Andrew I of Hungary; granddaughter Evpraksiya to the German Emperor Henry IV and grandson Vladimir Monomakh to the daughter of the last Anglo-Saxon King Harold. 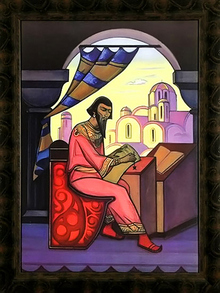 In the last years of his reign, Yaroslav foresaw the danger that could ensue from competition between his sons for power. He exhorted them to live in peace with each other and set up a system of succession of power based on principle of superiority. The first to reign in Kiev after Yaroslav was the eldest son Izyaslav, replaced later by Svyatoslav and then Vsevolod.

Yaroslav died in 1054 in Vyshgorod, outliving his wife by four years. He was buried in the Saint Sofia Cathedral in Kiev, where his sarcophagus is kept until now. Yaroslav has been called a 'saint' ever since, but he was officially canonized by Russian Orthodox Church only in 2005.

Unlike his father Vladimir the Great, who brought Russian lands to orthodoxy, Yaroslav did not become popular among his people. Scandinavian sagas call him tight-fisted. The first chronicle of Novgorod praised him, but also mentions every unworthy deed and underlines his physical flaw of lameness. However, most of Russian chroniclers of the 12th – 13th centuries called him 'The Wise', and that is how he made it into history.